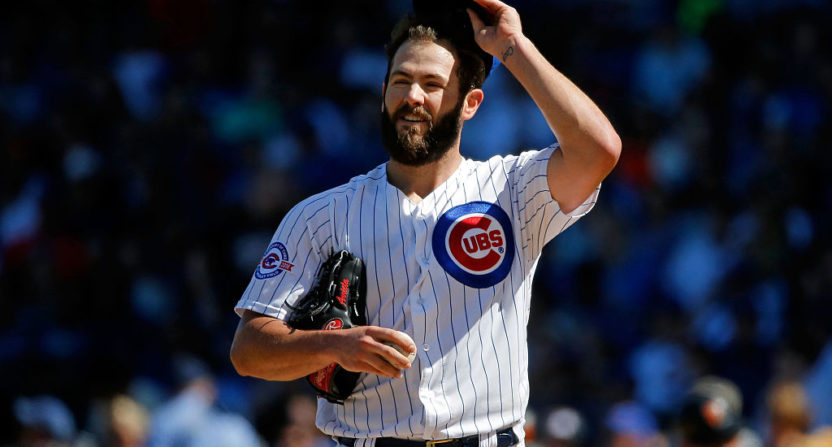 Now that the rings are fitted and the trophy sits in Wrigley Field, it’s easy to remember the 2016 Cubs season as an endless stream of clutch hits, catchy slogans and dance parties.

And yes, the Cubs won 103 games, outscored opponents by 252 runs and won the World Series in one of the greatest baseball games ever played. But it wasn’t all good.

Last July, the Cubs were really sputtering. After standing at 25-6 on May 10 and 47-20 on June 19, they went into a minor tailspin, going 5-15 over the next few weeks. When they lost to the Pirates 12-6 on July 9, they had dropped five straight and nine of 10. And although they still led the National League Central by 6.5 games and ranked among the best teams in baseball by any measure, there was some amount of concern in Cubs circles.

On July 6, Chicago Sun-Times columnist Rick Morrissey wrote a piece headlined, “When do Cubs’ struggles become something to worry about? Now.” Here was the opening paragraph:

That same day, the Chicago Tribune’s David Haugh proclaimed that, “It’s OK to worry about the Cubs,” writing that, “in the past month of mediocrity, they also have raised enough doubt that nobody in town should be in denial. No matter how good things looked early, sometimes baseball happens late. North Siders remember last October … and the last 108 years.”

Yahoo’s Tim Brown penned a column headlined, “What’s happened to the once-invincible Chicago Cubs?” Though Brown didn’t quite panic, he considered the idea that maybe the Cubs just weren’t that good.

The Cubs have played beneath themselves for just long enough to wonder if they’re the 27-25 Cubs or the 25-6 Cubs, which is maybe a little too real to dwell on.

Two more losses to the lowly Reds didn’t sooth any concerns in Wrigleyville. Hashtags like #funwhileitlasted and #WeWeGood (a play on the popular #WeAreGood meme) began popping up.

I am officially worried. Cubs r pretty much in a free fall.

Read from bottom to top, the #Cubs panic is real and definitely not out of hand at all. pic.twitter.com/7mp34ThAqr

Cubs Cubs Cubs ……… Just not ready for the World Series yet .

Another day, another Cubs loss. What. Is. Happening?

By July 9, Al Yellon of Bleed Cubbie Blue wondered whether “the wheels [were] falling off, and ESPN’s Jesse Rogers wrote as negative a game recap as you’ll find for a first-place team.

We’ll get to some good news in a few moments, but there is so much bad going on with the Chicago Cubs right now it’s hard to know where to start.

The Comeback’s own Ian Casselberry suggested it was nearing time to panic, particularly over the team’s pitching.

With that loss to the Braves, the Cubs have lost seven of their past eight games. What might be more concerning is that some of those losses were decisive, with the starting pitching that was supposed to be a strength suddenly looking vulnerable.

Overall, 85 percent of Cubs fans, according to this highly unscientific poll, reported being at least “a bit concerned.”

#Cubs fans, how would you describe your current mindset?

Then what happened? Well, the Cubs went 53-23 (with one tie) the rest of the way, then beat the Giants, Dodgers and Indians in the playoffs to capture the franchise’s first World Series title in 108 years.

A year after the Cubs were in apparent freefall, the North Siders are again struggling, sitting at 43-43, 4.5 games back of the Brewers in the NL Central. The Cubs’ dilemma this year is much, much more serious than their dilemma last year, but maybe the 2016 mid-summer panic can teach us a lesson anyway: It’s only July. There’s plenty of baseball left to play.