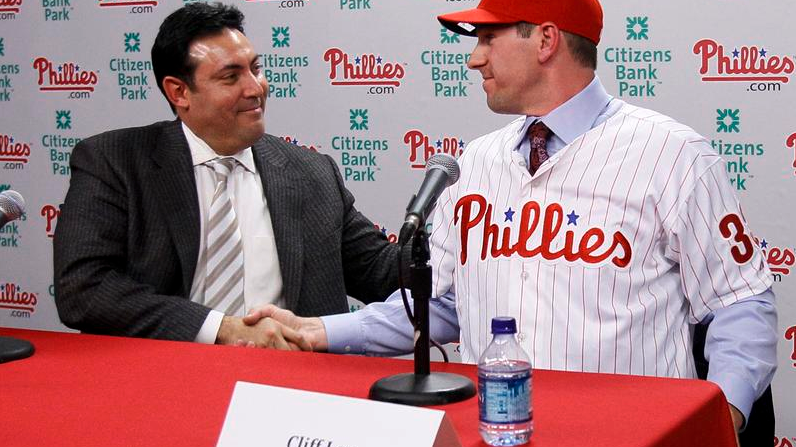 The Philadelphia Phillies ended a long championship drought in the City of Brotherly Love with a five-game World Series victory over the Tampa Bay Rays in 2008. The following season, the Phillies were once again looking like a prime title contender as the 2009 season rolled along. Knowing the team was in great position to make a second straight World Series run, general manager Ruben Amaro Jr. found a move that would help push the Phillies just a little bit more when he acquired Cliff Lee from the Cleveland Indians before the trade deadline.

A love affair was born between Phillies fans and Cliff Lee. Lee was dominant in his Phillies debut in a road game against the San Francisco Giants, a game in which he also hit a double into the gap to further ignite Phillies fans’ enthusiasm. Lee went on to dazzle in the postseason as the Phillies returned to the World Series against the New York Yankees. Lee was amazing in Game 1 in the new Yankees stadium, making at least one catch that will forever be remembered in Philadelphia sports lore…

The Phillies fell shy of a World series repeat in losing to the Yankees in six games, but Lee was responsible for both wins for the National League champions. The Phillies were still in terrific position to contend for the World Series again in 2010, but Amaro once again kept in pursuit of Toronto Blue Jays ace Roy Halladay, who had been rumored as a trade target for a while. Amaro finally got Halladay in a trade that sent a package of players and prospects to Toronto. But in order to replenish the farm system after sending a package to Toronto, Amaro felt he needed to move another player on his team. That ended up being Cliff Lee, who was sent to the Seattle Mariners in exchange for a handful of prospects to add to the farm system (none of which panned out).

Essentially, Halladay was added to replace Lee, and that turned out to be a fine situation for the Phillies. Halladay was brilliant, tossed a perfect game in the regular season and later a no-hitter in his postseason debut. Along the way to an appearance in the NLCS, the Phillies had added Roy Oswalt from the Houston Astros to construct a dominant starting rotation of Halladay, Oswalt and Hamels (and Joe Blanton). But the ultimate goal of another World Series was snapped by the Giants. Changes were coming to the Phillies, but there was still time for one last great push for a title. That offseason, Amaro managed to successfully woo Lee back to Philadelphia as a free agent, despite a significant offer on the table from the Yankees. Lee loved it in Philly the brief time he was in town and was once again warmly welcomed back to town.

With Lee sliding back into a starting rotation of Halladay, Hamels, Oswalt and Blanton, Phillies GM Amaro was heralded as the best GM in town, if not all of baseball and even sports.

One year ago Cliff Lee was traded and Roy Halladay was brought in. One year ago EXACTLY. Ruben Amaro for President!! #phillies #MLB

Ruben Amaro Jr. made a mistake one year ago… and righted it today. #clifflee #phillies

So within 2 years, Ruben Amaro acquires Cliff Lee, Roy Halladay, Roy Oswalt, Cliff Lee. Any GM in history even done anything like this???

Phillies Ruben Amaro Jr. = genius. I'm usually biased because he's my friend… but not in this case.

Ruben Amaro Jr. = Jack Bauer? Guy has some stones and just gets the job done, my goodness

There were even comparisons of Amaro and ninjas and pimps.

Ruben Amaro is a Ninja

Ruben Amaro is a pimp.

Ruben Amaro got Ed Wade to pay for Roy Oswalt and Cliff Lee to give up 50 million. Keep him away from your daughter. #Phillies

Andy Martino, who had previously covered the Phillies as a beat reporter before taking on the Mets beat for the New York Daily News called Amaro the “brashest GM on the block.”

The way things were going, Amaro and the Phillies were all in. On the surface, things were looking great, but those who dig a little deeper were seeing some concerns for the future stability of the franchise.

Ruben Amaro should just walk around with no pants on tonight. He is going to own Philadelphia for a long time.

While Amaro was busy crafting the best starting rotation baseball could have, he had also locked Ryan Howard into a mega deal that today is costing the Phillies $10 million to have Howard play in the Atlanta Braves farm system. With so much invested in the pitching rotation, the Phillies simply had no way of competing with an offer from the Washington Nationals to Jayson Werth in free agency, and one year of Raul Ibanez was nice but not for long enough. Adding Hunter Pence to the roster was another positive move for the lineup in 2010, but it also cost the Phillies a few additional prospects (including Jarred CosartDown below in the farm system, the Phillies were in a bit of a drought with no prospects that likely figured to be able to have any impact at the majors any time too soon other than Maikel Franco, perhaps. Prospect after prospect would come up and few would catch on.

The Phillies went on the decline. After winning the World Series in 2008, they lost the World Series in 2009, fell in the NLCS in 2010 and then in the NLDS against the St. Louis Cardinals in 2011. In 2012, the end of the era had become official as the Phillies were eliminated from the playoffs in the regular season. The heat was as hot as ever on Amaro, but the Phillies have a history of holding on to GMs a little too long, and this was no exception. The team finally moved on from Amaro in the GM role in September of 2015.

He certainly played all his cards and went for broke, but his lack of foresight to provide for the sustained success in Philadelphia was his downfall. Today, Amaro is coaching first base for the Boston Red Sox.

The Phillies continue to be in a rebuilding mode, just waiting for the prospects at double A and triple A to be ready.