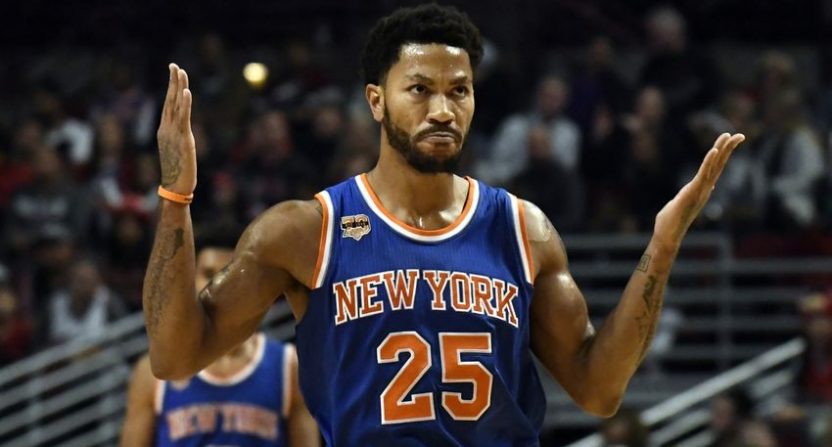 Preseason in every sport is a time for feeling good and optimistic about a team’s fortunes for the upcoming season. In the NBA, where it can take just a move or two to get a team on the right track or over the hump, it does not take much to get people buzzing about a team’s outlook. The 2016-2017 regular season is just about in the books, so now is as good a time as any to look back on some fantastic offseason thoughts and predictions that blew up in spectacular fashion.

The Knicks make it so easy sometimes, partly because they play in New York and tend to get much more attention than they deserve just based on the location. The Knicks haven’t really been relevant for years, arguably decades with the exception of a blip here or there, so anyone putting faith in them this season was bound to be playing with fire. They just got burned.

Kevin Durant set the basketball world on fire with debate over the concept of super teams. His leaving Oklahoma City to join the Golden State Warriors was the boiling point for silly offseason NBA debates to fill air time and column space with critics ripping him for not being able to beat Golden State and now latching on just to win. This was so silly on so many levels, because isn’t winning the ultimate goal? While much of the offseason attention was placed on Golden State’s formation of a super team, the New York Knicks were busy making moves to build around Carmelo Anthony. The addition of Derrick Rose and Joakim Noah was, supposedly, a giant step in the right direction for the Knicks and the newest Knickerbocker went so far as to suggest on multiple occasions the Knicks should be considered a super team too.

“I mean, with these teams right now, they’re saying us and Golden State are the super teams, and they’re trying not to build that many super teams, and Adam Silver came out with the statement and this and that,” Rose said to reporters back in July, when nobody was really saying that about the Knicks. Or were they?

The Knicks and Derrick Rose fell just short of being a superteam https://t.co/u0UuvhBv9G pic.twitter.com/jGdtBDCfa7

The Knicks are the 2nd best team in the east. @jasonrmcintyre explains pic.twitter.com/1ZNnIqUkPA

The Celtics clinched no worse than the No. 2 seed in the Eastern Conference. The Raptors are just one game behind Cleveland in the Eastern Conference standings, and the Hawks have won three of four regular season meetings with the Cavs. The Knicks finished 20 games under .500 this season, just two games ahead of the Philadelphia 76ers. But hey, at least the Knicks won the preseason.

Perhaps it makes sense to go from the Knicks to the Bulls given two key pieces from Chicago’s roster were removed from the equation to ignite a rebuild. That plan in Chicago included signing free agent Dwayne Wade and adding Rajon Rondo and Michael Carter-Williams to the mix to go with Jimmy Butler. Things actually seemed to get of to a relatively decent start in Chicago, which inspired some optimism about how the team was quickly coming together. After a nice little 8-4 start to the season, the early reports were all positive from Chicago.

Watching the Bulls preseason games got me so hype for the regular season. The chemistry is so much better than it's been in years.

Great win for the Bulls. Thx for listening! Gar/Pax did an outstanding job this off season. Love the depth and chemistry is terrific .

Rondo: "Until you’re inside this locker room, you don’t understand our chemistry and how we fight for another."

The funny part about chemistry is sometimes it can take some time for your mixture to boil over and explode. Over the course of the regular season, things got much tenser and demoralizing in Chicago. Rondo went nuclear on his teammates and the Bulls front office after getting benched. Wade and Butler took shots at teammates and their efforts. Players supposedly started to ignore the play calling of head coach Fred Hoiberg. The Bulls may have snuck into the playoffs, but it sure seems as though this season cannot end soon enough.

The Bulls and Heat were intertwined in their rebuilding projects this past year due to the Dwayne Wade connection. The Heat parted ways with their longtime franchise player, the best player in franchise history, while the Bulls picked up the veteran for one last run. The rebuilding of the Heat was expected by some, most notably Bill Simmons, to finally get things kicking and make a serious push for strong playoff footing.

Miami is Boston's biggest threat for numero uno. Only a matter of time before Hassan Whiteside starts missing games with "knee soreness." pic.twitter.com/mXzAcrJVl4

Obviously, that never panned out. The Heat did just miss the playoffs, but had a remarkable turnaround in the second half of the season. After going 11-30 to start, the Miami went 30-11 to end the season, but missed out on the postseason by one game.

It seems like ages ago when the Los Angeles Lakers were annual favorites to win the NBA championship but Shaq is long gone and enjoying a career in broadcasting and Kobe Bryant set sail for retirement after last season. The downward spiral for the Lakers has been going on for a few years now, and this season was no different. The Lakers raised eyebrows with the signing of Timofey Mozgov to a four-year, $64 million contract in free agency. Who exactly was Mozgov? A back-up center for the Cleveland Cavaliers. Did the Lakers just sign a guy off the Cavs bench just to add some championship chemistry to the team? There may be no other way to explain it, and the performance this season has suggested or reaffirmed the idea the Lakers made a bad call.

As of this writing, here is what the Lakers have been paying for:

But not everybody thought it was a bad move at the time. Give credit to George Wrighster III though for owning up to this summer prediction.

@OldTakesExposed I was just thinking about this 3 days ago!!! Damn I couldn't have been more wrong. Happens…

Oh, and here is Skip Bayless…

Both the Lakers and the Knicks will make the playoffs. More @Undisputed, now on FS1 https://t.co/v4z6iQmbjG

The Lakers were not the only NBA team to make a bad free agent signing. The Trail Blazers signed Evan Turner to a four-year deal valued at $70 million. But at least they’ll be going to the postseason, much to the chagrin of another seemingly bad offseason signing: Chandler Parsons, of the Memphis Grizzlies.

The Rockets surprised a whole bunch of people this season, finishing 3rd in the Western Conference with a 55-27 record.  Who was the most surprised?  Probably Bleacher Report. Before the season, they had Houston finishing 11th in the West with a 38-44 record.

The NBA regular season was fun, but the playoffs are just about here and there will be many more predictions sure to go horribly wrong.