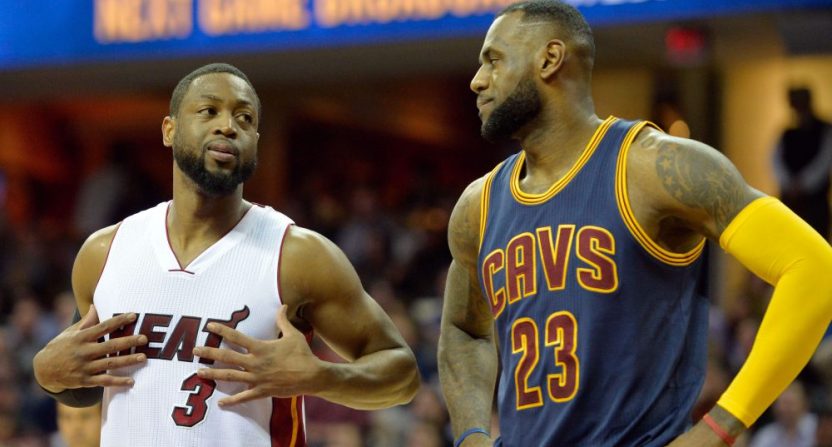 When it comes to LeBron James, there appears to never be a drought on opinions about what he should or should do with his career. In fairness, The King did bring much of that on himself back in the summer of 2010 with The Decision, the televised announcement about what team he was going to sign with in free agency that some people have just never gotten over. At the time, James left Cleveland, a franchise he was clearly carrying on his shoulders with little support, and signed with the Miami Heat, where he would play with Dwayne Wade and fellow free agent signee Chris Bosh and win back-to-back championships and make two other NBA Finals appearances.

In the summer of 2014, James opted out of his contract in Miami and made the decision to return home to Cleveland with the Cavs having built through the draft in James’ absence to put together a much stronger supporting cast. Leaving Miami for Cleveland seems unusual to some, and many could not comprehend just how meaningful it was for James to return home. James was on a mission to lead his home team to an elusive NBA title, but there were stumbles along the way. In LeBron’s first season in Cleveland, the Cavs came very close to winning the championship, but fell in six games to Golden State in the NBA finals with injuries to key players contributing to the defeat.

The 2015-16 regular season was a bit rockier for the LeBron-led Cavaliers.  In January, head coach David Blatt was unceremoniously ousted and replaced by assistant Tyronn Lue, and by early March, chatter about whether LeBron made a mistake leaving the Heat to go to Cleveland started to pickup…

Speaking of the NBA, you all know LeBron wishes he had never left Miami, right? #LetsGoHeat

Do you think LeBron regrets his decision to return to the #Cavs? @AnezSez wants to know your thoughts. https://t.co/2Mxwmakyh3

The bumpiness of LeBron’s 2016 regular season hit its max level when James and the Cavs were blown out by the Heat 102-101 in Miami on March 19, the Cavs’ sixth loss in its previous 15 games and LeBron’s fourth road loss to the Heat in four tries since returning to Cleveland. Throughout the game, Heat fans jumped on Lebron. At one point, when the Heat were up 33 in the fourth quarter, the Miami crowd began chants of “LeBron needs [Heat president Pat] Riley.” After the game, LeBron praised his former teammates and gave hugs to some Heat players on the court. A sign of good sportsmanship was not enough to avoid any possible hot takes about this night….

LeBron just can't wait to hug Heat players after his team got destroyed by them. Terrible look, King. Whiteside almost embarrassed by it.

Bad look for LeBron to fraternize with Wade during blowout? https://t.co/ppKACAGgFm

VIDEO: Is it a bad look for #Cavs LeBron to be chummy with Dwyane Wade during and after blowout loss? https://t.co/0WYKQpXWlV

Wade: How you like me now?
LeBron: Please forgive me, I hate my teammates.
Wade: I love mine. @NBC6Sports pic.twitter.com/HrKz7vDYjt

With the Heat destroying James and the Cavs and the Cavs struggling a bit, the “LeBron regrets leaving Miami,” narrative was too juicy for sportswriters to pass up.

According to Greg Cote of The Miami Herald, James needed Wade and Bosh in order to avoid a legacy of being a failure.

“Someday, James will take stock of where it all went wrong. Maybe it’s 2023 and he’s retired and bored enough to take a first meeting with the person who will be ghostwriting his memoirs. Only then will he begin to confront the overarching reality that — for all of his undeniable greatness and accomplishments — failure in many ways ultimately defined his NBA career.”

It gets better. When predicting the confessions James would include in his memoirs, Cote predicts James would admit to letting the people of Cleveland down.

“He failed Cleveland. Let down his people. Went home for the expressed purpose of gifting his city with a championship parade and could not deliver. It wasn’t that he personally didn’t do enough; it was that he got blindsided by the game-altering phenomena that was Curry and the Golden State Warriors.”

“He took my crown as the best player in the league,” LeBron on truth serum would admit. “He took the rings that I thought would belong to me and to Cleveland.”

Colin Cowherd was on the same page as well. Here’s his gem…

LeBron’s friendship with Wade and his possible regret from leaving Miami were not the only topics of conversation.  Just two days after the Miami loss, LeBron “unfollowed” the Cavaliers official accounts on both Twitter and Instagram.  Predictably, the internet reacted by going nuts.

LeBron is acting out for attention again. My column on his petulance is evergreen… https://t.co/Z6q79a8PaA pic.twitter.com/XyPTW1NkZd

LeBron's passive aggressiveness is almost funny, but it's not.

It won't be much longer until LeBron James unfollows Kyrie Irving at this rate….

It all ended up being for naught.

After the Heat missed the playoffs entirely in the first year without James, they were bounced in the Eastern Conference semifinals last season, and are in a real struggle just to get to the playoffs this season, their first in 13 years without Dwayne Wade (now with the Chicago Bulls).

The Cavaliers have played in the last two NBA Finals. In 2015, they lost to Golden State, but anyone who watched that series knows James played like a series MVP and was the only reason the injury-depleted Cavs hung around as long as they did. Last summer, James and the Cavs finally celebrated a long-awaited NBA title.

It’s probably save to say that LeBron is not feeling any regret about leaving Miami.