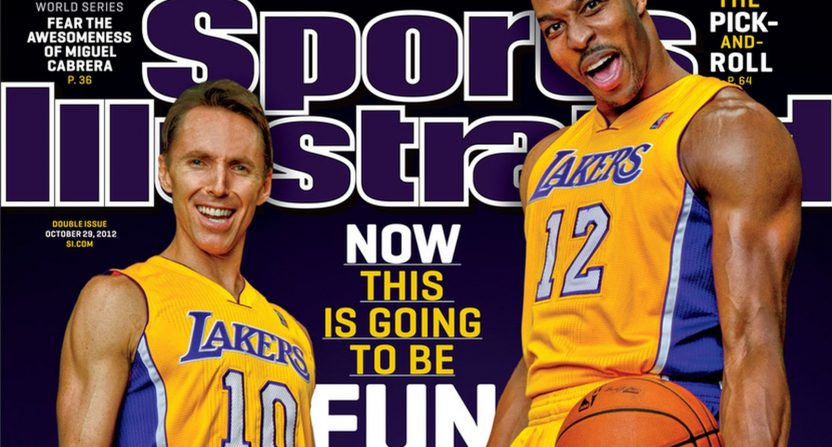 After the Los Angeles Lakers’ changes this week, removing executive vice-president of basketball operations Jim Buss and general manager Mitch Kupchak in favor of Magic Johnson, it’s worth looking back at when the Buss and Kupchak duo were widely praised in 2012 for landing Dwight Howard and Steve Nash. That led to the infamous-in-retrospect Sports Illustrated cover above, and to the Lee Jenkins story it featured, titled “Is This the Face of a Bad Guy?” The story was mostly about Howard, but it had some interesting thoughts on how the Lakers’ new-look lineup would work and how Howard would be their long-term answer:

Howard lives in Los Angeles full time now, the centerpiece of what could be the most decorated starting lineup ever, one that includes the best player of his era, the best point guard, the best big man and the most skilled 7-footer. The Lakers evoke obvious comparisons with the Heat, but L.A.’s superstars should adjust to each other more easily than Miami’s because their defining individual talents do not overlap: Steve Nash is the passer, Kobe Bryant the scorer, Pau Gasol the playmaker, Howard the finisher and rim protector. Metta World Peace is sort of like the bouncer. “The pieces just fit,” Bryant says.

…Four Lakers starters are 32 or older—including Nash, who is 38—so unlike the Heat they harbor no delusions of becoming a dynasty. They are trying to pick off another championship while grooming Howard to lead the organization forward. He is both attraction and apprentice.

…Starting in early July, L.A. acquired Nash and Howard in a span of 35 days, surrendering nothing but draft picks, spare parts and center Andrew Bynum. The summer of 2012 will take its place in franchise history alongside the summer of 1996, when the Lakers landed Bryant and Shaquille O’Neal—unless Howard declines to re-sign with the club after he becomes a free agent on July 1, 2013, forfeiting approximately $25 million, according to the new collective bargaining agreement. “We don’t know what he’s going to do,” Kupchak says. “We have no idea. Our feeling all along was, Let’s just get him here, with Kobe and Steve and Pau, and we’ll take our chances.”

SI’s NBA preview in that issue also was high on the Lakers, projecting them to finish second in the West:

The Lakers’ hopes of winning their third title in five seasons depend on two new stars a dozen years apart. They need 38-year-old Steve Nash to create easy baskets and revamp their half-court offense, providing penetration and better three-point production to a team that suffered in both areas. (Los Angeles was 23rd in threes made and 26th in three-point shooting.) More important, Nash will have to find a way to integrate Kobe Bryant, Dwight Howard and Pau Gasol while keeping everyone happy—and keeping himself healthy amid so many demands.

The 26-year-old Howard, who has won three Defensive Player of the Year awards, can electrify Staples Center with blocked shots, outlet passes to Nash and dunks in transition. After two lousy years in Orlando of mixed messages and ambivalent motivations, he can dramatically reinvent himself by contributing to a championship. But will Howard see the importance of that?

Many on Twitter were even less restrained, predicting an instant championship when news of the Howard trade first broke in August 2012:

You better close down Figueroa 'cause I smell a parade in the works! Watch out Jordan, watch out Boston… Watch out NBA, Lakers are back!!

@DylanDykes that won't be happening.. nobody will stop the Lakers next year

Whos gonna beat the Lakers tho?

Dwight Howard to the Lakers is officially done. I smell a Championship ring…

This Lakers team, if healthy, cannot be beat. Not by Heat, not by Thunder…nobody. Congrats to Mitch Kupchak. Does it again.

Congrats to The L.A. Lakers on their 2013 championship.

YES! Howard to the lakers, and we still keep Gasol. The championship is back to LA #nba

Best thing about Dwight to Lakers? Kobe won't be getting credit for ring number 6

Here is some more Lakers praise:

LeBron's biggest PR error was going to a small market team. Dwight's L.A. arrival is a heralding due to media presence

@KingJames, by the way, still has nothing to say about DH trade..I asked, he declined..but Heat isn't Lakers biggest obstacle..its OKC

I'm trying to find a weakness on the Lakers' team, and I can't find one other than possible injuries. But every team has that weakness.

Charley Rosen breaks down the Dwight Howard trade, which he calls the trade of the century. http://t.co/DgePVZwB

As a Lakers fan I couldn't be any happier.

Turner Sports’ Charles Barkley was high on the Lakers too:

Charles Barkley on NBA TV about Lakers: "It’s enough to win the world championship. … This just makes the Lakers the team to beat."

As were ESPN’s Dan Le Batard and Michael Wilbon:

@daskeeza lakers starting five would have chance against anybody, including team USA

"I know we're talking about paper & not hardwood right now, but I would put the @Lakers ahead of @OKCThunder" –@RealMikeWilbon on SC

Other NBA scouts liked the Lakers’ looks too:

Lots figured the NBA would come down to them and the Big Three of the Heat:

HEAT FANS THE LAKERS JUST GOT A 100 ROUND CLIP!!GUNNING FOR YOU!!

Let's cut right to the chase and make Miami vs Los Angeles Lakers a best of 82 series. No need to wait til June

Ok. I'm awake now that Dwight Howard has been traded. You can book your #Heat vs #Lakers tixx for the #NBAFinals in June.

#Heat vs #Lakers will be a battle of "Old School Hoops vs New School Hoops." Traditional vs Unconventional. So awesome.

I'm ready to break down the 2013 NBA Finals between Heat & Lakers right now. Seriously… Not kidding. Got the telestrator I bought on EBay

It's official. The #Lakers will beat the #Heat in six games in the 2013 NBA Finals.

Lakers vs. Heat is going to be one of the most epic Finals ever.

I guess Miami's reign will be brief #Lakers

So, are we all in agreeance the star-studded #Lakers and #Heat are on a crash course for a date in the NBA Finals?

Dear David Stern; please cancel the NBA regular season so we can watch the Lakers play the Heat in the finals already. Signed, everyone.

I'm already excited for Lakers vs. Thunder in the conference finals and then Lakers vs Heat in the finals.

And many predicted dynasty status:

This is why I've been a fan of the Lakers since I knew what basketball was… They build dynasties again and again!

I feel like the last time this happened, there was a threepeat. Welcome, Dwight. I'd like you to meet Kobe, Pau and Steve. #Lakers

The likes of Mike Greenberg, Colin Cowherd, and  Stephen A. Smith weighed in:

I'd like to congratulate the #Lakers for winning the 2013 NBA championship.

Barring any last minute snag, D-Howard will be a Laker by tomorrow. Bynum will be in Philly. And we'll all expect a Lakers/Heat Finals.

Wow….. Dwight Howard to the lakers. How much fun is this gonna be to watch?

And one guy in particular, Shane Young, got very declarative about this team:

Welcome to LA Dwight, Earl Clark, Chris Duhon, and Jodie Meeks! You all WILL be wearing a Ring after next Summer. Kobe is estatic too

WE GET JODIE MEEKS TOO!!!!! IM TELLING EVERYONE, MY LAKERS WILL WIN 75 GAMES THIS SEASON. BREAK MJ'S RECORD

Even the players were pretty confident:

Kobe Bryant: "I have spoken to Dwight Howard already and we are locked and loaded to bring back the title."

Kobe Bryant on Los Angeles Lakers management (Jim Buss and Mitch Kupchak): "Wow, what a summer Jimmy and Mitch have had so far. Unreal!"

"Having Dwight with us, it's going to be a big deal." Pau Gasol postgame.

The part that perhaps looks funniest in retrospect are all the people praising EVP Buss and GM Kupchak:

If Mitch Kupchak pulls this off, 1 of the greatest trades in Lakers history. Nash Kobe Pau Dwight. Going out, Bynum, 1st round pick. #LAKERS

Mitch Kupchick may be the greatest NBA GM of all time. I knew he'd figure it out- exciting 4 the Lakers.

Give Lakers GM Mitch Kupchal the Executive of the Year award. Wow!!!!

The Lakers are such a smart franchise, knowing that Kobe will be done in the next couple of years, they now have Dwight to solidify……

Amazing to me Lakers get Howard and keep Pau. Buss family miracle workers over the years. Exciting day for Lakers and the fans. #wow

Lakers are gonna have a scary lineup,next yr! Howard,Gasol,Artest,Kobe and Nash? WOW! The Buss family showing how much they want to win!!

Mitch Kupchak is in the lead for Executive of the Year Award by trading for Dwight Howard, Steve Nash, and signing Antawn Jamison. #Lakers

Mitch Kupchak is a GOD!!!! #Lakers

Hurt by Nash and Bryant getting injured and Howard never quite fitting in, Los Angeles went 45-37 in 2012-13, earned a seventh seed in the West on the final day of the season, and lost to the Spurs in the first round (without the injured Bryant). Howard signed with the Rockets that offseason, while Nash stuck around while battling injuries for two further years, but retired in 2015. The Lakers went 27-55, 21-61 and 17-65 after 2012-13, and they were 19-39 and second-last in the West as of Wednesday. So this move really wasn’t all that fun, except for fans of other teams.