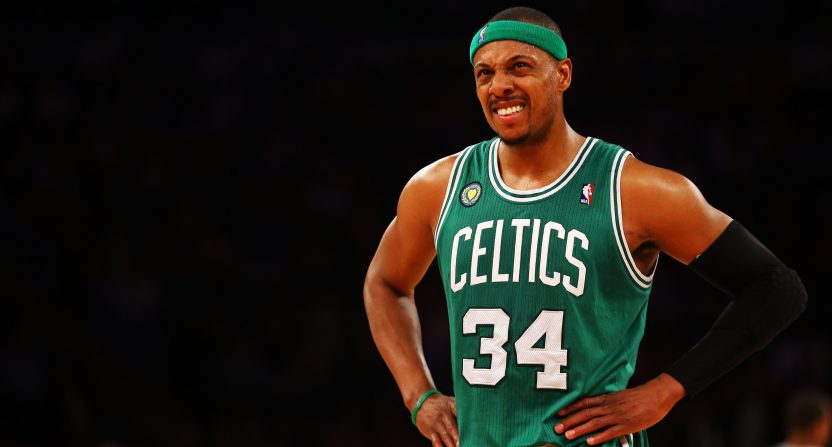 After a 19-year NBA career, Paul Piece appears to be calling it quits. The 10-time All-Star’s career (likely) came to a close Sunday when the Jazz eliminated his Clippers team from the NBA playoffs.

When we look back at Pierce’s career, we’ll remember him in a green Celtics jersey, perhaps celebrating the 2008 NBA title he won with the franchise that had drafted him almost a decade earlier. And while Pierce had many, many memorable moments in Boston, his time there wasn’t always smooth.

In fact, for a few years there it seemed like every day someone or other was calling for the Celtics to trade Pierce.

On April 6, 2005, with Pierce wrapping up his fourth straight All-Star season on a team that would win its division, the Patriot Ledger in Quincy, Massachusetts published a column headlined, “Celts should consider dealing Pierce, who’s no longer a good fit.” Here’s a particularly fiery excerpt:

On a team that thrives on running and ball movement, Pierce has become dead weight. He’s [Antoine] Walker in his first Celtics incarnation, a star who thinks he can, and should, do it all. He’s become obsessed with taking on the scoring burden. He’s a dribbling fool who shuns the easy pass at the expense of dribbling into the teeth of the defense.

That June, ESPN reported that the Celtics might trade Pierce—maybe to the Trail Blazers for Nick Van Exel and the No. 3 overall pick—and though general manager Danny Ainge called that “ludicrous,” some writers liked the idea.

The Providence Journal wrote on June 18, 2005 that it was time to cut ties.

The word is Paul Pierce will be moved this offseason, that the Celtics’ owners want him out after his flameout in the playoffs.

And given Danny Ainge’s new contract extension, the timing makes sense because the pressure no longer is on Ainge. Not now, anyway. A year ago, he would have taken major heat for trading Pierce. Not now. Not after Pierce turned off many Celtics fans with his behavior at the end of the sixth game against the Pacers. Scratch a Celtics fan now, and odds are they would love to see Pierce moved.

For this is Ainge’s chance to continue to put his stamp on this team, to remake it in his own image, one that’s more and more looking like that will not include Pierce.

In October, an ESPN Celtics preview essentially became a referendum on Pierce. Will Perdue questioned Pierce’s “mental attitude,” Chris Broussard opined that “Pierce must go,” and Ric Bucher wrote that, “Who [the Celtics] are this season won’t be decided until they move Paul Pierce.”

Two weeks later, the Palm Beach Post made a series of bold predictions about the NBA. Some were wise (“A Pat Riley coaching rumor will surface”) while others were not (Detroit’s Darko Milicic will finally produce). Among those prophecies was this one: “The Celtics will trade Paul Pierce.” That prediction was accompanied by this explanation:

It was an uneasy alliance last season between Pierce and Celtics coach Doc Rivers, and while they put on a happy face during training camp, this duo won’t last the season. The Celtics are young and they’ll need veterans in return. Figure on Pierce going to a team looking for offense in the playoff push.

Not long after that, Pierce himself became convinced he should be traded.

In January 2006, Pierce told the Boston Herald he’d like to play for a title contender. Asked about being traded, he reportedly said, “It’s something I’d give a lot of thought to,” before adding that, “A career is defined by winning games and championships.”

1. Trade Pierce now. I mean, RIGHT NOW. Get what you can, whether it’s Luol Deng and picks from Chicago, Corey Maggette and Shaun Livingston from the Clippers or whatever. If they can convince Isiah to take Pierce and the Mark Blount/Raef LaFrentz/Brian Scalabrine/Dan Dickau “Salary Cap Poison Package” for expiring contracts and Channing Frye, even better.

In February 2007, a nascent Barstool Sports demanded in bold font that the Celtics trade Pierce after the NBA Draft.

Keeping him out all year with real or imagined injuries may help them get a top lottery pick, but at that point how much time will it take the “new” franchise player to develop? A year? Two years? Three? During that time Paul will be aging and agitated with another rebuilding process. Why not explore what the Celtics could get now, rather than just have Pierce “sit out.” Cut him loose like Philly did with Iverson. Maybe they are thinking about it, or maybe UB is just talking out of his ass. Either way consider this, the next big free throw he makes will be his 1st, and once the draft happens the Paul Pierce era ends.

The question of whether to trade Pierce was still being asked in June 2007, when the Sun Journal in Lewiston, Maine ran the headline, “Trading Pierce may be best move Celtics can make to improve team.” In that column, Randy Whitehouse wrote that Ainge should deal Pierce, who was again hinting at trade demands. After all, he figured, it’s not like the Celtics were actually going to get Kevin Garnett.

Well we all know how this ends. Boston kept Pierce and Doc Rivers, added Garnett and Ray Allen and won the 2008 NBA title. Pierce lasted five more seasons in Boston after that and wound up second in franchise history in points scored.

Eventually the Celtics did trade Paul Pierce, along with Garnett. That deal landed them four first-round picks from the Brooklyn Nets, a return that is still paying dividends.

It seems Boston was wise to wait.