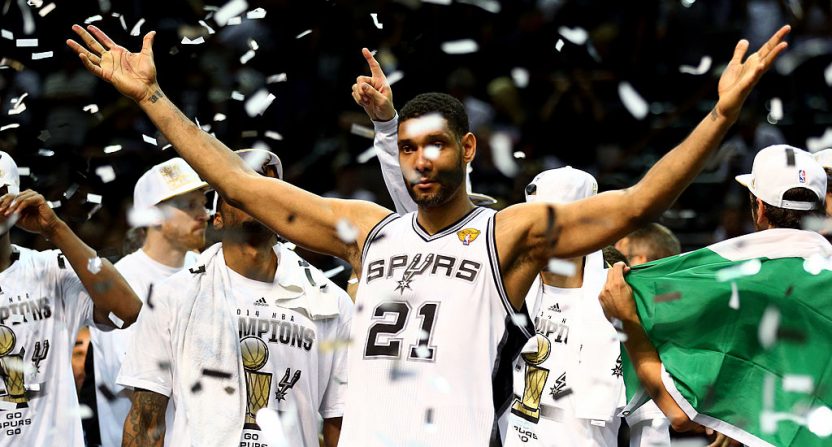 The San Antonio Spurs have made the NBA playoffs for a 20th consecutive time, the longest current streak in major North American leagues (thanks to the Detroit Red Wings’ streak ending after 25 years this season). They’re the second seed in the Western Conference after posting a 61-21 record, their third season with over 60 wins in the last five years and their 20th straight non-lockout season with at least 50 wins. They also have been to two NBA Finals in the last five years, winning in 2013-14. Despite that, though, many thought the Spurs’ dynasty was over following the 2010-11 season, where they went 61-21 and clinched the West’s top seed but lost 4-2 to the Memphis Grizzlies in the first round (with an injured Manu Ginobili). Here are some of those then-scorching-hot, now-freezing-cold takes. Ryan Wolstat of the Toronto Sun delivered one of the earliest ones, writing the Spurs off after Game Five:

End of an era Spurs dynasty is done. Always respected them though didn't much enjoy all the flopping/dirtiness. Props to the Grizz

The Spurs were/are one of the truly greatest cores of a team in NBA history. So much consistency. So much poise. Everything's got an end.

My heart hurts. Go Spurs Go. The end of era

RT @YannisHW: This isn't the end of an era, the era ended in 2007 – haven't been true contenders since, just a good team.

To be fair to San Antonio, this run has lasted at least two years longer than it should have.

Last night of the Spurs dynasty. Tip of the cap to a classy org. We'll see how many "diehard fans" stick around during the lean years ahead

End of a dynasty tonight. #spurs

I'm pretty sure the Spurs are going to blow it up now. Kind of sad

The takes continued a day later with a lot of obituaries for the Spurs’ dynasty:

Next playoffs will be a half decade since the last Spurs title. Think the era ended long ago

New column: My #Spurs eulogy. Liked how this one turned out – http://tinyurl.com/3dp2ov8

The Rockies RT @DanDoverspike @PeterBurnsRadio Which has the most promising next 5 years: Tebow in Denver or Spurs?

The end of an empire. Spurs fans object, but here's why this feels like the funeral pyre for Duncan's Spurs. http://bit.ly/iSvFMz

The Spurs are in trouble, says @teamziller, because Tim Duncan Is regressing and there's no successor. http://sbn.to/jRivGy

#Spurs #Grizzlies #NBA. #Spurs: end of the Duncan, Parker, and Ginobili era. Hopes the next one would start soon. A reinventarse caballeros

Tim Duncan rated eighth greatest baller of all time by Slam. "Virtually unguardable post game". But is this end of an era for his Spurs? Yep

Tim Duncan, you're one of the greatest of alltime. Now hold still while I shovel dirt on your cadaver

If the #Spurs lose this game, that may very well be the end of the Duncan-Manu-Parker era. #rootingformemphis

Quick: someone give Tim Duncan a new car and let's consider this his retirement game.

Hell, this could be the last time we see Tim Duncan playing basketball.

Why do I feel like things will never be the same again… great series by the #Grizzlies. Sad if this is it for the Duncan #Spurs.

So how does this work? Is the Tim Duncan era officially over now? Even if he hangs on a couple more years? #Spurs #NBAPlayoffs

My latest blog post: The ending of the Duncan Dynasty (and why NBA small ball is bullsh). http://juniormiller1310.blogspot.com/

Yeah, that criticism of NBA small-ball didn’t hold up so well. And neither did Chris Mannix’s take that it would be “real hard” for the Spurs to improve that summer:

RT @ehom87 Is this the end for the Spurs? … Writing column about it this week. Say this: going to be real hard to improve this summer

They did just that in the summer of 2011, trading George Hill to the Pacers for the 15th overall pick and using that on Kawhi Leonard, then selecting Cory Joseph 29th overall. Leonard in particular has been the most vital part of the Spurs’ resurgence; he won the NBA Finals MVP in 2014, has been named to two all-star teams and one first-team all-NBA team, and has become one of the NBA’s best players.

It’s easy to understand why some thought the Spurs’ dynasty might be done back in 2011, as they didn’t have a ton of incredibly promising young players that season and were picking 29th overall. Still, the move to send Hill to the Pacers and then acquire Leonard was a huge one, and they saw something in Leonard that so many teams ahead of them in the draft missed. They also started featuring their younger players more the following season and saving the legs of Duncan, Tony Parker and Manu Ginobili, and that paid off.

The Spurs also got more production out of those top three in their last seasons than you might expect from a typical NBA aging curve. Parker and Ginobili are still playing, but in lesser roles, while Duncan retired after last season, but all of them managed to be effective long after the 2010-11 season. There were good reasons to think that the Spurs’ dynasty might finally be over following that loss to the Grizzlies, but a lot of the takes burying the team were too declarative, and they sure turned out to be cold in the end. As Yogi Berra once said, it ain’t over ’til it’s over.