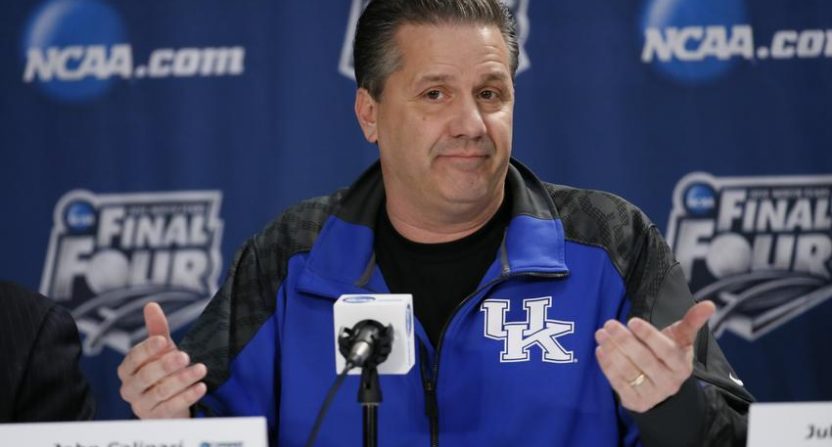 When Kentucky hired John Calipari in 2009, most around the program were thrilled.  The Wildcats now had a proven coach after a disastrous two-year stretch under Billy Gillispie.  However, although most felt success would bet a given under Coach Cal, there were some concerns about NCAA investigations and penalties handed down to the UMass and Memphis basketball programs relating to actions that occurred at while he was the head coach at each school.

But even with the past NCAA issues, most thought the hire was a coup for a program that needed it.  But that was not the case for Lexington Herald Leader columnist Mark Story.  Story seemed to believe that the school made a deal with the devil, and that the sky was falling in Lexington.

“You better get ready, Dr. Todd. Your sleepless nights have just begun.”

That was the warning Story issued to former University of Kentucky president Lee T. Todd Jr. in May 2009, roughly two months after Calipari was hired. It was articulated in an open letter column to the former president of the University of Kentucky after Calipari’s former program had been accused to have committed academic fraud. The headline in print was bold: “Calipari is Kentucky’s problem now.”

In the piece, Story took a look at Calipari’s history as a head coach, detailed the disturbing trend of various scandals and violations everywhere he worked, and reminded that Kentucky was no stranger to the NCAA infractions process already at the time. Surely hiring Calipari was only going to lead to more scandal distractions in Lexington, right?

“Now you, Dr. Todd, as president of one of the most penalized schools in NCAA history, have hired a coach who may soon have Final Four trips from two different schools “vacated” due to rules infractions on his watch,” Story said. “That would be a proud entry on the legacy of a university president, wouldn’t it?”

Calipari did have a history, of course. At UMass, Calipari’s best player (Marcus Camby) was reported to have accepted $40,000 in cash and gifts from an agent, leading to the vacating of the program’s 1996 Final Four run. About a decade later, Derrick Rose was ruled to have been an ineligible player and led to the NCAA vacating the entire 2007-2008 season for Memphis, when the Tigers were the national runners-up. The NCAA informed Calipari the coach was not a target of the investigation, as was the case at UMass.

So fast forward to today. Calipari’s one-and-done approach to building and winning at Kentucky has drawn its critics, but since his arrival in Lexington, the biggest issue the university has run into with the NCAA under Calipari has been a dispute over just how many games Calipari has won. On February 26, 2011, Kentucky honored Calipari for winning his 500th career game. The only problem was that was not technically true because the NCAA had previously vacated games coach by Calipari at Memphis and UMass. The NCAA officially recognizes Calipari’s 500th win over a year later, on March 15, 2012.

Todd retired as university president in the summer of 2011. By that point in time, the dispute over Calipari’s 500th win was the biggest infraction on record since his hire.  Calipari coached Kentucky to a national championship the season after Todd’s retirement, but the rebound of the storied basketball program had already been written with a Final Four appearance and a previous regional final appearance.

This is just a guess, but I would dare to say Dr. Todd found some good reasons to sleep comfortably at night.