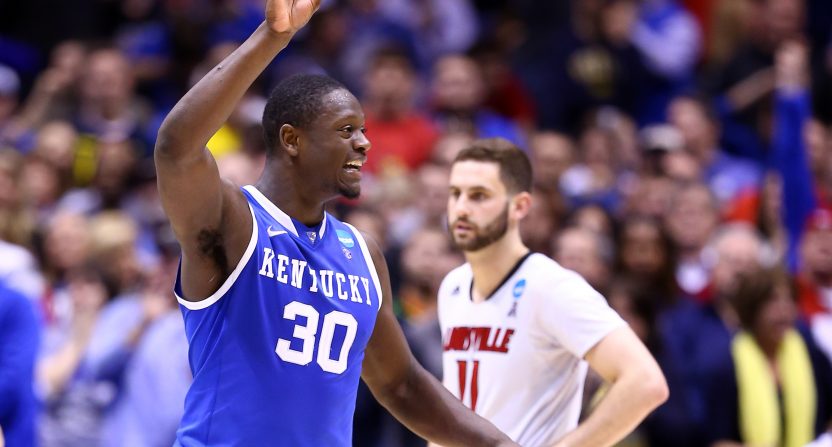 College rivalries are great, and the Kentucky-Louisville rivalry is one of the most heated. This is especially true in college basketball, where the rivalry between the Wildcats and Cardinals rivals some of the best rivalries in sports. When defending national champion Louisville matched up with their rivals from Lexington, revenge was on the mind for the Cardinals. And a good fast start to the Sweet 16 matchup gave Cardinal fans plenty to crow about. In the end, however, they would end up eating that crow.

Kentucky had defeated Louisville in the regular season but the tournament was supposed to be a different story with an experienced contender in No. 4 seed Louisville going the distance against a team of freshmen seeded eighth in the same region. Kentucky was riding high after edging the region’s No. 1 seed, Wichita State (78-76), and John Calipari stuck to his gameplan and hoped for the best against the Cardinals. It worked.

Here is a look at the starting lineups from that tournament game. While Louisville was starting an experienced bunch with three seniors and a junior and sophomore, Kentucky put five freshmen on the court. The Cardinals were also a favorite in the game.

Kentucky beat Louisville by 7. Cards are favored by 4 1/2 in the rematch Friday night. Why? Ask a Vegas insider. http://t.co/ddVyku60cW

Once the game got underway, Lousiville appeared to take early control of the game, opening up an 18-5 lead. Despite the fact more than half of the game was still to be played, a 13-point lead early in the first half appeared to be all that was needed for some to declare the Wildcats’ postseason run officially over.

It’s been a valiant underdog run for scrappy 8-seed Kentucky, but they look overmatched early against the defending national champs.

In 2 days, John Calipari can get out of his contract and not owe Kentucky a penny.

Geez Kentucky. This is ugly. And not in a good way. #BBN

"Look at me. Look at me. I'm the captain now." — Louisville to Kentucky.

Louisville is gonna show what having seniors and vets does

It makes me oddly happy to see John Calipari and Kentucky's one-and-done players getting housed.

What time does Kentucky play?

This is the part of the game where Pitino gives Calipari the Shooter McGavin and takes a sip of Coconut water.

There's just a different vibe with Louisville right now. The Cards look like they're chasing a title. The Wildcats look tired.

This is what happens when a college team plays a high school team. #Louisville #Kentucky

Louisville is a ferocious animal so far. Kentucky looks like they're still in the kitty pen. Geeez

Louisville running Kentucky off the court.

Well, this got out of hand in a hurry. Kentucky looks like a team full of freshmen and that blank stare from Cal is telling.

Louisville is running a clinic on UK. Michigan should be shook as they watch this.

In the spirit of full disclosure, even this particular writer foolishly got in on the fun…

One of the joys of March Madness is watching CBS and Turner trot out NBA studio analyst Charles Barkley. It has become a bit of a running gag how unprepared Barkley is when it comes to the tournament, but he speaks his mind and surely knows a thing or two about the game. So when Barkley predicted Kentucky was going to dominate Louisville, some fans took to ridiculing Si Charles while slamming Kentucky’s lackluster start.

As the first half continued, Kentucky closed the gap and started to swing the momentum in their favor and cutting the Louisville lead to as little as one point in the final minute of the half. At halftime, the Wildcats were down only three points, 34-31. Kentucky continued to keep pace with Louisville in the second half, even tying the game roughly five minutes after the halftime break, but the Cardinals maintained their upper hand for much of the half and slowly rebuilt their lead to as many as seven points with five minutes to play. Then, with a 64-57 lead, Kentucky went on a run and Louisville started falling apart with missed shots and turnovers.

A layup by Kentucky’s Alex Poythress pulled the Wildcats to within one (66-65). A free throw off a foul on the layup tied the game at 66-66. Another free throw moments later gave Kentucky a lead and an Aaron Harrison three-pointer with 40 seconds to play gave Kentucky a 70-68 lead it would not yield in the 74-69 victory.

A poor shooting performance from Louisville’s Russ Smith (9-for-20, including 1-for-7 from three-point range) and a balanced scoring effort from Kentucky’s starters (Julius Randle, Dakari Johnson, and Aaron Harrison all had 15 points; Andrew Harrison scored 14) proved to be instrumental in Kentucky surviving and advancing to the Elite Eight.

Kentucky went on to edge Michigan in the Midwest regional final to advance to the Final Four, and a 74-73 victory over Wisconsin sent the Wildcats on to the national championship game. The magic would run out there against another surprising team, Connecticut, in a matchup of No. 7 and No. 8 seeds, but a victory over Louisville in the tournament gave Kentucky fans some bragging rights throughout the state of Kentucky.