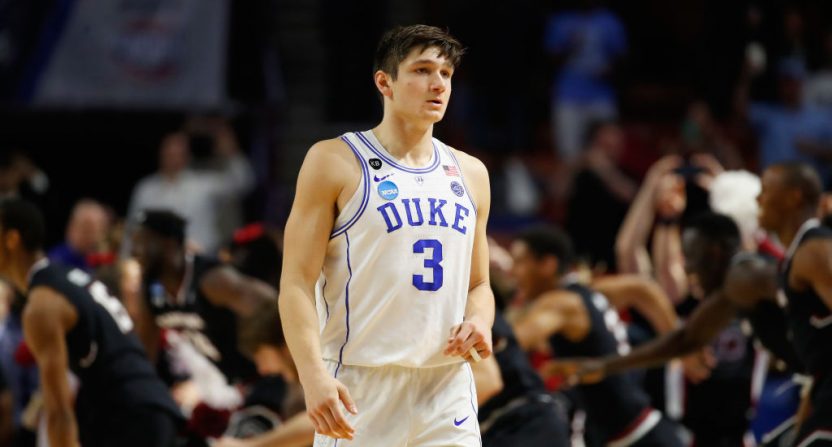 Approaching this year’s NCAA tournament, things looked very good for the Atlantic Coast Conference. They got nine teams into the tournament (counting Wake Forest, which lost their First Four game), more than any conference other than the Big East (11 in 2011) had ever done, and had a 10th, Syracuse, as the most-complained-about omission. Even before Selection Sunday, many were talking about how this was “the best league in the history of the sport.”

With Duke’s loss to South Carolina Sunday, though, the ACC has just one Sweet 16 team left, behind all four other power conferences (three each) and even the Big East (two). That’s a big step down from the five teams the conference sent to the Sweet 16 in 2015 and the six they sent in 2016, and is reasonably indicative that this wasn’t actually the best season in ACC history, let alone the best in the history of college basketball. Here are some tweets on the 2016-17 ACC that look pretty silly in hindsight, starting off with perhaps the most fervent, CBS/WFAN/FanRag Sports’ Jon Rothstein:

It will be a miscarriage of justice if less than 11 ACC teams make the NCAA Tournament. Best conference in the history of the sport.

.@JonRothstein "When you really study the numbers, the ACC (this year) is the best league in the history of the sport"

The depth is this year's ACC is what makes it better than any other league. Bottom of conference wound up eating the middle. CC: @wallyball. https://t.co/0Qxp5Hf64h

Eight days away from Selection Sunday and 11 ACC teams still have a chance to make the NCAA Tournament. Best league in history of the sport.

While Rothstein was the most adamant promoter of this theory, he was far from alone. Here are some of the other media personalities who declared the 2016-17 ACC the best ever:

@FireBrownell aren't many excuses for him, BUT he kept most games in the ACC competitive this year. Against the best conference in history

Best conference in the country!
Ever? 😉 #ACC https://t.co/AWFyR1qMhA

"I think this is the best the #ACC there has ever been because it's the deepest it's ever been." –@bwood_33 to @DAonCBS

Is the 2016-17 ACC conference the best ever? Great spot with Larranaga. https://t.co/f3coImsTYb

From yesterday: On cue, the ACC has become the best basketball league ever https://t.co/j4XTM51eFD

That Bradley piece (in the Atlanta Journal-Constitution on March 11) is worth a look, as it includes a 2013 quote that may have set this “best ever” talk in motion from an interesting source; Duke’s Mike Krzyzewski.

In sum, the ACC has become what Mike Krzyzewski predicted before his Duke Blue Devils played in a 2013 regional final in Indianapolis. Quoth Coach K: “For all these schools that have joined, it makes us the most powerful basketball conference, I think, ever.”

Krzyzewski’s appraisal came attached to an admonition: “I hope our league is able to understand the assets that we’ve accumulated and what it does to the assets we already have. I think if positioned properly, it sets us apart from anybody. And we shouldn’t look at where football is or whatever. We have the best assets as a result of Louisville, Syracuse, Pitt, Notre Dame, and the assets we have — we’re joining together. I mean, we better know how to make use of it.”

Others have certainly followed Krzyzewski in shouting the “best basketball conference” mantra, too, and not all of them are just those who regularly cover ACC teams. National voices have joined in, too. Here’s Marc Tracy of The New York Times in a Feb. 22 piece titled “This A.C.C. Might Be the Best Basketball League Ever“:

No matter what happens, numerous people familiar with both leagues agreed that the Big East of 2010-11, which included eventual champion Connecticut, is not as good as the A.C.C. of this season.

“Looking at the A.C.C., they probably have more depth, because some of the so-called bottom teams like Georgia Tech and Pitt and others have gone and beaten good teams,” said Mike Tranghese, a former Big East commissioner. (Tranghese is now a consultant on basketball matters for the Southeastern Conference.)

Notre Dame Coach Mike Brey, who led the Fighting Irish to second place in the Big East’s regular season in 2010-11 and currently has them fifth in the A.C.C., agreed. “I think this one’s tougher than that Big East year we got 11 in,” he said, because “the so-called bottom of the league is better than the bottom of the Big East back then.”

That’s all well and good, and the strength of the “bottom of the league” is actually one part not accounted for in NCAA tournament results (as those teams didn’t qualify, but the top teams (apart from still-alive North Carolina) certainly didn’t impress. Four (Miami, Louisville, Duke and Florida State) were knocked off by lower seeds, with third-seeded Florida State’s 91-66 loss to 11th-seeded Xavier perhaps being the most embarrassing. Notre Dame, Virginia, Virginia Tech and Wake Forest didn’t look good in their losses either.

The 2016-17 ACC may have produced a lot of parity, but it only produced one Sweet 16 berth. (Of course, those eleven Big East teams in 2011 only produced two, so that’s worth keeping in mind as well.) One Sweet 16 berth is a pretty good argument that it wasn’t “the best conference in the history of the sport,” and it makes a lot of those old hot takes about the ACC’s greatness look pretty frozen at this point.