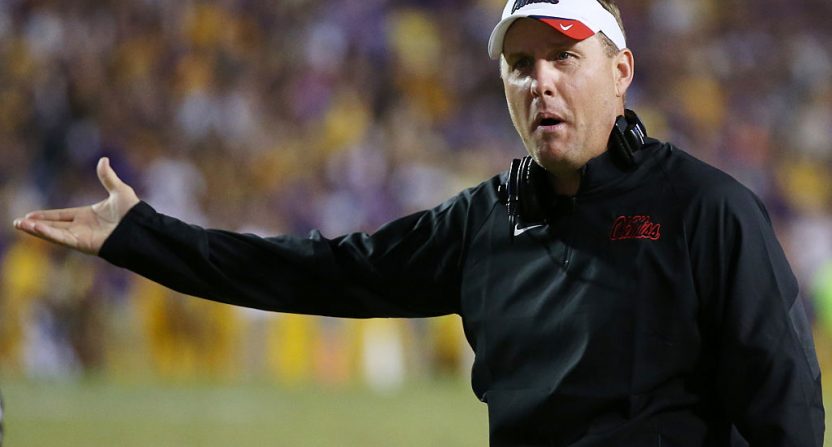 On Wednesday Ole Miss dropped a bombshell on the college football world, self-imposing a one year postseason ban for the 2017 season and forfeiting several million dollars in postseason revenue. The reason why? Four of the most dreaded words in the NCAA were hovering over the Ole Miss football program – “lack of institutional control.”

With new allegations against the program for providing extra benefits to recruits, and a charge against Hugh Freeze for failing to control his staff, his future in Oxford (and the future success of the Ole Miss program) is suddenly hanging in limbo.

Freeze’s first season in Oxford came in 2012. The next offseason, he catapulted the program into the top of the national recruiting rankings. After being ranked 47th in the 24/7 recruiting rankings in 2012, Ole Miss shot all the way to the #8 slot with five star recruits like Robert Nkemdiche, Laremy Tunsil, and Laquon Treadwell all committed to the Rebels.

With whispers and rumors surrounding the program, Freeze infamously tweeted the e-mail address of his compliance department, later deleting the tweet.

RT @CoachHughFreeze: If you have facts about a violation, email compliance@olemiss.edu. If not, please don't slander the young men

Freeze said he was "really shocked" by accusations which led to his now infamous tweet regarding how OM was recruiting. #OleMiss

The skeptics were definitely out in full force regarding Ole Miss’ sudden success on the recruiting trail.

How is ole miss getting all these guys? I mean seriously? Anyone know? Did they all get in a group text and say hey let's go to ole miss???

How did Ole Miss pull all these great players?

Ole Miss must have a Cadillac dealer in their back pocket. How are they getting all these players? As many top 300's as the entire big12 wtf

seriously, how much did #olemiss spend on this class? Is there any other explanation?

With so many questions surrounding Freeze and Ole Miss recruiting, he went on a full court press to defend himself and his program to the media. If there really was something improper going on, Freeze was going to find the real perpetrators of NCAA rules violations… or something like that.

"We're running a program with integrity. If there's things out there people know, I want to know." Hugh Freeze on critics.

Hugh Freeze on suspicions that Ole Miss went dirty this year: "I want to know if there's something going on." … Not the best answer …

Freeze spoke to ESPN for a piece that ran on February 6th, 2013, defending his eye-popping, high-rated five star class. In that piece, Freeze affirmed he and Ole Miss were doing things “the right way”:

I want to know if there’s something going on,” Freeze said. “There’s too much at stake for our program, our coaches and our families. I know the way we’re doing it, and we’re doing it the right way. If somebody has got something, they need to come on with it. It gets frustrating to get bombarded with it constantly. People take it way too far, and it’s not fair to our players and their families to have to read it. It’s one thing to suspect something and it’s another thing to start naming names. I was really shocked by the amount of it and crudeness of it.”

And to CBS for another article from February 6th, where Freeze begged for critics to come to Ole Miss and see the success for themselves:

“I say that they need to come and visit,” Freeze said. “They need to come and see. The same critics are the same ones who say that Oxford is the No. 1 college town in the nation to live in and that the Grove is the No. 1 tailgate experience in the nation. It’s the No. 2-safest community in America. And again, the ones who don’t want to be critics are looking reasonably at, ‘Look at the natural tie-ins they had.’ And the momentum that was created and the plan we had to bring in all of those kids in on the same weekend and the excitement level that was around our program that weekend did a great job of selling what we can do here and that it can be a special place.

“I understand that there are going to be critics. That’s part of it. It’s unfortunate that the kids can get tied up in that. Obviously, people can criticize me all they want. I know we’ve done it with integrity and we’ve built relationships with these people. I’m not foolish enough to believe that if we didn’t have these tie-ins, that we would be sitting in this setting today talking about all of this. It’s just kind of been the perfect storm for us and we’re elated that it’s gone this way. [We won’t say] ‘if someone else steals a kid from someone, it’s OK, but let’s not rock the apple cart and start messing with the top dogs’ … that’s our mission here.”

And there Freeze was sticking up for himself at Sports Illustrated for an article published on February 7th, 2013:

Freeze flatly denies any NCAA malfeasance. He insists he and his staff had a plan and executed it with the aid of some good fortune. In fact, it wasn’t so much of a plan as an all-in recruiting gamble. If it hadn’t worked — if Nkemdiche, Tunsil, Treadwell, cornerback Tony Conner, receiver Quincy Adeboyejo and offensive tackle Austin Golson hadn’t signed their names and dialed a 662 fax number on Wednesday — Freeze and his assistants would have had to scrap everything. They would have wasted a year recruiting, and they would have overhauled their entire player-gathering operation because of it. But they didn’t waste that year. The plan worked. On Wednesday, ESPN analysts talked so much about the Rebels that athletic director Ross Bjork called the day “a 12-hour commercial for Ole Miss football.” Even LeBron James noticed, and when he did, Ole Miss assistants gathered around the War Room round table screamed “Retweet!” in unison.

A little luck, a little divine intervention, a good vision, and $15,000 cash goes a long way in the recruiting world. In the years after the high-profile 2013 class, Freeze’s recruiting classes finished 15th, 17th, 5th, and 30th in the national 24/7 rankings.

Of course, it’s fascinating to see how narratives change over the years, especially with regards to NCAA recruiting violations and providing extra benefits to players. Jim Tressel was painted as a scheming supervillain in the wake of TattooGate at Ohio State. With Freeze’s job in jeopardy, he’s already being painted as a possible “sympathetic figure” who just got caught up in the true realities of NCAA recruiting.

Yes, perhaps it is the NCAA that needs to change their rules and the system is broken, but that’s another argument for another day. As the head coach, if Hugh Freeze is going to proclaim that Ole Miss was doing things “the right way” all these years then the responsibility falls on his shoulders. And with the way he invited the microscope to be upon Oxford, he’s first in line to answer for what’s brought to light.