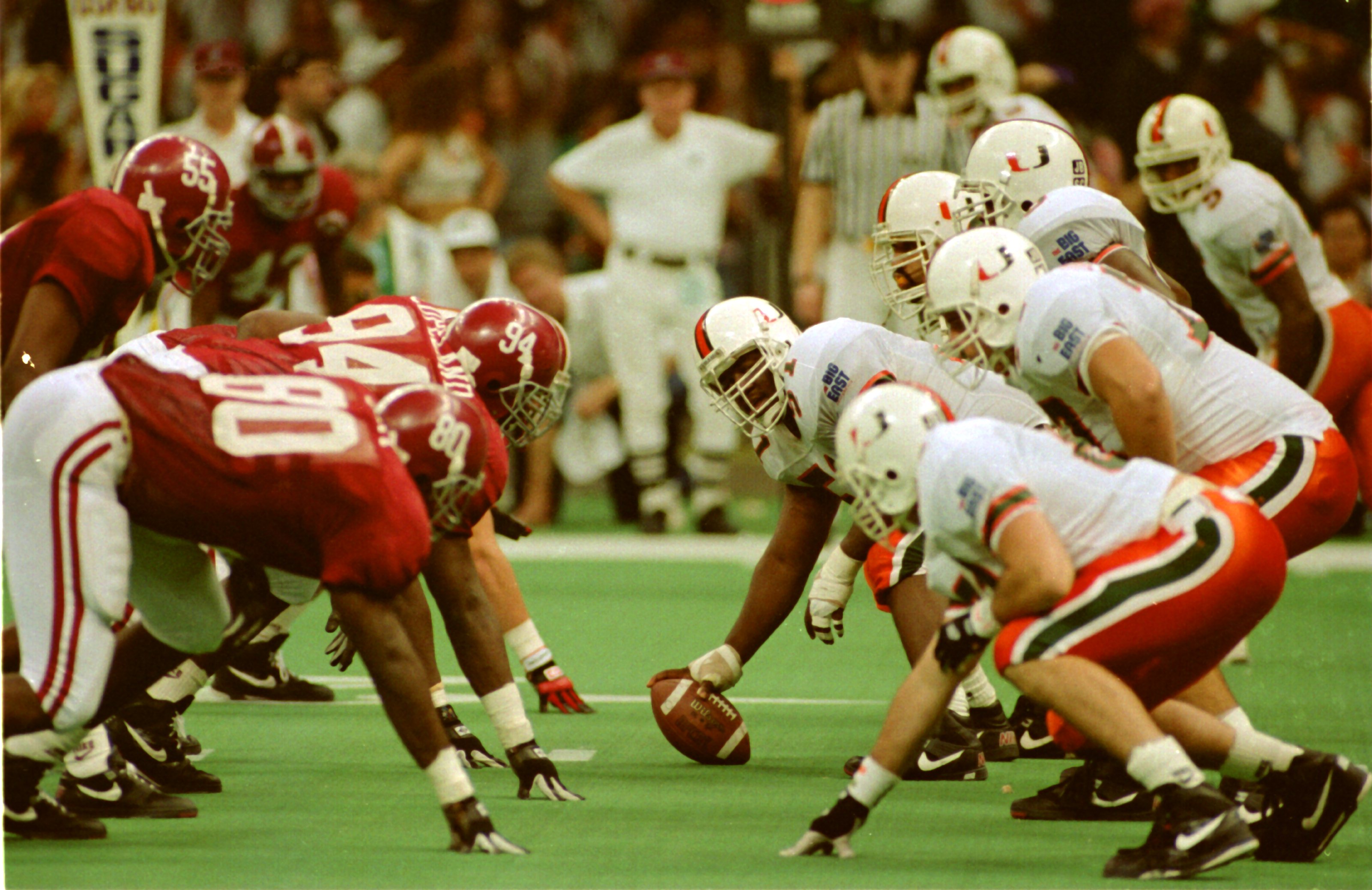 Back in January 1993, the college football world was in for a change. Following two seasons of split national championships (between Georgia Tech and Colorado in 1990-91 and between Miami and Washington in 1991-92), the Bowl Coalition (predecessor to the Bowl Alliance and the Bowl Championship Series) was formed to try and force a national championship game, and its inaugural matchup was the 11-0 Big East champion and top-ranked Miami Hurricanes against the 12-0 SEC champion and #2-ranked Alabama Crimson Tide in the Sugar Bowl on January 1.

The Hurricanes were favored, especially thanks to coming off a national championship season, but the Tide wound up winning in impressive fashion, ending up with a 34-13 victory. That made a lot of Miami’s pre-game trash talk, from receiver Lamar Thomas (who had an important touchdown-nullifying fumble in the game on “The Strip“) in particular, not hold up so well in retrospect. Here’s a look at some of what the Hurricanes said before this contest:

And as the countdown shortens to the No. 1-vs.-No. 2 showdown of Miami and Alabama in the USF&G Sugar Bowl, one gets the feeling the Hurricanes are more amused at the way the Tide is trying to talk than they are worried about how the Tide and its top-rated defense might be able to walk.

“It’s just a ‘Cane thing,” said wide receiver Lamar Thomas, as if that one line offered all the insight that was needed. “Those boys from Alabama should just come in and be quiet and try to play football. They shouldn’t come out and try to keep up with the way we talk.”

…”Just tell those boys to show up on Friday night,” said [linebacker Micheal] Barrow. “That’s when we’ll teach them how to do the walk.”

Earlier in the week, the French Quarter was host to an ugly incident between Miami and Alabama players. Basically, the Miami players taunted, the Alabama guys listened. “They called us names I can’t use in the paper,” said Derrick Lassic, the Crimson Tide’s leading rusher. “They were right up in our faces, saying us blankety-blanks don’t deserve to be on the same field with them. We just shook our heads. They were out of control.”

The verbal trashing, naturally, has spilled into the interview rooms, where hundreds of national media folk hang on every nasty word. Not a day passes when a Miami player doesn’t ridicule and undermine the opponent, no abuser louder than one Rohan Marley. You may have heard of his late father, Bob. It seems Rohan has given new meaning to the Marleyesque reggae term, Jammin’.

“Alabama has no passing game,” said Marley, a feisty 5-8 linebacker. “And one-dimensional teams are not complete teams. I know it’s going to be a good night for us.”

Real men don’t play zone. At least that’s how Miami wide receiver Lamar Thomas has it figured.Thomas looks at Alabama cornerbacks Antonio Langham and George Teague and sees nothing that scares him.

“I don’t really consider their corners two of the best in the nation, because it’s their defensive line that makes them so good,” Thomas said Wednesday. “Their corners never come out of zone coverage, so they’re not good cover men. I don’t think they’re great corners; they’re OK corners. I think they should get out of their zone and be real men.”

“They’ve been doing some talking about how their defense is going to score against us,” he said. “I don’t think their offense can score against our defense, so they’re probably going to need it.”

That one’s particularly funny in retrospect considering what Teague did against Thomas on the famous “The Strip” play:

That play was eventually nullified by an Alabama offside, but it still mattered; without it, Miami could have declined the penalty and taken the touchdown. And it let Teague get the last laugh against Thomas. Here’s one more set of takes from Miami players, in The Chicago Sun-Times, “The ‘Cane Thing No One Can Get,” published Jan. 1, 1993:

…And some argue their legacy is diluted by three championships that were won in their backyard at the Orange Bowl.

“That’s just jealousy,” Barrow said. “How do you argue with what we’ve accomplished? We think we’re second to none, to be honest with you. You’re not going to beat us.”

Plenty of media also got in on the hot predictions that went badly wrong:

…So Miami goes for its fifth title in 10 years against five-time winner Alabama. Miami’s offense, No. 3 in passing and No. 12 overall, vs. ‘Bama’s No. 1 defense. Irresistible force vs. immovable object. Can’t wait, huh?

Well, sorry. The point spread is Miami by 8, the second-largest of today’s games (FSU is a 10 1/2-point favorite over No. 11 Nebraska, and that’s conservative). The bookies know Gino Torretta and his corps of future-all-pro receivers will be Alabama’s first Top 20 offensive test. Heck, Florida scored 21 points vs. ‘Bama in the SEC Championship with the NCAA’s No. 31 — 31! — offense.

…Tonight? Miami scores twice early, and the defenses take over. Somewhere, ‘Bama manages a touchdown, by its defense. Miami scores again to win 21-7. Fans nod off in the fourth quarter, waiting for a rally that never comes.

Let’s guess Miami 11, Alabama 0, in a national championship game of no touchdowns and a few complaints from the guys who move the chains, their feet having gone to sleep from inactivity.

…It is plumb difficult to imagine how the Crimson Tide offense will score.

Chances are it will. A studied forecast would say it won’t.

Miami’s defense combines raw strength with liquid quickness in a way that suggests to the opponent: Diversify or go home. It allowed 11.5 points a game, a skinny figure  bloated  by the transgressions of the second- and third- string teams in blowout fourth quarters. Up against this, Alabama brings an attack (loose usage of the word) that rests squarely in Downtown Conservative, a ski-lift offense: uphill, plodding, frequent stops, not prone to err.

And maybe the hottest one yet, from The Palm Beach Post, a Dec. 31, 1992 piece titled “If This Is A Showdown, Someone Wake The Canes”:

So lopsided is analysis of this matchup that even New Orleans Mayor Sidney Barthelemy publicly predicts a Miami victory. Bayou politicians normally wouldn’t pick between a gator and a snake for fear that the loser might bite back at election time. The broad consensus here, however, and also in Las Vegas, is that the polls already are closed, both AP and USA Today/CNN.   Of all the bowl games threatening the durability of marriages and remote channel-flippers in the next 40 hours or so, only two have point spreads wider than Miami’s  81/2-point edge over the undefeated Crimson Tide. This mandated national championship game, crowning glory of the bowl coalition, belongs in The Big Easy because that’s the way everybody but Alabamans figure Friday night’s competition will be remembered.

… Admit it, there’s nothing in all of sports quite like the thrill of a New Year’s Day matchup between No. 1 Miami and No. 2 Whoever.

And even the Bourbon Street psychics got it wrong, as illustrated by this “Sugar Canes” piece from The Miami Herald on Dec. 31, 1992:

Drunk and desperate, the University of Alabama fan stumbled into a Bourbon Street voodoo shop, begging for a curse against the Miami Hurricanes.

“He knew his team was in trouble,” said Dottie, the 64- year-old psychic who read his future, but promised no hex. Her prediction made him feel even worse.

“Miami will win,” she said. “They’re the better team.”