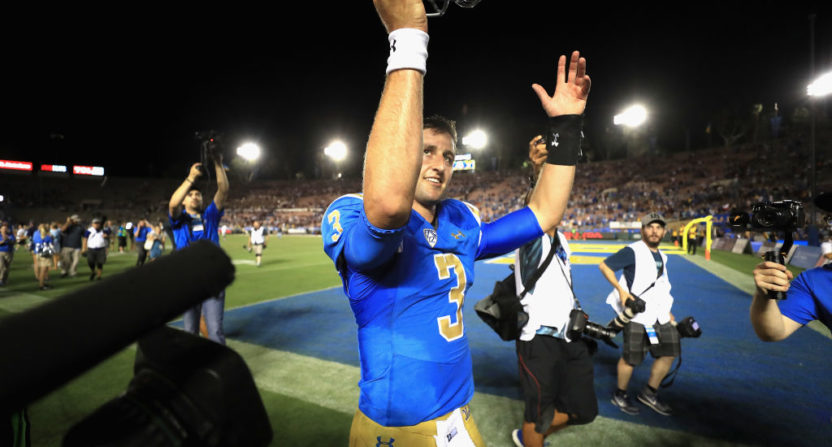 UCLA pulled off an unthinkable comeback victory over Texas A&M Sunday night in Pasadena. Down 44-10 at one point in the third quarter, the Bruins fired off 35 unanswered points to beat the Aggies 45-44. Here are some tweets from when UCLA was losing badly, including some gems about UCLA coach Jim Mora Jr, and quarterback Josh Rosen…

Texas A and M is welcoming UCLA to the SEC

This must be what it feels like to be a UCLA fan today pic.twitter.com/QWEG2AkBra

Yikes, UCLA’s AD might be waiting for Mora in the locker room to fire him at halftime. Beatdown.

At halftime Jim Mora should walk into the tunnel and out into the ocean.

Forget championship belts. A&M has a pimp cane. Game was over before it started pic.twitter.com/ci4GbucEM7

This is the most embarrassing performance for UCLA football since … ?

Someone's gotta write that "Texas A&M looks like a real threat to Bama in the West" column tonight. Right? Am I right?

Looks like my UCLA friends at work will suddenly not want to talk about college football tomorrow which is a change from last week.

Texas A&M leads 38-10, has 281 rushing yards and this will conclude my tweeting for this game. UCLA is just completely overmatched.

UCLA vs. A&M in a nutshell: pic.twitter.com/5muMB8vcnm

I was feeling badly about USC football right up until I watched UCLA today. Les Miles?

You think Josh Rosen will relax after this loss in his hot tub?

I think I've figured out Jim Mora's strategy: 1. Get Rosen Killed, 2. Tank the season, 3. Take Darnold with the No. 1 pick in the draft.

Any UCLA fan who stays for the entire game at the Rose Bowl will receive a T-shirt, "Loyal UCLA fan." Many sizes available.

Hmmm… which @ILoveBlueBell goes better with watching the 2nd half of @AggieFootball beating UCLA? pic.twitter.com/9wqQtsYuzm

UCLA should fly Mora somewhere tonight and fire him on a tarmac in a city other than L.A. just to one-up its rival.

Can you imagine being a #Jets or #Bills fan and looking at Rosen right now? It's one game, but yikes.

I can't take any Mora of this crap. #UCLA

Can't decide if I'm more impressed with how good A&M is or how bad UCLA is.

If Josh Rosen just chucked up the deuces on college football right now, would there be any backlash? I doubt it.

Maybe Josh Rosen should worry about that degree after all. ?#ucla

Someone send me a Crying Jordan ucla meme , please

I've had about as much of the #UCLA beatdown I can take. Won't learn anything new about Rosen in this blowout.

Since being on the cover of Sports Illustrated & being called "face of college football," UCLA has won 3 games with Josh Rosen as their QB.

What number did Icky Woods have at the deli?

That's how many Texas A&M has scored on UCLA

[it's only the 3rd quarter] pic.twitter.com/2iJv1n28PJ

UCLA looks like a bunch of California boys getting dominated by #TAMU MEN.