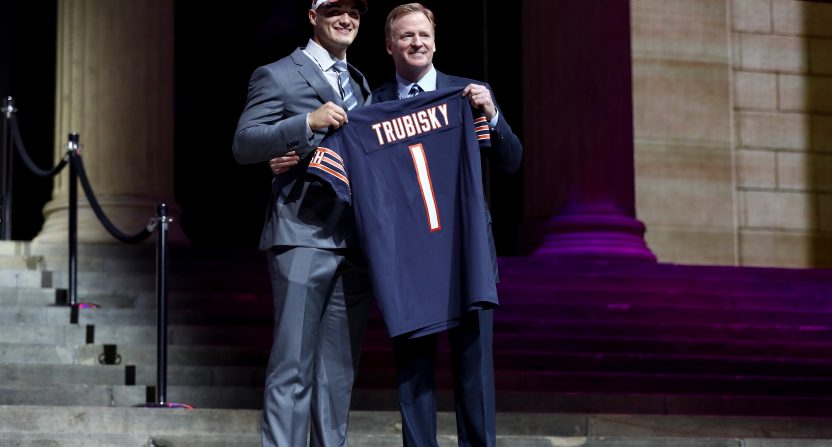 The 2017 NFL Draft is in the books. It will be a few years before we can say with any surety that certain teams drafted a bust and other teams got a sixth-round steal, but there’s one thing we can absolutely say with certainty.

A lot of people, some of whom get paid an exorbitant amount of money to do so, were wrong about the draft.

We begin at the beginning. The Cleveland Browns were on the clock for the No. 1 pick and, being the Cleveland Browns, everyone assumed they were going to do something terrible. The late rumor was that instead of making the logical selection of Texas A&M DE Myles Garrett, they would instead roll the dice with North Carolina QB Mitchell Trubisky. That rumor seemingly turned to fact when ESPN’s Adam Schefter tweeted this.

Those very smart, very well-connected people were also very wrong. The Browns did indeed take Garrett as part of what many are calling it a pretty solid draft outing for Cleveland (except for that one guy). Who knew they could do that?

By the way, an extra womp-womp to both Todd McShay and Mel Kiper, Jr., who had Trubisky going No. 1 overall to the Browns in their final mocks.

As for Trubisky, he was still a pretty hot commodity and there were a lot of expectations that someone might want to trade with the San Francisco 49ers for that No. 2 pick. One person who didn’t see that happening was draft guru Mike Francesa, who also said “nobody is gonna take [Trubisky] before [the fifth pick].” For a more of Francesa’s best 2017 Draft mistakes, check out this amazing compilation by the great @SportsFunhouse.

"Nobody will take [Trubisky] before 5." ❌ pic.twitter.com/OEzjKhBdCY

One thing we knew for sure was that the Chicago Bears would not trade up with the Niners because Adam Schefter, previous report aside, knows what he’s talking about.

Here we go: Bears are considering trading back from No. 3, per sources.

Whoops. The Bears then made a very questionable trade to move up from No. 3 to No. 2 with all signs pointing to Chicago drafting their QB. Well, not ALL signs…

Sorry Glaze, the Bears did indeed take Trubisky, followed by the 49ers taking Stanford DE Solomon Thomas. Pretty soon we found ourselves at the No. 8 selection, held by the Carolina Panthers. There had been a lot of talk about Carolina taking Stanford RB Christian McCaffrey but Rotoworld Football wasn’t gonna fall for that nonsense.

Do two smokescreens cancel out the smokescreen like a double negative? Regardless, the Panthers did indeed take McCaffrey.

Soon after that we found ourselves about to leave the Top Ten. Before we did, however, Mike Francesa was pretty sure that there was one player in particular who was going to hear his name called.

"Dalvin Cook will NEVER make it out of the top-10."

Wait until Mike finds out Cook didn’t even get drafted in the first round, let alone the top ten. Unfortunate for Cook but fortunate for the Philadelphia Eagles, according to Luther Campbell.

The Eagles would let Cook fly on by and he was eventually taken with the 41st pick in the 2nd round by the Minnesota Vikings.

The actual 10th pick overall was the Kansas City Chiefs and if KC Star columnist Sam Mellinger was sure of anything, it was that the Chiefs would not be drafting a quarterback.

Oh, man. I just realized there is basically no chance the Chiefs take a quarterback tonight. Sorry about the last few months.

That No. 10 overall pick? Texas Tech QB Patrick Mahomes. To his credit, Mellinger is a fan of the selection.

Another guy who went in the first round was Michigan safety Jabril Peppers, much to the chagrin of one Eagles fan.

With the No. 29 pick overall, the Cleveland Browns got themselves a new tight end in Miami’s David Njoku. The move caught the attention of then-current Browns tight end Gary Barnidge, who welcomed his new protege with open arms.

Welcome to the TE room @David_Njoku80 looking forward to getting started.

Turns out, however, that Njoku wasn’t drafted to learn from Barnidge, he was drafted to replace him. Barnidge was cut the next day. Ouch.

I want to thank the Cleveland Browns for giving me my opportunity and looking forward to seeing the change. Time for the next step.

As for Pittsburgh Steelers fan Zack, a.k.a. Steel Penice (we see what you did there), it was nice to have met you and we’ll see you on the other side. 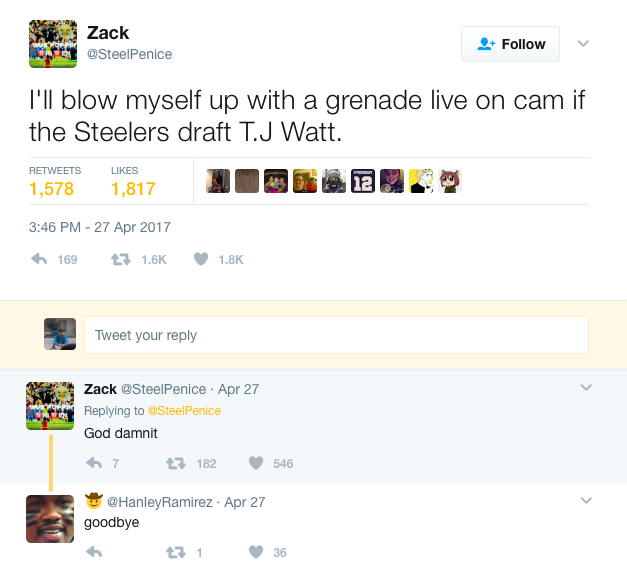 At this point, we were only a few picks away from the Reuben Foster Zone, according to The NFL Show’s Michael Lombardi.

FYI, the Alabama LB was selected No. 31 by the 49ers. That left the door open for Pitt QB Nathan Peterman who, according to Marc Lillibridge, Director of Recruiting at Elite Football Academy, was due.

Who knows, Marc still may be right about the second part for all we know. As for the first part…Peterman went in the fifth round to the Buffalo Bills.

Todd McShay seemed to think that Tennessee’s Josh Dobbs might be a mover and shaker when he said the quarterback could very well sneak into the first round.

Dobbs ended up sneaking back to the fourth round instead.

By the time the seventh round came around, we assumed all of the spicy takes were gone. But leave it to Jacksonville Jaguars draftee Jalen Myrick to remind us that your old takes follow you no matter where you go.

As we wrap things up, we’d be remiss if we didn’t ask Pete Prisco the same question he asked us early last week…

Finally, if you really want to get a sense of who might know what they’re talking about and who is just mocking out of their butts, check out The Huddle Report, which scored all of the major mock drafters for first-round accuracy. Nice job, Joe Marino, Jason McIntyre, Enoch Autry, and Brendan Donahue. Michael Campbell of NFL Mock…not so much.