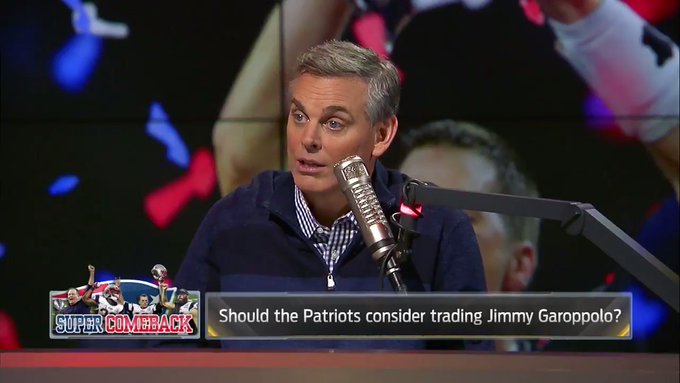 The basic rule of thumb among football fans is everybody loves the backup quarterback. Nobody seems to love New England’s backup quarterback, Jimmy Garoppolo, quite as much as FOX Sports 1 personality Colin Cowherd. No stranger to being all over the place with his quarterback opinions, Cowherd appears to be all-in on Garoppolo, the Patriots’ former second-round draft pick out of Eastern Illinois (the same FCS school that gave the NFL Tony Romo). However, the Patriots next step with Garoppolo is tricky, and Cowherd’s thoughts on the matter have been all over the place.

Lets start in September, as Jimmy Garoppolo was having success as the Patriots starter (with Tom Brady suspended), Colin decided that when Dak Prescott fails in Dallas, the Cowboys would make the most sense for Tom Brady finishing out his playing career…

Colin Cowherd: Once Dak fails, #DallasCowboys are perfect team for Tom Brady to finish his career with https://t.co/KmxLkaGnh3

Prescott went on to be named the NFL Offensive Rookie of the Year, much to the delight of Cowherd’s FS1 co-hort Skip Bayless. As Dak began to prove himself, Colin moved on from Dallas. But even after Brady took over the Patriots QB spot after his suspension, Colin began a more aggressive push for the Pats to move on from Brady…

The Patriots should dump Tom Brady before before it turns into an ugly breakup.
— @ColinCowherd. https://t.co/SURC1SDJAf pic.twitter.com/gbvYD5EE7Y

Considering Brady has restructured his contract in order to help the team pay other players, and considering all that has been accomplished in New England, forecasting a Joe Montana-Steve Young situation with the Patriots was a bold position to cling to.  Especially when the other option is Garoppolo, a guy who has started two games in three seasons.

Colin continued to be all about Garoppolo for 2017, however something must have changed in December, as he started touting the that Patriots should trade Garoppolo in the offseason…

Bill Belichick should trade Jimmy Garoppolo in the offseason pic.twitter.com/Q2zrCvBSKz

Bill Belichick could rebuild his entire defense if the Pats are able find a Garoppolo suitor.
— @ColinCowherd. https://t.co/mD69eHRJSv pic.twitter.com/q9z9Z0G7Nx

So what is it, Cowherd? Trade Jimmy or keep him?

Five players AND two first-round draft picks for Garoppolo? This isn’t exactly Herschel Walker we are talking about, is it? And a trade like that comes back to crush you. Just ask Mike Ditka.

Oddly enough, two days later, after suggesting the Chiefs throw the kitchen sink at the Patriots for Garoppolo, Tom Brady’s performance against the Texans in the Patriots AFC Divisional Playoff Round win, one that Colin categorized as Brady’s “third straight clunker,” convinced Cowherd that if Brady played poorly against the Steelers in the upcoming AFC Championship Game, his career as a starting quarterback for New England would be over, and the Jimmy Garoppolo era in New England would commence. This is all despite Cowherd championing the Patriots to trade Garoppolo throughout the previous month…

If you think Bill Belichick wouldn’t move on from Tom Brady you haven’t been paying attention, but @ColinCowherd has pic.twitter.com/TqkXAlaAGW

There will come a time when Brady will start to fall off, but a few bad games would put be the nail in the coffin of the wildly successful Brady eras in New England? That seemed like a reach. This isn’t a journeyman wide receiver struggling to keep his hands on the football with a young receiver ready to step up into a starting role. This is a battle-tested four-time MVP and lock hall of fame starting quarterback that has won five Super Bowl championships. One would think it takes more than a few bad games to make that change.

Colin’s “if Brady stinks” theory became moot after the Patriots destroyed the Steelers 36-17 to book a trip to the Super Bowl.  Brady did not stink, as he threw for 384 yards and 3 touchdowns.  Here’s Colin during the game…

As for now, I would keep Brady. I'll report back later.

The next day, Colin softened his stance from the previous week.  He essentially inferred that the Patriots should move forward with Brady, but they should keep Garoppolo  because age will catch up with Brady fast.  However, he went on to say that if a team is willing to offer the Patriots a substantial amount of draft picks for Garoppolo, New England should pull the trigger.  A week or so later, he suggested the Browns do exactly that…

Trade half your draft picks if you have to. Go get Jimmy Garoppolo, Browns. pic.twitter.com/0rF4Cz9L2H

However, it didn’t take long for Cowherd to have second thoughts about whether the Patriots should even trade Garoppolo at all.  During the Super Bowl, one that saw the Patriots down 28-3 in the third quarter, Colin tweeted…

I would hold off on trading Jimmy Garopolo.

Yea, considering the future at the games most crucial position, as your soon to be 40 year old QB has another playoff clunker is nuts right?

Since the Super Bowl, which, of course, the Patriots miraculously came back to win, Cowherd has been looking to the future of the Patriots and realizes Tom Brady is not going to be around forever, so moving Garoppolo should not be in the cards for New England…

The Patriots would be foolish to trade Jimmy Garoppolo pic.twitter.com/eBlKGiBQEr

Should the Patriots trade Jimmy Garoppolo? @ColinCowherd explains why they should NOT. https://t.co/NXb3wiZZuX

And to further beat that drum, on Monday Colin affirmed that the Patriots should not be enticed by any pick to give up Jimmy, not even the number one overall pick in the draft.

Thus, as of right now, it appears Colin is pretty set on his position as to what the Patriots should do with Jimmy Garoppolo.  Subject to change, of course.