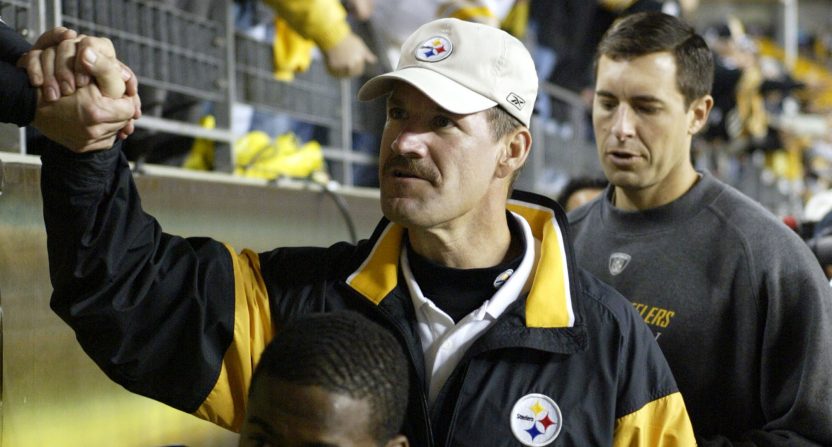 The Pittsburgh Steelers organization and fans are mourning the passing of Dan Rooney, who oversaw the franchise’s glory years and became a key figure in the history of the NFL. After taking over day-to-day operations of the franchise in 1975, the team would rattle off four Super Bowl victories in six years. By the time he handed the reigns to his son in 2003 the team was in position to win a fifth Super Bowl in 2005 under head coach Bill Cowher.

Perhaps that might not have happened if Rooney hadn’t trusted himself and instead listened to Ron Cook of the Pittsburgh Post-Gazette.

Cowher had taken over as head coach in 1992, succeeding legendary coach Chuck Noll. For six seasons, the franchise was among the best in the league, making the playoffs every year, reaching three AFC Championships, and one Super Bowl which they lost. Between 1998 and 1999, however, the team took a step backwards. Successive 7-9 and 6-10 seasons put the long-term viability of Cowher in doubt. Were his best years with the team already behind him?

Shouldn’t this be an easy call for Dan Rooney?

With many franchises, Cook might have been right. But the Steelers have always done things their own way. Even now they’ve only employed three head coaches since 1969. They’re a franchise that values loyalty and dedication, a credit to Dan Rooney and the atmosphere he cultivated.

Cook figured if there was anything that could break the commitment oath that Rooney had made to Cowher, it would be the coach’s contract that didn’t match the results on the field.

For the Steelers, change is a must. True, it’s not Rooney’s way to eat a contract worth $6 million. That thought must keep him up at night.

But there’s little chance firing Cowher would cost the Steelers $6 million. It would cost them $2 million if he sits out next season, but they would owe him the full amount only if he doesn’t coach for the next three years. That isn’t likely. At 42, he’s a long way from retirement.

Any contract Cowher gets with a new team figures to be worth more than $2 million a season and would take Rooney off the hook.

But even if the Steelers would have to swallow $6 million, Rooney has to realize that’s nothing in a business that generates millions and millions in revenue. Certainly, that $6 million isn’t enough to keep a coach who is failing badly.

Cook was right about a one thing. Cowher was indeed still a few years off from retirement. But everything else he was pretty wrong about.

A coach really can stay too long on the same job.

Cowher’s eight-year run here should and will be remembered fondly, but he’s in the ultimate what-have-you-done-for-me-lately? business.

The time has come for a fresh start for Cowher and the Steelers.

You know how it went from here.

Rooney stuck by his coach. The next season the Steelers got back to their winning ways with a 9-7 record. In 2001, Cowher would lead them to a 13-3 record and another AFC Championship Game appearance. In 2004 the team would finish the regular season 15-1 but fall one game short of the Super Bowl. The following year, 2005, Cowher would finally get the Steelers over the hump, winning Super Bowl XL and confirming the faith that Rooney had in all those years earlier.

Cowher would eventually retire after the 2006 season after leading the Steelers to 149 victories, six AFC Championship games, two Super Bowls, and winning one of them.

Ron Cook wasn’t wrong. A coach can indeed stay too long on the same job. But Bill Cowher wasn’t that coach. And Dan Rooney seemed to agree.