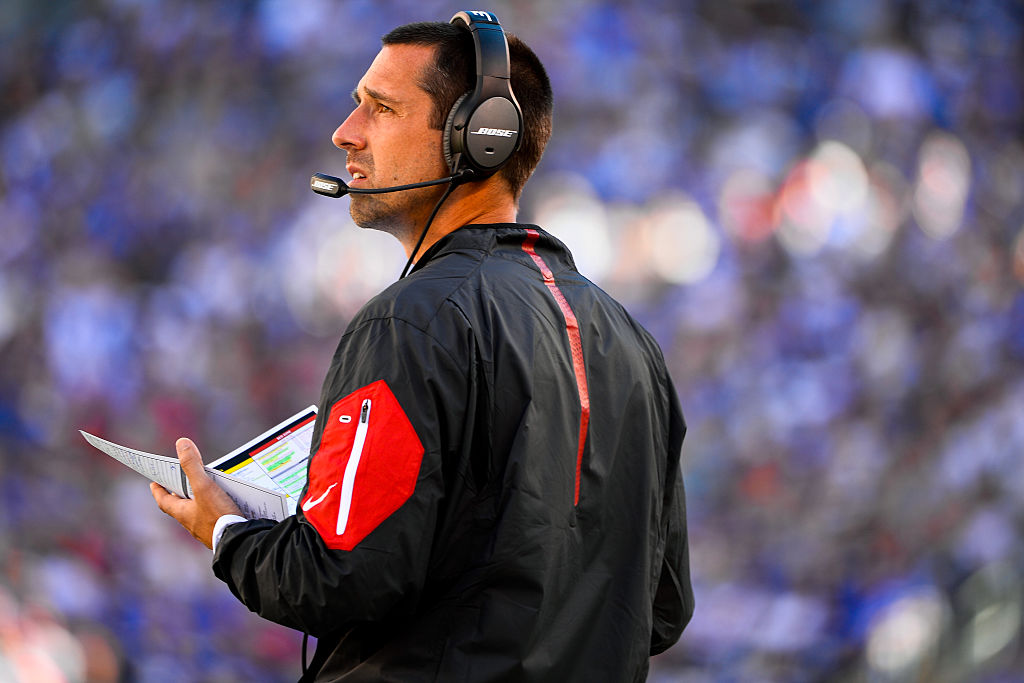 Predicting coaching success can be tough, and this January 2014 Gregg Doyel CBS column titled “Lane Kiffin, Kyle Shanahan: Daddy’s Boys keep falling forward” is a case in point. At the time, Doyel (now a columnist for The Indianapolis Star)’s takes that Kiffin and Shanahan were only getting opportunities thanks to their famous fathers Monte and Mike were fiery (especially considering his wording), but they were opinions shared by many. However, while the jury’s still somewhat out on Kiffin (who found success as Alabama’s offensive coordinator, but had an odd departure just before the title game to take over at Florida Atlantic), Shanahan has proven very successful as the Atlanta Falcons’ OC.

Shanahan led the Falcons to posting the most points per game and the second-most yards per game this season. He also has them in the Super Bowl, and is reportedly set to become the San Francisco 49ers head coach after that game. Looking back at his 2014 column Wednesday, Doyel admitted that Shanahan’s proven him wrong and looks qualified for NFL OC jobs at the least.

“I see the bar I set for Kyle Shanahan was offensive coordinator, not head coach. I think he’s fairly well proved he can handle calling plays. Which means he’s fairly well shot down my story. Going forward I wonder if he can be a head coach. But can he succeed at OC? The verdict is in—yes, with help from all those new pieces (including Alex Mack, Mohamed Sanu and Taylor Gabriel). So maybe I’m torn, but leaning toward…I’m wrong again.”

Here’s the key part of what Doyel wrote back in January 2014, when Shanahan was interviewing for the offensive coordinator job with the Miami Dolphins (shortly after he and his father were both fired from the Washington Redskins).

Lane Kiffin is the mirage that won’t go away, and now he’s vaporized out of thin air to become the new offensive coordinator at Alabama.

It’s offensive, the way this guy gets great job after great job, and the same goes for Kyle Shanahan, the second most notorious Daddy’s Boy in football coaching. (Hey, Lane, you’re No. 1; and that’s not my index finger I’m raising.) On the same day Kiffin was announced as the offensive coordinator at one of the best football schools in America, Kyle Shanahan interviewed for the offensive coordinator position with the Dolphins.

It’s disappointing, disheartening, even disgusting that people like Kiffin and Shanahan continue to find open doors and welcome mats after spectacular failure, when good men — men who didn’t climb onto Daddy’s back for their start in the football business, or any business — sit by the wayside, either unemployed or underemployed because they don’t have a father who was better at their job than they ever will be.

Doyel’s not wrong that their fathers’ backgrounds were probably helpful to Kiffin and Shanahan, that plenty of sons of coaches haven’t panned out, and that some talented people have probably been overlooked because they don’t have a famous name. However, there are also examples of it going the other way, with Nick Saban and Bill Belichick as cases of sons of coaches who wound up doing exceptionally well in their own right.

It’s also worth noting that both Kiffin and Shanahan had previously found some success apart from their fathers. Consider Shanahan’s time in Houston from 2006 to 2009, as OC for the last two years, or Kiffin’s success as a USC assistant (and eventually OC) from 2001-2006. As Sally Jenkins notes in this 2015 Washington Post piece, the “nepotism” charges lobbed at Shanahan probably should have considered his previous success more, and/or factored in all the other issues with the Redskins.

The timeframe here does matter, though, and Doyel’s column feels at least somewhat like a product of its time. The Redskins went just 24-40 under the Shanahans, including a 3-13 season with a disastrous offense in 2013 that led to their firing. Most offensive coordinators who presided over that wouldn’t necessarily get another OC job immediately, so some skepticism about the Dolphins interviewing Shanahan may have been warranted. (He wound up being hired by the Cleveland Browns, and served as OC there for a year before resigning in January 2015 over the front office trying to force him to start Johnny Manziel. Shortly after that, he was hired as OC by new Falcons’ head coach Dan Quinn).

It’s worth noting that there were plenty of others making nepotism arguments against Kyle Shanahan around this time, too. Here are a few examples:

Remember, at least 50% of Kyle Shanahan's qualifications are nepotism.

Jim Mora Jr. is in that Fall Up Nepotism Club with Lane Kiffin, Kyle Shanahan. Unbelievable.

Another critic of Shanahan in Washington who then drastically changed his tune was Doyel’s then-CBS colleague Jason LaCanfora, as Ryan Glasspiegel pointed out in this 2015 piece at The Big Lead. La Canfora called Shanahan “someone who was empowered and enabled by his father, spending an abundance of time in his father’s office, given a wide swath of power, and rubbing many people — players, fellow coaches and members of football operations — the wrong way” in 2013, but “the lone bright spot on offense” and “such a talented coach” when the Browns let him exit in 2015. La Canfora responded to that TBL piece by saying Shanahan’s performance changed, and other NFL coaches noticed:

kyle shanahan’s game-day coaching caught attention of entire NFL. 8 openings – at least 6 wanted him. You don’t let him walk…teams stalled their searches to wait for him. Flamed out in DC, still can be very difficult, but few did more w/less in 2015. he got several HC interviews as well, a year after having to take bad OC job in CLE w/o a QB. His status changed -thats the pt. it’s not “my portrayal,” it’s his reality, going from taking OC job under 1st time HC to interviewing for HC jobs. But whateves.

That illustrates one way it’s possible for old takes to go wrong; sometimes criticisms are fair at the time given the pervious, but look bad in retrospect given how the subject changes. (The takes on Bill Belichick leaving the Jets for the Patriots are a great example of this, as “Patriots will regret hiring Belichick” author Ian O’Connor has admitted.) However, there’s also perhaps a case that these criticisms were too fiery even at the time, especially considering what Shanahan had done in Houston apart from his father (and that he did have one impressive season with the Redskins in 2012 before Robert Griffin III got hurt). Either way, this column is certainly now a take that didn’t work out in the end. Doyel admits that, and says it’s part of the name of the game.

“I’m not always going to be right,” he said. “No opinion writer who comes out and SAYS something will nail every opinion. That’s a bar I’m never going to reach.”