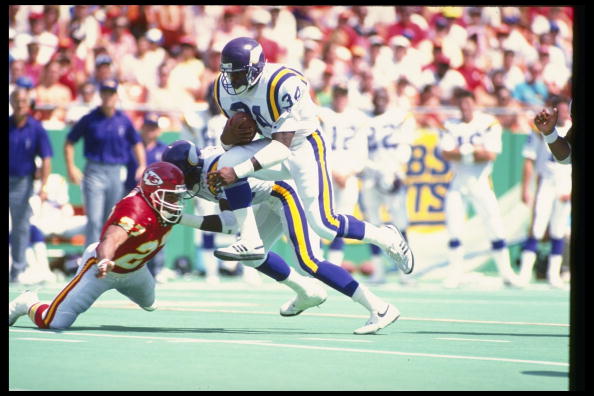 It’s not really up for debate: The Herschel Walker Trade is the most lopsided deal in NFL history. Often called “The Trade That Made the Cowboys Dynasty,” the six-player, 12-draft pick swap between the Dallas Cowboys and Minnesota Vikings changed the entire course of the NFL in the 1990s and serves as a warning to franchises who want to mortgage their future for the here and now.

As the story goes, Cowboys’ head coach Jimmy Johnson became convinced that the team needed to make a blockbuster trade in order to improve in a hurry. After considering trading Michael Irvin, he settled on Herschel Walker, the star RB who had amassed 1,514 yards in 1988. On Oct. 12, 1989, the Cowboys dealt Walker and four draft picks to the Vikings for five players, six conditional draft picks, and a 1992 first-rounder. Dallas would quickly part ways with the acquired players (except for Issiac Holt) and instead, put their focus on maximizing those draft picks. The Cowboys used some of those picks to take players such as Emmitt Smith and Darren Woodson while dealing others to acquire players such as Russell Maryland. When the dust settled, the players gained that day would become cornerstones in the Super Bowl-winning squads in the years to come.

Meanwhile, Walker would only play two-and-a-half seasons in Minnesota, never putting together the kind of stats that were expected. Between that and the draft picks the franchise gave up, some argue that the Vikings set themselves back almost a decade just based on this one deal.

Of course, we have the power of hindsight to know all of this but, at the time, there were plenty of folks who thought it was the Vikings, not the Cowboys, who had just pulled off the heist of the century.

Some sportswriters in the Dallas media seemed to feel that way. Frank Luksa of the Dallas Times Herald wrote that the Cowboys gave up their star for “a bag of beans and a cow to be named later.”

However, no one seemed to feel stronger than Dallas Morning News columnist Randy Galloway. In an October 14, 1989 column titled, “Take wool from Cowboys’ eyes, Vikings flat out fleeced them,” Galloway laid out the reasons why the Cowboys had just fallen victim to one of the classic blunders (other than getting involved in a land war in Asia). 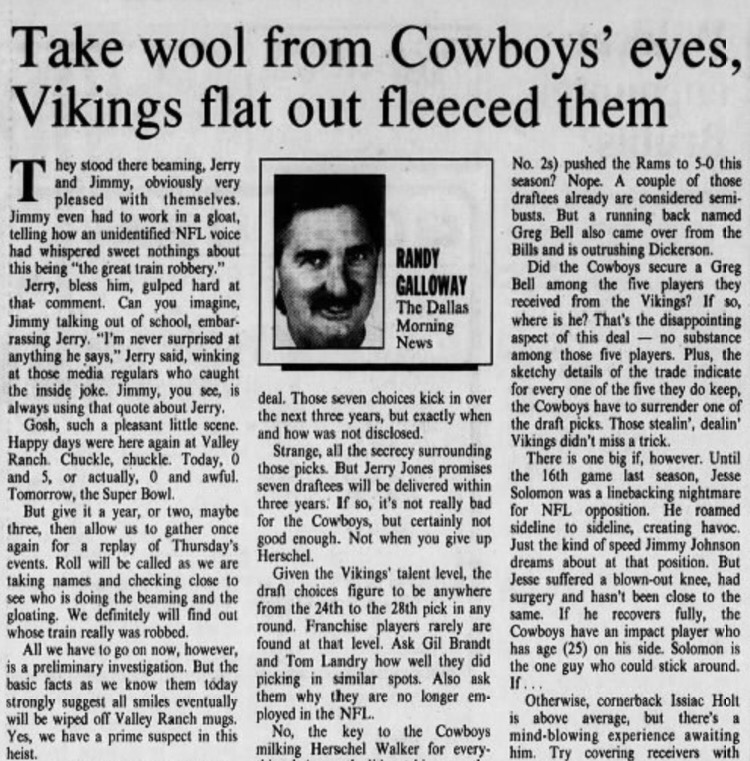 “They stood there beaming, Jerry and Jimmy, obviously very pleased with themselves. Jimmy even had to work in a gloat, telling how an unidentified NFL voice had whispered sweet nothings about this being “the great train robbery.”

…but give it a year or two. maybe three, then allow us to gather once again for a replay of Thursday’s events. Roll will be called as we are taking names and checking close to see who is doing the beaming and the gloating. We definitely will find out whose train really was robbed.”

Three years following the trade, the Minnesota Vikings lost in the first round of the playoffs and the Dallas Cowboys won the Super Bowl, so, yeah, we found out.

“The Vikings got Herschel Walker. The Cowboys got nothing more than a huge handful of Minnesota smoke. And who knows if there’ll ever be any fire.”

“Love that steal for Minnesota. See you in the end zone, Hershel. See you later, Dallas. Much later.”

“And now that Herschel is gone, where do the Cowboys go from here? Nowhere — not now, not ever, unless they draft extremely well and extremely lucky. Hello, crapshoot.”

“Check with the Los Angeles Rams on that package they received for Eric Dickerson several years ago. Have the six draft choices (three No. 1s, three No. 2s) pushed the Rams to 5-0 this season? Nope. A couple of those draftees already are considered semi-busts. But a running back named Greg Bell also came over from the Bills and is outrushing Dickerson.

Did the Cowboys secure a Greg Bell among the five players they received from the Vikings? If so, where is he? That’s the disappointing aspect of the deal — no substance among the five players. Plus, the sketchy details of the trade indicate for every one of the five they do keep, the Cowboys have to surrender one of the draft picks. Those stealin’, dealin’, Vikings didn’t miss a trick.”

First, let’s acknowledge the weirdness that the Rams left and returned to LA in the space in between when this article was written and now.

Second, Galloway’s completely backward understanding of what Jerry and Jimmy were doing with the players they took in the trade reminds me of the famous line in “Rounders.” “Here’s the thing. If you can’t spot the sucker in your first half-hour at the table, then you ARE the sucker.”

“For Walker, the Vikings gave up personnel they could afford to lose. It’s a textbook example of how the strong fleece the weak in a blockbuster trade. All they had to do was find somebody dumb enough to fall for it.”

To be fair, Galloway was 100 percent correct. This was a “textbook example of how the strong fleece the weak.” He was just 100 percent wrong about which was which.