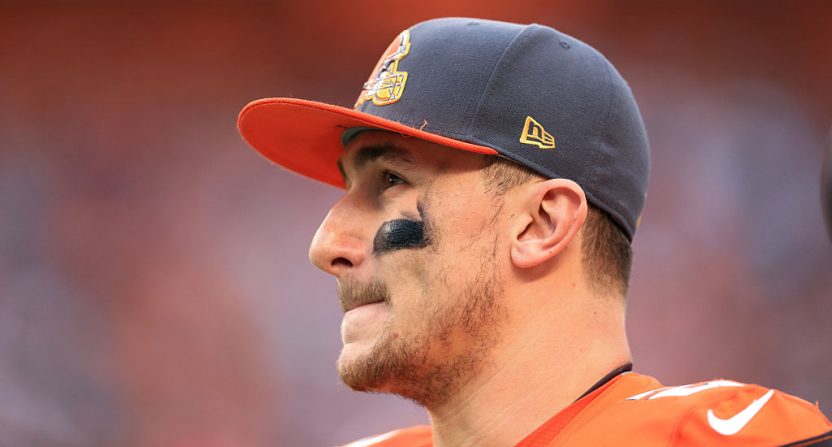 Heading into the 2014 NFL draft, there was a lot of intrigue about quarterback Johnny Manziel. Manziel won the 2012 Heisman Trophy as a redshirt freshman and threw for even more yards in his sophomore year of 2013, but some raised concerns about his 5’11” height, his focus on scrambling, his background in a spread-style offense, his personality and maturity, and more. A lot of NFL media and scouts made very favorable comparisons for Manziel, though, and they made them to a whole lot of different quarterbacks with remarkably distinct styles, many of which had very little in common with Manziel. Here are some of the most interesting comparables for Manziel. Let’s start off with a famous 49ers duo:

The Young one is a bit understandable, as his scrambling and rushing ability had some in common with Manziel, but Montana, really? That feels like a reach. It’s far from the biggest reach, though. Here are some of the others:

Brett Favre thinks Johnny Manziel reminds him of himself http://t.co/7MDLKkwwlh

Manziel wouldn’t seem to have a lot in common with either Favre or Kelly, both of who were much more prototypical pro-style NFL quarterbacks than he was. (And both were much taller, at 6’2” and 6’3” respectively.) Someone who was a little more of a fit was Dallas Cowboys’ quarterback Tony Romo, also known for his scrambling skills, but the 6’2” Romo also played in more of a pro-style system in college. That didn’t stop the comparisons, though:

Today's Ross Tucker Football Podcast on why Manziel reminds me of Romo & Nnamdi fell so far so fast: http://t.co/EbwJypDxeL

Beyond that, Manziel was compared to a guy who made a successful CFL to NFL transition:

He was then compared to another guy who had a solid CFL to NFL transition, and then to a Vikings’ legend:

The Flutie and Tarkenton comparisons actually might be the closest, as both were short (listed at 5’10” and 6’0”) and known for their out-of-pocket scrambling skills. Flutie’s also another Heisman Trophy winner. But we can’t finish this without the most unusual comparison of them all, Washington Post columnist Thomas Boswell comparing Manziel to Johnny…Depp?

Some highlights from that, which is actually an answer Boswell gave in a pre-draft chat on the Post‘s site:

For some reason Johnny Manziel reminds me — in attitude, not facial appearance — of Johnny Depp when he plays snarky/arrogant. Manziel looks like he weighs about as much as Depp, too.
No, I’m not a Johnny Football fan. Don’t root for him to fail. But I think he’ll be more Flutie than Tarkenton. Vick is physically very tough — at the NFL level. You can’t know about a college QB’s ability to cope with NFL-level violence until he faces it — especially one built like Manziel. Maybe Manziel can do it. I wouldn’t draft Manziel unless he dropped a lot further than he will. I like athletic arrogance. It looks like maybe he just has all-around arrogance. That doesn’t usually play as an NFL QB unless you are incredibly talented. But he was considered an inspirational leader in college by teammates. So we’ll see. Put me down for “No.” But I’m wrong a lot.

Once Manziel’s career began, the comparisons started to turn downward:

Johnny Manziel reminds me of your average frat guy…. So someone really annoying.

Manziel reminds me of a childhood actor at this point. Too much too soon. https://t.co/ZM0LjYS23N

"Off the field he reminds me of that affluenza kid." – Brian Billick on Johnny Manziel #WhitlocksHouseParty https://t.co/MghP6WQYGr

You know, Boswell actually wound up being one of the closest to right here. Manziel was drafted 22nd overall by Cleveland, but didn’t find a lot of success as a starter, and created plenty of controversies with his behavior, from appearances at casinos while he was out with a concussion to public fights with his girlfriend and allegations of domestic violence to allegations of extensive drug usage. The Browns eventually released him in March 2016, and he hasn’t landed anywhere else yet. So maybe the comparison to Depp (who’s had plenty of legal problems and domestic violence allegations of his own) was apt. It’s certainly worked out better than any of the comparisons to quarterbacks.

Hopefully, Manziel can get it together and make a comeback.