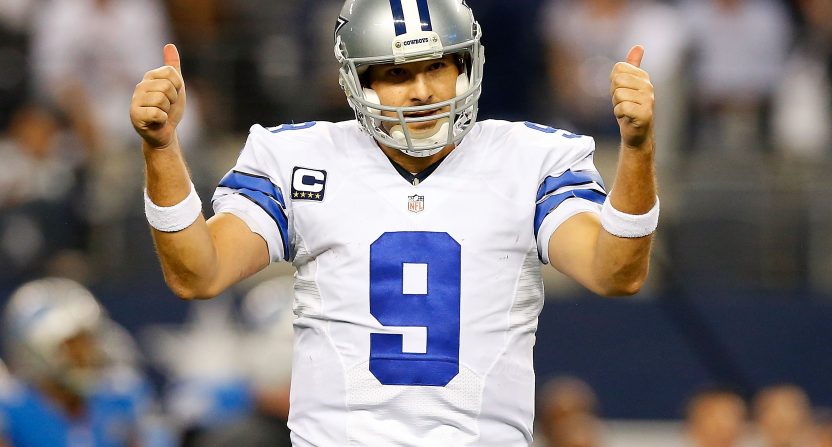 As many are looking back on the career of the newly retired (for now) Tony Romo, now seems like a better time than ever to reminisce about a 2004 column about the then young backup Cowboys quarterback.

Some background: In 2003 and for most of 2004, Tony Romo was the Cowboys’ third string quarterback.  Throughout most of the 2004 season, Drew Henson was the the number two QB on the Cowboys’ depth chart below veteran starter Vinny Testeverde.  Romo was behind Henson.

By mid-December 2004, the Cowboys were in the back end of a disappointing season where they were already eliminated from playoff contention with three games left.  During the week of December 13, leading up to Dallas’ upcoming game against Philadelphia, head coach Bill Parcells threw everyone for a bit of a loop when, during practices, he had Romo take second string snaps instead of Henson. When asked about this change later in the week, Parcells apparently was in no mood to discuss and expressed frustration and annoyance that the topic was even brought up.

Well, Fort Worth Star-Telegram columnist Gil Lebreton took offense to Parcells taking offense and lit up Parcells in a column the following day. Lebreton not only criticized Parcells for his lack of desire to address the issue but also for giving Romo, the lowly third string QB, snaps in practice with the second team.

From the column, titled “It’s about Henson, not Romo:”

“* Note to Bill: Any notion of playing Tony Romo ahead of Drew Henson is a waste of time.

Tony Romo can carry a clipboard. Can he carry the Cowboys?

The answer here is a resounding yawn.

And if coach Bill Parcells wants to roll his eyes and chide the media for making too much of a few practice snaps, let me suggest that he started it.

He made the change to Romo as the apparent backup quarterback-in-waiting for Sunday’s game in Philadelphia. And his timing couldn’t have been worse.”

Later in the piece, he goes on to compare Romo and Henson:

“We’ll take Parcells’ word that Drew Henson is not yet ready to become a starting NFL quarterback. We’ll also agree with Bill’s assessment that one of Henson’s biggest problems is that he hasn’t taken enough snaps.

A spring apprenticeship in NFL Europe is not a wise option. No. 1, it would expose your potential 2005 starting quarterback to injury. No. 2, what Henson needs are snaps executed at NFL speed — a velocity that NFL Europe can’t replicate.

On the Romo thing, therefore, Parcells’ timing couldn’t have been worse.

If there are any snaps to be spared — in games or practices — between now and the Cowboys’ 2005 training camp, they need to go to Henson.

If Henson had remained at Michigan for the 2001 football season instead of signing a baseball contract with the New York Yankees, he could well have won the Heisman Trophy and been the first quarterback chosen in the 2002 NFL Draft.

“Romo isn’t going anywhere. He is a No. 3 quarterback, at best, on any depth chart in the league. The clock, on the other hand, is ticking on Henson, who hasn’t played a lot of football in the past five seasons.”

After the 2004 season, the Cowboys ended up sending Henson to NFL Europe for the “spring apprenticeship” Lebreton described, but Romo ended up beating Henson out for the backup job in 2005.  Henson was later released by Dallas after the 2005 season.  In week 7 of the 2006 season, Romo replaced a struggling Drew Bledsoe as the Cowboys’ first team starting quarterback and never looked back, as he maintained (when healthy) the starting role for the next nine seasons.

Safe to say the “resounding yawn” about Romo subsided a while ago.