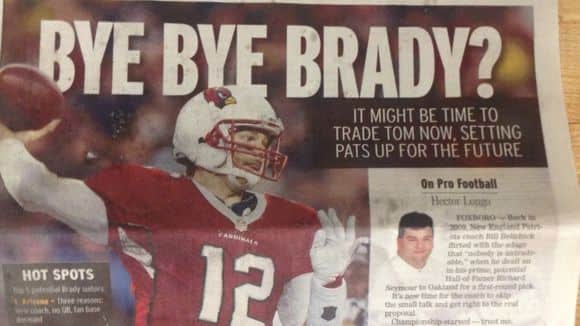 Tom Brady’s currently preparing to lead the New England Patriots into yet another Super Bowl, but four years ago, one writer from the local The Eagle-Tribune (which is based in Essex County, Massachusetts) thought the team should move on from him. Here’s the first key part of what Hector Longo wrote Jan. 27, 2013, in a piece headlined “Bye, bye Brady“:

Are Tom Brady’s best days behind him?

My opinion? Yes. He’s still elite, top three or four. But he’s not the best of the best any more. We’ve seen too much in big games the last handful of years.

Can Belichick make enough moves to supply Brady with enough quality parts around him to capture the ultimate prize?

My opinion? No. While I believe they can compete at the highest level, particularly in the weak AFC, there are too many key holes to fill (more on that later).

So, without any further beating around the bush, it’s time for Patriots football CEO and head coach to consider what several million people probable deem unthinkable: Should the Patriots trade Brady?

Longo admits that people are going to criticize him for this take, but then goes on to say the Patriots should do this because Brady hasn’t recently won playoff games, is getting older (he was 35 at the time), and is on the downslope of his career. In fairness to him, he does argue that the Patriots should ask for a team’s entire draft in return, so this isn’t giving Brady away for nothing, but the really good part is when Longo talks about how New England could replace him:

Replacing Brady would be a chore. But it can happen. Better yet, you don’t have to replace him, just find a quarterback 75 percent as good as Brady, who can run an offense.

Look at the Colts with Andrew Luck, the Niners with Colin Kaepernick, Seattle with Russell Wilson and Washington with RGIII.

Find your guy in the draft. Give Ryan Mallett the reins if he is ready. Or seek a replacement elsewhere.

Remember that guy Matt Cassell (sic)? He led you to an 11-5 mark in 2008 when Brady was on the shelf. Chances are he could be had for a song in Kansas City, where he probably doesn’t fit into new coach Andy Reid’s system.

Shortly after the Super Bowl, Alex Smith will be seeking a new home. He was a couple botched punt returns away from leading the Niners to Super Bowl XLVI.

New faces are out there, and the Patriots would at that point be in superior bargaining shape.

Yeah, many of those picks don’t look so good right now; Wilson, Luck and Smith have all done well, but not Brady-level well, and Mallett and Cassel, not so much. Meanwhile, Brady threw for over 4,000 yards in 2013, 2014 and 2015, and notched 3,554 this year despite a four-game suspension, and he’s led the Patriots to four straight conference championship games, two Super Bowl appearances, at least one Super Bowl victory (he could get a second this year), and picked up four Pro Bowl nods, led the league in passing touchdowns in 2015, and won the Super Bowl MVP award that season as well. Even at the time, though, this looked like a pretty hot take from Longo, and it led to plenty of internet mockery of him. He then responded by doubling down in another piece four days later, one that mocked his critics. Here’s the first part of that piece, from February 1, 2013, titled “Trade Brady?”

Wow, Patriots fans are an angry bunch aren’t they?

America has obviously remembered how to read, judging by the enormous Web traffic. I just wonder if digesting or comprehending the words is a lost trait.

I’ve read all the responses, yes even the ones that have told me to drop dead, and I have managed seven simple points that I’d like you all to understand.

Sadly for Longo, most of his seven points don’t stand up well either. Let’s go through them:

1. I love Brady. He’s clearly the greatest QB of all time in my eyes. I’ve been at Foxboro for nearly every home snap the kid has taken — exhibition, regular season or playoffs — and taken in many on the road. There’s none better. Not Montana, Manning, nobody. Michael Katz of USA Today did all the block-copy work from Wikipedia on Brady when he mocked my column. He, and a lot of you people, are missing two key points. He’s 7-7 in his last 14 playoff games. And he is 35 years old. I say to move him, but only for a top package. What if you got Josh Freeman and Tampa’s entire draft? What if you got Patrick Peterson and Arizona’s whole draft, then turned around and dealt a No. 4 pick to the Niners for Alex Smith?

You make your football team better. And that’s all that matters to me.

Yeah, the Patriots are probably not better with either Josh Freeman (currently out of football) or Smith.

2. How funny is it that Peyton Manning, the guy all you Pats sycophants loathe and point to as a playoff loser, has the same postseason record as Tom Brady over his last 14 games since 2004? And he’s got a title in that stretch that Brady doesn’t. The Colts had no problems parting with their 7-7 playoff QB and went from 3-13 to playoff contenders.

That’s true, but Denver picked up Manning and went to two Super Bowls, winning one.

3. The division is yours as long as Bill Belichick hangs around. Look at the wretched state of the AFC East. Say Brady retired tomorrow. The Pats are still the clear-cut choice to win it. So stop worrying. Miami, Buffalo and the Jets are stagnant at best. I’d choose to call all three dead in the water and listing badly.

Okay, that’s still pretty true (even with some recent improvement from Miami).

4. As a lifelong, 47-yearold New Englander, I lived through Red Auerbach’s refusal to move Kevin McHale, Robert Parish and Larry Bird until the “Big Three” disintegrated before our eyes. Remember Larry Legend laying on the parquet as his back spasmed? It set the Celtics’ franchise back a decade, just to be sure that LB and Kevin retired as true Celtics.

That’s fair enough, and being wary of the impact of age can be valuable, but not all players have age hit them the same way, and Brady certainly wasn’t limping around in 2013. And he still isn’t.

5. Honestly, what has Brady done in the postseason lately? Who has he beaten in the playoffs after 2004? No, I do not blame Brady for the Pats’ losing in the playoffs over the last eight years.

His lack of performance has contributed to the losses, but no more than a Jerod Mayo or Wes Welker or Vince Wilfork. Nor do I lavish praise on him when he throws a fistful of TDs in a first-round blowout of Denver then is overwhelmed a week later. He’s become decent in the playoffs, not great, and the team around has followed suit.

This may have been true at the time (although there’s an argument that Brady played better in those losses than Longo gives him credit for here, and that playoff record’s a lousy way to judge quarterbacks anyway), but it’s certainly not true now.

6. Russell Wilson, RGIII, Cam Newton, and Colin Kaepernick … They are the future of football. All can run and pass. Brady’s last big run came well before Bernard Pollard’s 2008 helmet-to-the-knee.

Two of those quarterbacks have done well. Two have not. Brady has been probably more consistently effective over the four-year stretch since this column than any of them.

Well, sure. But it’s a good thing Belichick didn’t trade Brady, as that led to him getting another Super Bowl win, and potentially a second this year. It also led to these columns from Longo aging very poorly. Funnily enough, even a later column of his shows that; consider this “Protect Tom, win a title” piece from August 31, 2014.

…Even in September it was clear the 2013 Pats weren’t ready to hang and beat the best when it counted. The blowout in the AFC title game was reinforced by the blowout of the Broncos in the Super Bowl. Two wins away might as well have been 2000 wins away in 2013.

Defensive upgrades, improved receivers … the Patriots are again back with the big boys.

Brady again has the pieces around him. A defense littered with top picks and anchored by the best cover corner on the planet, Darrelle Revis, has his back.

And most importantly, Brady, at 37, still has the game and the drive to be the best.

Well, hey, that piece proved to be pretty accurate, as the Patriots would go on to win the Super Bowl that year. It also wound up being a little more accurate than Longo’s 2013 takes on the Patriots and Brady.