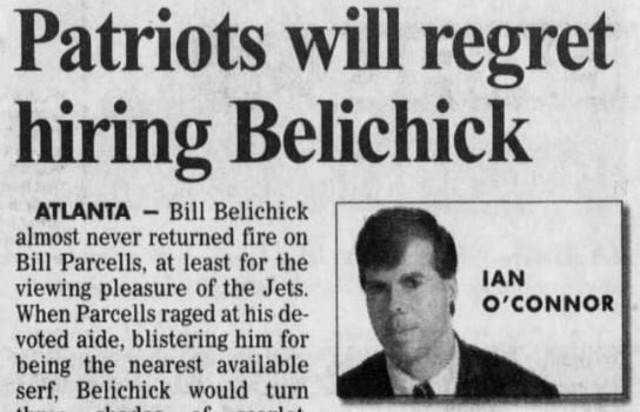 Before he became the New England Patriots’ head coach in 2000, there were plenty of questions about Bill Belichick. He’d been a successful assistant with the Giants (1979-90), the Patriots (1996), and the Jets (1997-99), but some of his greatest successes came as the defensive coordinator for Bill Parcells, and many wondered if Belichick could stand on his own. His overall 36-44 record as a head coach in Cleveland wasn’t inspiring (although the 11-5 mark he put up in 1994 showed promise), and his decision to leave the Jets (where Parcells had named him head coach but was going to be the GM) for the Patriots (where he would have control over personnel) after just one day sparked further controversy.

Funnily enough, that marked the second time Belichick had been the Jets’ head coach without coaching a game. He was named head coach in 1997 when they couldn’t get Parcells from the Patriots, but they were able to extricate Parcells a week later, and Belichick stepped back into the defensive coordinator role once Parcells was hired. So, at this point, Belichick had a 36-44 head coaching record, success as a DC but under the defensive-minded Parcells, and had just left a team one day after being named head coach. That led to plenty of takes on how the Jets were lucky to get rid of him and the Patriots were foolish to hire him (especially considering that they were eventually forced to give the Jets a first-round draft pick in exchange).

Of course, Belichick was still the subject of hot takes in 2014 even after a decade of success,  but the takes were especially vicious to him back in 2000 before he’d posted a great record as a head coach. One of the most notable is this Jan 28, 2000 (when Belichick was officially hired by the Patriots) one from Ian O’Connor in the Westchester Journal-News:

Go @Ian_OConnor! This has surpassed Bayless' "Manziel will be bigger than Lebron" tweet as most follower suggested Cold Take in FCT history! pic.twitter.com/UGo3Qyx50i

O’Connor (who now writes for ESPN, and corrected himself in 2014 with this “Belichick’s exit? Jets’ worst day, ever” piece) was far from alone there, though. Consider this take from Adrian Wojnarowski (now the editor-in-chief of Yahoo’s NBA site The Vertical) in The Pittsburgh Post-Gazette on Jan. 8, 2000, shortly after Belichick’s resignation from the Jets on Jan. 4:

That full article’s available here, and features other highlights such as “Belichick’s imploded career” and “he belongs in the darkened caves of film rooms. Again, it wasn’t alone. Here are some of the other highlights from a Newsbank search. Sadly, we don’t have the authors for each, but these are pretty good. To start with, let’s go with a roundup of the New York papers’ takes on Belichick, published in the Sunday Republican (Springfield, MA) on Jan. 30, 2000:

“Belichicken” was one headline splashed across the back page of one of the tabs, the New York Post, the day after Belichick left toothmarks in the Big Apple and said he wanted out.

“Good Riddance” screamed out in Friday’s edition of the same newspaper the day after Belichick officially landed with the Patriots.

In New York now, Belichick no longer is the defensive genius he was only a few weeks ago.

Now he’s a nut case, a weak-minded wimp, a coward. Why, the man’s emotions are hanging by a frayed thread.

That piece had a great last couple of lines that would prove prophetic: “But if there’s one constant in the NFL, it is that things change, and they can change in a hurry, a fact the Jets and their greens and whites should fully understand by now. There’s a last laugh out there somewhere, sometime. Where it will originate remains to be seen.” However, there were other Boston-area papers that weren’t thrilled with the guy they got:

Sorry folks. Bill Belichick does not fit the mold. He is not in that coaching stratosphere. Not in my book, anyway. He’s not worth the tariff the Patriots surrendered to Parcells and the Jets yesterday. He’s not someone for whom I’d hand over that kind of ransom, especially when that ransom is going to one of my chief AFC East rivals.

…Considering the Patriots could have potentially landed the general manager and coaching combination of Tom Donohoe and Dom Capers – for no picks whatsoever – why would you surrender a first-round pick and change for someone who doesn’t bring any more to the table?

Andy Wasynczuk, senior vice president and chief operating officer of the Patriots, has an MBA from Harvard Business School.

Which would prompt anyone who follows the Patriots to think that the Wharton School at Penn might be the best place to go for an MBA. Or the Amos Tuck School at Dartmouth. Or the Colgate-Darden School at the University of Virginia.

Or anywhere that teaches you to draw up a business plan before they hand you a diploma.

Perhaps it’s time to peruse the fine print on those sheepskins, the way Jeffrey Kessler is doing with Bill Belichick’s contract. It’s beginning to look as if those master’s degrees were awarded for Funny Business.

…Why is it that the Patriots always seem to be a step behind, rather than a step ahead?

…The Patriots do know what they’re getting in Belichick – a man who had four losing seasons in his five years as coach of the Browns from 1991-95.

The moments after Belichick took the podium and announced he was resigning his 24-hour position as “HC” of the “NYJ” were the moments New England should’ve realized it had a “BP” that better “GAF.”

As in “big problem” that better “go away fast.” For Belichick’s press conference, called on account of greed, exposed a man you wouldn’t want running your $2 hot dog stand, never mind your $500 million team.

The Patriots will regret the business they conducted Thursday, and not necessarily because they gave the Jets their first-round pick in this year’s draft. College prospects are as predictable as Atlanta’s winters. When Parcells was traded to the Jets, the Patriots received a small circle of draft choices that, in the end, did nothing to prevent Pete Carroll’s demise.

Several other coaches were quite willing to bash Belichick at this point, too, including former Browns’ coach Sam Rutigliano in a The Repository (Canton, OH) article from Jan. 29, 2000:

Sam Rutigliano, who was the Browns’ head coach from 1978 through late in the 1984 season, never saw Belichick as head coaching material.

“You can say all you want about Art Modell,” Rutigliano, who recently announced his retirement after 11 years as head coach at Liberty University, said in a recent interview. “Hiring Belichick was the greatest error that Art ever made … and the biggest error you make is when you live with the error.”

…“If you’ve ever watched Bill Belichick — and you guys went through the pain of watching him for five years — he just doesn’t have the communicative abilities to handle that part of the job,” Rutigliano said. “I think that he’s miscast as a head coach. It’s very obvious he is outstanding as a defensive coordinator. That’s where he belongs.”

And what about Jeff Fisher, then coaching the Tennessee Titans, ahead of the Super Bowl (where his team would lose to the Rams on the “Longest Yard” play)? Here’s what Fisher said, in a piece titled “Coaches debate whether Belichick was worth it” published in The Blade (in Toledo, OH) on Jan. 29, 2000:

Fisher, on the other hand, said he felt a first-round draft pick “is an awful lot to give. We have some No. 1 draft picks on our football team who have contributed to us being where we are.

“Are Steve McNair, Eddie George or Jevon Kearse more important reasons for our success than I am? I’d rather not have to answer that.”

Rams head coach Dick Vermeil was a little more accurate in his assessment in that same piece:

“I believe in my profession and I believe there are people who can make a difference in a leadership role as a head coach,” Vermeil said.  “And I think that is a small price to pay for the right guy.

“I don’t know Bill Belichick that well, but the Patriots obviously think that much of him. If they’re right, it is a tremendous investment. To me, there have been a ton of first-round flops. If you get the right NFL coach, he will change your organization.”

Belichick sure did that, and he left a lot of people looking silly as a result.

2 thoughts on “Many thought the Patriots would regret hiring Belichick”