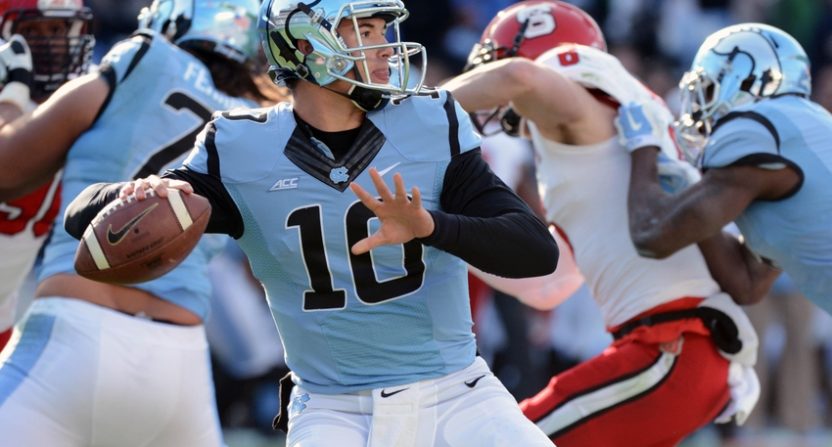 With the NFL Scouting Combine in Indianapolis upon us, the rumors leading up to the NFL Draft in April will begin to fly with frequent flier mileage everywhere you look. There will be no escape from the reports of teams strongly considering drafting a certain player. With the Cleveland Browns on the board with the first overall pick, they are quickly becoming the team once again to be featured in a plethora of “strongly considering” reports, as was the case this week.

North Carolina quarterback Mitch Trubisky appears to be the hot name rising up among the NFL Draft experts, which has led to early reports now the Cleveland Browns are considering taking the Tar Heel with the top pick in the upcoming 2017 NFL Draft. What a report like that doesn’t necessarily reveal is it is expected the Browns are also considering drafting other players with the top pick as well, because of course they are at this stage of the process.

You see, this is the time of the year when every NFL team is strongly considering taking a player that may or may not be available to them in the NFL Draft. And in the next few weeks you are going to be flooded with these types of stories because there is a lot of time to come up with filler content for the draft. We have been down this path before with a number of teams with high draft picks and notable players coming out of college that are either highly-regarded pro prospects or players turning heads more at the combine or in pro day events or in exclusive workouts for teams. Remember stories like these from the NFL?

Tampa Bay drafted Manziel’s teammate at Texas A&M, wide receiver Mike Evans. Manziel ended up dropping to the 22nd pick, and may have only been drafted there because the Cleveland Browns traded up to get him, because they are the Cleveland Browns. The Browns, coincidentally, were reportedly strongly considering Teddy Bridgewater with the 26th pick in the draft.

#Browns enamored with QB Teddy Bridgewater, strongly considering him for No. 26 pick in the #NFLDraft http://t.co/wKrmdKNXII

So the Browns could have had Teddy Bridgewater at a pick six picks ahead of where the former Louisville standout was actually drafted, and instead moved up to draft Manziel. Of all the Cleveland Browns moves we have seen, that may be the Cleveland Browniest.

But apparently, the Bucs like to strongly consider drafting players.

Richardson was actually drafted before Tampa Bay was on the board at No. 5 (the Browns traded up to draft Richardson with the third pick), and the Bucs traded down to draft his Crimson Tide teammate, safety Mark Barron. So maybe the Bucs really were stongly considering drafting Richardson and then had to call an audible on the fly. Here’s another one from 2012…

Of course, maybe the Browns were also strongly considering drafting Richardson. But what about the top of that 2012 NFL Draft?

Colts are reportedly strongly considering RGIII with the No. 1 pick. http://t.co/Vdf63MSl

The Colts ended up drafting Andrew Luck out of Stanford with the top pick in the 2012 NFL Draft as the heir to Peyton Manning. Robert Griffin III went to Washington with the No. 2 pick after the Redskins traded up with St. Louis (who had Sam Bradford at the time).

Hearing that the Cowboys love Wisconsin DE J.J. Watt and are strongly considering drafting him. Looking for leadership, motor, which he has.

J.J. Watt getting past Dallas may have hurt the Cowboys a little more, but things worked out OK with the selection of four-time Pro Bowl offensive tackle Tyron Smith. But could imagine Watt as a Cowboys player. If he’s this big as a Houston Texan, could his starpower be any higher with the Cowboys? Here is one that is a little more recent for your consideration.

The Rams traded up to draft offensive tackle Greg Robinson in hopes of giving the Sam Bradford run in St. Louis one last chance. That, uh, didn’t exactly work out very well. Sticking with that 2014 NFL Draft, here are our old friends from Cleveland creating headlines. One rumor that was floating around for the following year’s draft may take the cake.

Jameis Winston did have some baggage attached to him at the time given off-field conduct and some signs of regressing from his Heisman Trophy and national championship season, but somehow he still managed to No. 1 overall to Tampa Bay. Maybe that’s why teams were considering taking Winston off their draft board instead?

It is not just the NFL where these types of reports and rumors start flying around. It happens in every league, such as the NBA. And you don’t have to dig back very far to find reports about teams strongly considering drafting a player they ended up passing on.

The Knicks ended up taking Kristaps Porzingis with the fourth pick the following month. Willie Cauley-Stein was taken two picks later by Sacramento. Here is one that sort of actually worked out in the end.

The Jazz could have had Smart with the fifth pick if they wanted him. Instead, they took Australian Dante Exum, which left Smart to wait one more pick to go to Boston.

Won't be there at 29. RT @GoodmanESPN: Hearing Oklahoma City is strongly considering Mitch McGary with its second first-round pick (No. 29).

Oklahoma City did have interest in acquiring McGary, and moved up in the draft to grab him with the 21st pick.

The Orlando Magic stayed put on the second pick and took Victor Oladipo.

The Kings took Thomas Robinson out of Kansas, leaving Lillard to go to Portland one pick later.

So what is the lesson here? In truth, there may be nothing wrong with reporting what a team may be strongly considering at any given time. Any team should be strongly considering any number of moves they will have to make, so there is no fault in reporting such a story. Is it an indicator a team will actually follow through on such a plan? Not exactly. It will happen from time to time, but things change over the course of a matter of weeks, so if you see your team is strongly considering drafting one player, it may be best not to go out and order that customized jersey just yet.