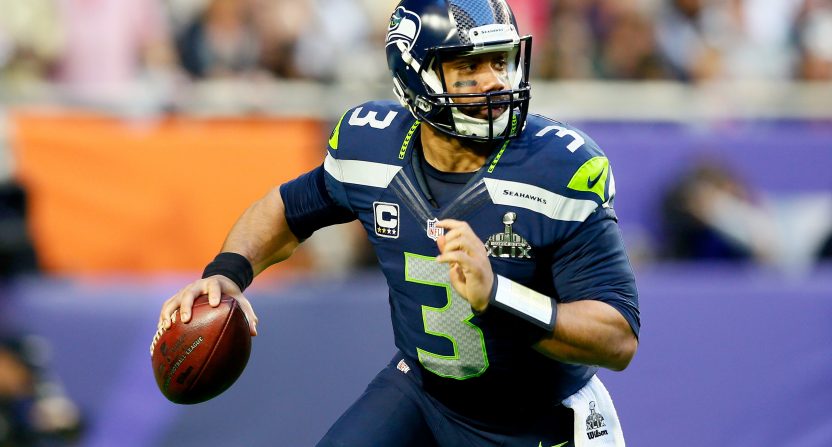 Flash back to the 2012 NFL Draft, when America debated Andrew Luck vs. Robert Griffin III, and Trent Richardson looked like the next Adrian Peterson.

With the 75th pick of that draft, midway through the third round, the Seattle Seahawks selected an undersized quarterback out of Wisconsin named Russell Wilson.

Some people praised the Wilson pick. After all, he had put up gaudy numbers at North Carolina State and Wisconsin, and even then he got rave reviews for his intangibles.

But others, many of them hardcore NFL Draft types, were more skeptical. Wilson stood only 5-foot-11, and quarterbacks that size didn’t often succeed in the NFL. Plus, the Seahawks had just given a big contract to Matt Flynn and had several other QBs (the immortal Tavaris Jackson and Josh Portis) on the roster. At best, Wilson was bound to start his career as a backup. At worst, he’d never be anything more than that.

Um, no. Flynn is starter. RT @JoeDRobinson4: Congratulations to Russell Wilson!!!! chance to compete for starting spot with the Seahawks.

“Can he roll out & do some things with his feet? Yes, but I don’t see him as a starting QB in the NFL.” @15Miller on Russell Wilson to SEA

#Seahawks pick Russell Wilson – Love RW, hate this pick. They signed Matt Flynn and then drafted a QB in R3? Why? Not a good pick. At all.

Russell Wilson will be backing up Matt Flynn…or Tavaris Jackson..HA

As much as I love the rd 1 and 2 picks by the Seahawks, I hate the rd 3 pick. Wilson will never be a worthwhile NFL QB

When wilson is holding a clip board and not even active to play, we'll be really happy we spend a 3rd rd pick on him and not on a player

in case you can't tell, I really don't like the Russell wilson pick. 6-4 is the prototype for a reason

Russell Wilson will be Doug Flutie 2.0 plain and simple. he'll look good, and the fans will love him, but he wont likely do enough to win

The #Seahawks horrible draft continues. Just paid a ton for Matt Flynn; better draft a QB in the third round! #PeteCarrollFailure

CBSSports' Pete Prisco gives the Seahawks a D for their pick of Russell Wilson. Not bc of Wilson, but bc they have 3 QBs already #badgers

Remember what Hugh Millen told me last week: "If Russel Wilson ever does anything, I'll come over there and eat your microphone."

How is Kellen Moore still on the board and Russell Wilson drafted? If u want an undersized QB, take the 4-yr starter w/14,000 yds passing.

Here’s how Bleacher Report summed up the Wilson pick the following day:

As if the day wasn’t bad enough, Seattle selecting Russell Wilson, a QB that doesn’t fit their offense at all, was by far the worst move of the draft. With the two worst moves of the draft, Seattle is the only team that received an F on draft day.

They made a questionable move at the top with Irvin, bounced back by taking Wagner, but then took Russell Wilson in the third when they just signed Matt Flynn. Why?

Kevin Lyttle from the Austin American-Statesman thought so little of Russell Wilson that his Seahawks analysis in his draft grades column (he gave Seattle a D+) lamented that the team still didn’t have a QB:

Bottom line: Pete Carroll and cohorts think they’re a bit smarter than everyone else. Maybe they are. We’ll see with this group. Still, no QB, though.

The most popular comparison for Wilson was Seneca Wallace, whom you may or may not remember as a semi-serviceable dual-threat backup QB who spent five seasons with the Seahawks.

so #Seahawks fans, how much did you miss Seneca Wallace? Cause he's returning in the form of Russell Wilson

Hugh Millen: "I don't see Russell Wilson being anything more than Seneca Wallace. I'm higher on Josh Portis as a prospect." #Seahawks

Mel Kiper just now on SportsCenter talking about UW QB Russell Wilson. "He could be a Seneca Wallace."

Kiper on Russell Wilson: "I think he'll have a Seneca Wallace-type career where you can bring him off the bench and he'll add a spark."

ESPN's Mel Kiper on Russell Wilson: "He's a Seneca Wallace type. I think he goes in that 4th-round area & has a serviceable NFL career."

So many people compared Wilson to Wallace on Draft Day that Wallace began trending on Twitter.

As you surely know, Wilson went on to start for the Seahawks from Day One, ending Flynn’s stint as the team’s franchise QB before it even began, and led Seattle to the playoffs as a rookie. In his second year, the Seahawks won the Super Bowl.

Wilson is now a three-time Pro Bowler and one of the best quarterbacks in the league. He also has loads of endorsements and is married to a pop star.

Seneca Wallace played his last NFL game in 2013. He had a very nice, respectable career.