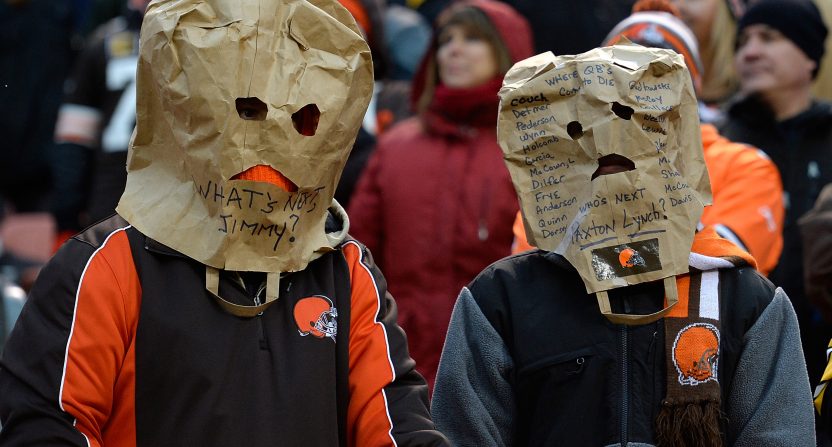 The Cleveland Browns went 1-15 last season for the worst record in the NFL, finishing 31st out of 32 teams in points scored and 30th in points allowed.

Still, if you squint you might be able to convince yourself they have a bright future. They have a respected coach in Hue Jackson and some multi-time Pro Bowlers like Joe Thomas and Joe Haden. Most importantly, they’ve got the top pick in the upcoming NFL Draft, with several potential stars on the board.

If you’re at all nodding along and thinking, “Yeah, maybe they do have a bright future,” you’re part of a long lineage of optimists. Since the Browns returned to Cleveland in 1999, someone has suggested almost every single year that the team had a bright future, only to be proven incorrect season after season.

Here’s the offending “bright future” comment, along with the team’s record the following season.

Before the 1999 season, the future was bright

“The new Cleveland Browns have done a masterful job of building the foundation for a bright future.”

Before the 2005 season, the future was bright

“It’s going to get turned around now. You’re on the right track.”

During the 2006 season, the future was bright

“They’ve already proven to me that the foundation of this team is pretty strong. You’ve got a young quarterback [Charlie Frye] who can be a playmaker, and who has the trust of his teammates. You got a tight end [Kellen Winslow Jr.] who has backed up all his talk, and is clearly going to be a premier player in this league. And you have a defense that has lots of young talent, but is already pretty tough to play. So, yeah, I like where the Browns are going.”

Going into 2007… no one really thought the future was bright

We legitimately couldn’t find any “future is bright” sentiments before the 2007 season, which is funny because…

Before the 2008 season, the future was ‘finally’ bright

Looking ahead to the 2009 season, Brady Quinn was the answer

Entering 2010 the future was, you guessed it… bright

WOW! Listening to Holmgrens presser and I now know why the Browns hired him! Bright bright future ahead for the Browny faithful!

The future was very bright heading into the 2011 season

Sure, the play-calling/clock management in OT was pretty bad. But the negativity today is ridiculous. Browns have such a bright future

#Browns coach Eric Mangini said the organization has a bright future and "I'm excited to be a part of that.''#nfl

The future looked even brighter heading into 2012

@AlexMiglio I can see why Warren Sapp is saying the positive things about the Browns lately. Bright future. The division is the only issue.

@ToneyisAwesome I think the future is bright for the Cleveland Browns. They will tougher than some expect this season. @AustinDJordan

Hoping the Browns stay competitive today as the future should be bright. And we are still not the Bengals

Even though the Browns lost I can finally say I see a bright future. QB's arm is strong and running game is good. Gonna take time though.

#Browns Holmgren said he thinks Weeden can be the Browns' quarterback of the future. 'I think orgz has a bright future cuz it's found QB''

The future was bright with Brandon Weeden looking ahead to 2013

That bright future still laid ahead in 2014

@TonyE7 I thought rooting for the Lions was brutal. Browns have a decent foundation and a lot of high picks next year. Future looks bright

I don't know if I should be sad about a Browns loss or happy about a higher draft position. The future is looking bright in Cleveland

It takes time to turn the corner and learn how to handle success. The #Browns have a bright future. Today shows they aren’t there yet.

#Browns Andrew Hawkins and TE Gary Barnidge agree that future is bright with Manziel. GB:"He has a great chance to be one of the great QBs''

“And when asked if the future is bright for the Browns at quarterback with Manziel, he said, ‘I definitely think so.'”

Yep, the future was bright entering 2016

There is nothing more important in sports than QB, & the Browns can draft the best one in 2016. Hue & best QB will make the future bright…

After all that, they still haven’t learned entering 2017

With nowhere to go but up, the Cleveland Browns future is bright and we should be excited for what's in store https://t.co/Ra1zCQbqcb

“Browns have reason to believe future is bright”

“I think the track that we’re on, the trajectory, is a good one, starting with keeping the staff in place, keeping the management team in place,” Thomas said. “I think the stated goal this offseason is to start bringing in some free agents, resign some of our really quality young players, [and] obviously everybody knows about the number of draft picks we have.