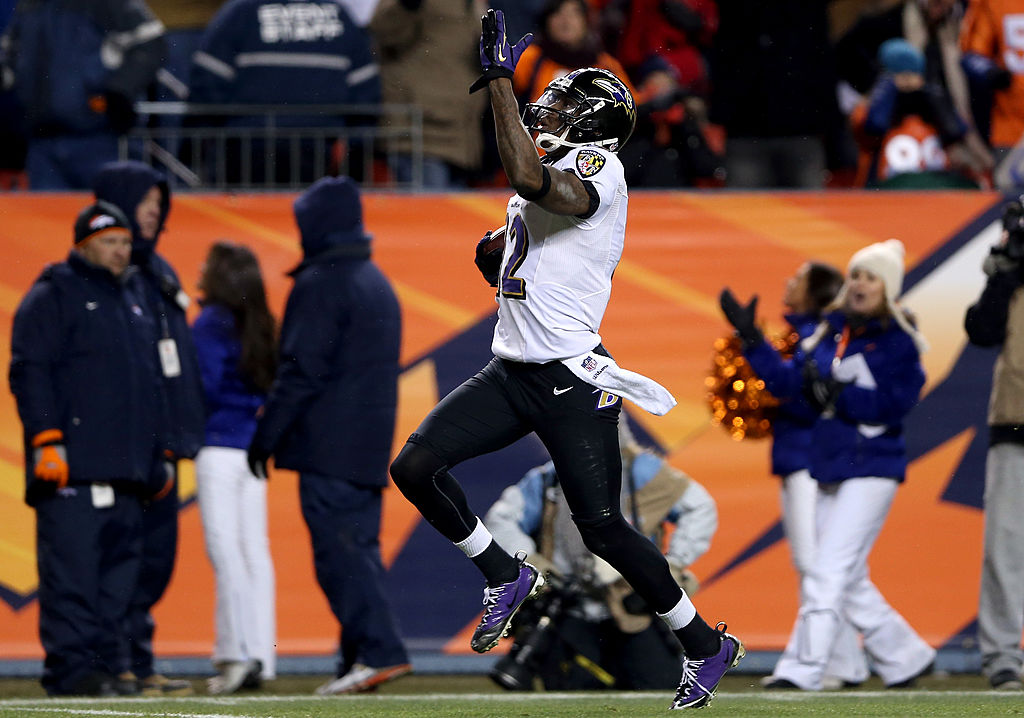 Thursday is the anniversary of one of the most memorable plays in NFL playoff history – Joe Flacco’s 70 yard touchdown pass to Jacoby Jones with 31 seconds left in the Ravens 2012 AFC Divisional Playoff game in Denver. The touchdown tied the game at 35, and Baltimore would eventually win in overtime.

In case your memory is failing, here’s the play.

Baltimore Ravens QB Joe Flacco launches a huge pass to WR Jacoby Jones who some makes his way by the Denver Broncos defender to score 6. Subscribe to the NFL YouTube channel to see immediate in-game highlights from your favorite teams and players, daily fantasy football updates, all your favorite NFL Network podcasts, and more!

Opening as a 10 point Vegas underdog, few expected the Ravens to march into Denver and beat the Broncos…

Broncos are gonna whoop some

Truth be told…Nobody outside the Ravens team and family believes they can win today.

Broncos 118-3. The broncos will attempt a 85 yrd field goal late and miss right then the ravens will make it to avoid the shutout #broncos

But maybe Vegas knew something about the Ravens – the Broncos were just a 7.5 point favorite at gametime…

But Baltimore took Denver’s first shot and responded. Flacco threw a 59-yard touchdown pass to Torrey Smith on the Ravens’ second drive, and Denver quarterback Peyton Manning’s second pass of the day was picked off and returned for a touchdown by Corey Graham to give the Ravens a 14-7 lead.

Denver would score on two of their next three drives to go ahead 21-14, but another Flacco touchdown pass to Smith before halftime tied the game at 21 going into the break.

The second half started with a bang as Holliday returned the opening kickoff 104 yards for a touchdown to give the Broncos a 28-21 lead. Baltimore would grind their way through until the end of the third quarter, when they tied the game at 28 after a Ray Rice touchdown run.

In the fourth quarter, Manning showed up again in the clutch, throwing a 17-yard touchdown to Demaryius Thomas to give put the Broncos ahead a 35-28.

Baltimore was running out of time and chances, and when they turned the ball over on downs with 3:16 left, the Ravens obituaries started rolling in on twitter…

This is about every ravens loss since 1999, appropriate way for ray to go out

Turnover on downs after another #Ravens drop, #Broncos vs Patriots next

My Ravens' season is coming to a close, but they covered … #Bittersweet

That's it. Patriots will
play for chance to go to Denver. Wow

1st Down Denver….and that may just be the ball game! #NFL #playoffs #Broncos #Ravens @kevb9495 @mikewhitesport

Thanks for the great memories and motivational speeches @RayLewis, see you in Canton #Ravens #Broncos

Welcome to the final 3:12 of Ray Lewis's career. #Ravens

Looks like Ray Lewis' publicity stunt/motivational ploy was good for only one Ravens playoff win. See ya next year, Ray.

This will be Denver's last win of the season. #BookIt

Broncos prove the can win without @TimTebow

Despite picking up a first down, the Broncos couldn’t kill the clock off completely, and Britton Colquitt was forced to punt the ball away with 1:15 left. The Ravens were out of timeouts, and Flacco needed to take the Ravens 77 yards to send the game to overtime.

Over/under on how many throws it takes for Flacco to throw a pick? #ravens

Ill be happy to root for the #Broncos in the #superbowl!

But this day belonged to Joe Flacco as he hit Jones for that miraculous touchdown on third down, tying the game at 35 and sending it to overtime. The Broncos still had two timeouts and 31 seconds to get the win after the kickoff, but Manning took a knee to send the game to an extra frame.

Overtime was a chess battle for field position. Manning and the Broncos never managed to cross even their own 40, while Flacco and the Ravens only crossed midfield once.

But near the end of the first overtime, Manning got picked off again by Graham.  Three ensuing Ray Rice runs set up Justin Tucker for the game-winning field goal in the second overtime to send the Ravens to the AFC Championship Game in New England.

The rest is history. The Patriots led the AFC Championship Game 13-7 at the half, but three second half touchdown passes by Flacco gave the Ravens a 28-13 win, and a trip to the Super Bowl in New Orleans where they beat the 49ers 34-31. What began with a miracle, ended with a championship.