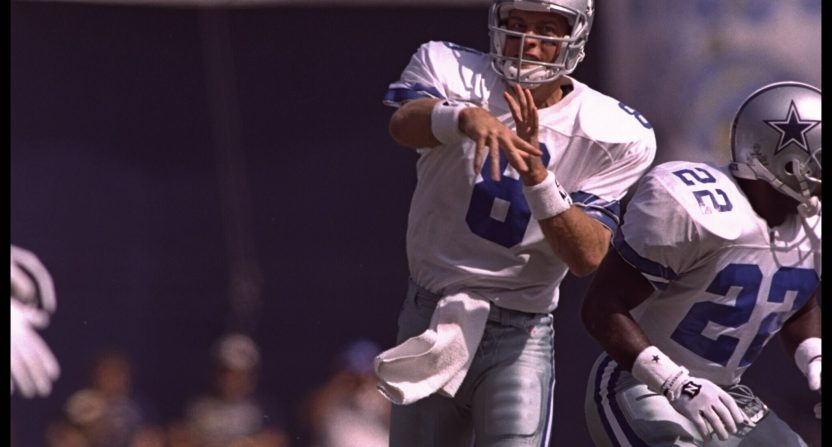 The Dallas Cowboys have had their share of rough years in the last decade but things have never gotten as bad as they got back in 1988. Finishing 3-13, it was the worst season in franchise history since the very first one in 1960 (0-11). It was so bad it ended the storied coaching career of Tom Landry, the only head coach the franchise had ever known. Newly-installed head coach Jimmy Johnson was expected to work wonders but change wasn’t going to happen overnight. First, he had to assemble a team of new talent and that started with the 1989 NFL Draft.

The Cowboys had the top pick that year and were in desperate need of a quarterback to throw the ball to their second-year wideout Michael Irvin. Instead of going for “sure thing” offensive tackle Tony Mandarich, Heisman winner Barry Sanders, or do-it-all defensive back Deion Sanders, Dallas went with UCLA quarterback Troy Aikman.

It seems crazy now considering Aikman would go on to win three Super Bowls while being named to six Pro Bowls and eventually becoming a Hall-of-Famer, but some people weren’t sold on Troy at the time. In fact, even the Cowboys weren’t 100 percent sure as they ended up taking Miami quarterback  Steve Walsh in the NFL’s supplemental draft, forfeiting the number one pick in the 1990 Draft.

Perhaps no one sums up the uncertainly of the Troy Aikman Era right before it started better than Al Carter of the Houston Chronicle, who penned a column titled “Cowboys have Aikman, but where are defenders?” on April 24, 1989, the day after the Cowboys picked their future star.

Officially, it wasn’t a done deal until just after 11 a.m. Sunday. The $11.2 million contract was signed and stapled on Thursday, but there remained the formality of the Dallas Cowboys’ calling Troy Aikman’s name on the top of the NFL draft call. So they made it official. How can anyone else help but do likewise?

Well actually that doesn’t sound so bad, so maybe-

Officially, then, the Cowboys blew it.

In going for the quick fix, the worst team in pro football probably did nothing more than secure itself a future of slow pain. The aches of Aikmania may soon have Cowboy hypochondriacs begging for a good, old-fashioned case of Pellueritis.

Pellueritis is in reference to Steve Pelluer, who had quarterbacked the team the previous season. He would end up asking to be traded after Aikman was drafted. Cowboys fans are probably fine with this.

New Cowboys owner Jerry Jones probably didn’t realize when he opened the bank vaults on Friday that the Aikman price tag would run far beyond his Troy-ounce commitment. The real bill arrived Sunday.

And as we all know, Jerry Jones is now penniless and living in a studio apartment in Frisco.

America’s New Regime finally got to test its competitive skills with the NFL’s best talent sharks. And just three hours after officially landing their quarterback, the Cowboys forfeited their draft strategy.

Al whiffed on Aikman but he also whiffed on the Cowboys’ 1990 Draft when they pulled off the heist of the century (a.k.a. The Herschel Walker Trade).

That’s assuming that Troy Aikman is a reasonable facsimile of Dan Marino. If that seems beyond reason, well, it fits right in with the local football mind-set.

We could probably argue about Aikman va. Marino all day long but they’ve got three Super Bowl rings between them and the only thing on Dan’s hands are some comfy Isotoners.

Was drafting Troy Aikman the best way for a 3-13 football team to expeditiously rebuild itself? Ask just about anyone in the Cowboy watch zone the question and you’ll get, at best, a shrug.

Or, in an intense moment, maybe a yawn.

It’s at this point we should probably point out that the Cowboys would be back in the playoffs within three years and have a Super Bowl under their belt within four. By all accounts, that seems expeditious.

Aikman hasn’t provoked comparisons to John Elway or Terry Bradshaw even from close relatives. But public emotions called this shot. So desperate were glory-starved Cowboys’ fans for an heir to Roger Staubach, even the Tom Landry braintrust considered it a necessity to grab something – anything – quarterbackish.

That “something – anything” ended his career with more Super Bowl rings than Elway and almost as many as Bradshaw. So, eventually, those comparisons were indeed provoked.

Had the Cowboys been able to live with Steve Pelluer, they could have drafted Tony Mandarich. No one yawns over Mandarich, a 310-pound tackle who resembles Anthony Munoz and will now complement running backs in Green Bay.

The Cowboys cowed to the rabble and took Aikman, who, his new employers hope, will work his way up to starter sometime before Mandarich and Thomas are inducted at Canton. Aikman, you see, doesn’t have the job yet.

Al, you should have walked away…

Forgotten, too, is the fact that the Cowboys still have a 1-8 shot of a top two spot in the coming supplemental draft, which includes two quarterbacks comparable to Aikman: Miami’s Steve Walsh and Washington State’s Timm Rosenbach.

Al kinda got this one right as the Cowboys ended up taking Walsh anyway. He split time with Aikman that first season but he was traded away the following year. He spent the 90s as a journeyman quarterback playing for six teams.

As for Timm Rosenbach, he was selected No. 2 in the supplemental draft by the Cardinals, starting the entire 1990 season for them before injuries derailed his career.

So the Cowboys did something to history that year, but it wasn’t a slap.

“We still have a lot of holes to fill,” Johnson said.

There’s no guarantee Aikman has changed the count. Even by one.

So Al must’ve been feeling pretty good about this column in 1989. The Cowboys played through an absolutely dreadful 1-15 campaign and Aikman barely pulled ahead of Walsh in the eyes of the organization. But thanks to smart drafting and building around their signal-caller, drafting Troy Aikman went to become one of the cornerstone decisions of the franchise’s domination of the early-to-mid 1990s.