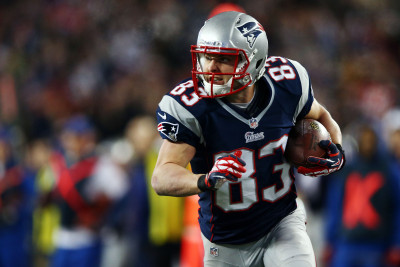 Congratulations to former Dolphins, Patriots, Broncos, and Rams wide receiver Wes Welker, who was just hired by the Texans as an offensive and special teams assistant coach. As a player, Welker was most well known for being Tom Brady’s reliable slot receiver for the Patriots from 2007 to 2012. Perhaps his greatest legacy, however, is that he cemented himself as his generation’s short (Welker is a generous 5’9), tough, underdog, white, slot WR “type” to which all other white WRs of similar build are compared. The comparison has become so widespread and exaggerated that, at this point, any white wide receiver, no matter the size, may potentially be referred to as a “Wes Welker type.”

Welker may be the new “type” of receiver resembling the foregoing description, but he is not the first. Here is a brief summary of a Wes Welker chain of small white receiver “types.” Notice in all of these quotes, Welker and others are compared to other scrappy white receiver types, but the fact that the receivers are white is never included in the comparison.

In 2004, Welker was an undrafted free agent receiver with the San Diego Chargers just trying to make the team. In an April 28 article in the Lubbock Avalanche-Journal (April 27, 2004) article, Welker is compared to veteran Chargers wide receiver and return man Tim Dwight:

Welker said playing on the same team with Dwight, a similar-sized receiver and return man, carried some appeal.

Yes they are of similar size. This is true.

Even before that, in 2013, when Welker was still in college at Texas Tech, a November 12 Austin American-Statesman piece discussed Welker’s chances to play in the NFL:

“…Welker could become the next Steve Tasker if he’s not a reincarnation of Wayne Chrebet. He just needs a shot. Another one.”

Of course they chose Steve Tasker and Wayne Chrebet. The former Bills and Jets receivers were short, scrappy, gutty, gritty, and had good hands. They are also coincidentally, both caucasian.

Lets go back to 2004, where, in May, a piece in the San Diego Union Tribune was bullish on Welker’s chances to make the Chargers:

“But this can happen for Welker.

Or haven’t you seen Dwight in person? Or Wayne Chrebet of the Jets?”

Speaking of Chrebet, at the beginning of his Jets career, he compared himself to…yes, that’s right, Steve Tasker. From a December 18, 1998 New York Daily News article:

Right, dimension. It’s also rather curious that Chrebet chose Steve Tasker here as Tasker was more of a specialist on special teams than an every down wide receiver. Largent, however, was certainly someone worth emulating. The Seattle Seahawks star was a short WR who “fit the profile” that ended up having a Hall of Fame career.

Now Tasker may not have been in on many snaps at WR for the Bills, but that didn’t stop legendary Bills quarterback Jim Kelly from pondering what Tasker could have been if he had been more of an every down player on offense throughout his career. Here’s a tidbit from a January 5, 1996 USA Today article:

Quarterback Jim Kelly had long lobbied for Tasker in the lineup. When Tasker excelled, Kelly suggested he could have been another Steve Largent.

That’s right. Steve Largent. Who would have guessed?

The question now remains, who will step up to become the next Welker/Dwight/Chrebet/Tasker/Largent type? Lets hope someone with the right dimensions that fits the profile steps up.