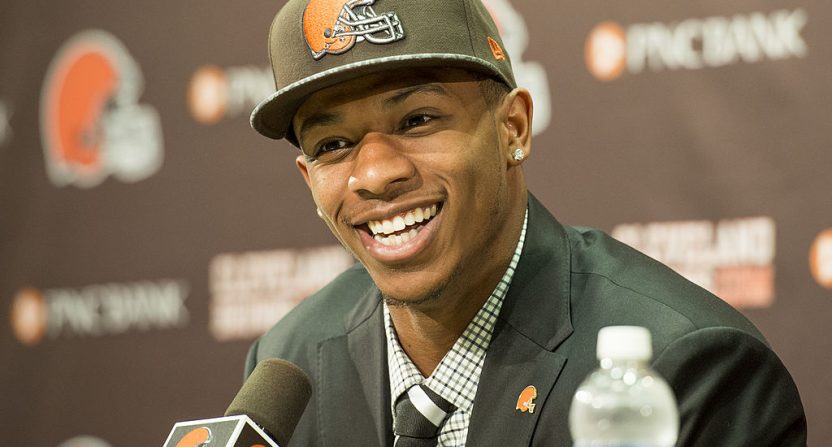 Johnny Manziel gets a lot of attention as a famous draft bust, but Justin Gilbert is perhaps just as notable. Gilbert, released by the Pittsburgh Steelers this week, was the Cleveland Browns’ first pick in the first round of the 2014 NFL draft, eighth overall. (They then later picked Manziel 22nd overall.) He found success in college at Oklahoma State, but only started three games at corner for Cleveland in two seasons, while being late to numerous meetings and taking plenty of criticism.

The Browns traded Gilbert to Pittsburgh this September for a sixth-round pick in 2018, and he appeared in 12 regular-season games for the Steelers this year. He was most prominently used as a kick returner, though, and only returned six kicks for 114 yards in 14 games (including the postseason). Now that he’s been released, his NFL future looks pretty dim.

Even if Gilbert does wind up making a miraculous comeback, though, drafting him still proved disastrous for Cleveland. Not everyone can turn a first-round pick (and especially the eighth-overall one) into three starts over two years and then a sixth-round pick, but former Cleveland GM Ray Farmer managed just that with the Gilbert selection. Farmer also traded up from ninth to grab Gilbert, sending a fifth-round pick to Minnesota in the process. This was baffling to many people given that it didn’t appear that the Vikings had any intention of picking Gilbert. Minnesota’s pick became Stanford guard David Yankey, who actually lasted even less time with the team that drafted him (he was cut in September 2015), but is still in the NFL (with Carolina).

Farmer’s decision to pick Gilbert took some criticism at the time, which we’ll get to below. Few saw it being as bad as it actually was, though. And plenty of analysts were very high on Gilbert ahead of the draft:

Justin Gilbert reminds me a lot of Champ Bailey coming out of Georgia. Love his length + athleticism & tackling ability + speed.

Why Justin Gilbert is The Rock (the most electrifying CB) of the 2014 NFL draft. http://t.co/2TgbAofyOV via @BR_NFL

That linked piece, written by Frenz, is generally glowing (although it does mention that Gilbert’s technique and footwork were inconsistent, and that he could be a boom-or-bust pick). Here’s an example:

Gilbert has the rare combination of size and speed that is generating buzz about a future as a shutdown cornerback in the NFL. At 6’0″, 202 pounds, with 33.125″ arms, he has the long frame to lock horns one-on-one with the best receivers in the league. He also has the speed to match up with them stride-for-stride, as shown in running a 4.37-second 40-yard dash at the combine, the fastest time for any cornerback this year.

Another analyst who was very high on Gilbert was Bleacher Report’s Matt Miller:

For the new followers, my love of Justin Gilbert may become annoying to you. But he's a freak. Top 10 talent on my board.

Love him. Prototypical cornerback. RT @DrMoserr: what do you think of Justin Gilbert this year?

And he was far from alone:

Today is Justin Gilbert day. He is Darius Slay 2.0. You could strip away the unis and they're the same guy.

Gilbert was high on himself, too, especially in comparison to other top cornerback prospect Darqueze Dennard (who was picked 24th overall by Cincinnati and is still with the Bengals.  Here’s what he told USA Today‘s Jim Corbett ahead of the draft:

I believe I’m the best cornerback in this draft. I model my style of play after Patrick Peterson,” Gilbert told USA TODAY Sports, referencing the Pro Bowl cornerback and kick returner for the Arizona Cardinals. “If Deion Sanders was still playing, I’d compare myself to him.

“Not a lot of corners have my return ability. When I catch an interception, I’m not just looking to go down. I’m looking to do something after the catch.”

Asked to compare himself to the draft’s other top cornerback, Michigan State’s Darqueze Dennard, Gilbert continued to come on strong.

“I’m not really sold on his game or style of play,” Gilbert said. “Is this his first year really making a name for himself? I’ve been making plays since my sophomore year. It’s something I’m not too hyped up about me being up there with him in the top two.

“I think I should be separated from the pack.”

Well, he was eventually separated from the pack, but not in the way that he hoped.

Some thought Dennard was the better prospect:

Dennard hasn’t exactly dazzled for the Cincinnati, as he hasn’t played all that much in his first three seasons. However, the Bengals still seem to believe he will eventually contribute.

Before the draft, ESPN’s draft gurus Todd McShay and Mel Kiper did not seem very high on Gilbert:

“(Gilbert’s) the kind of guy, to me, is not what I thought he was going to be, in terms of the top 10 or 15. He still could be, but he’s just not physical enough in run support,” Kiper said. “You got to be able to tackle as well after the catch. That’s the underrated part of playing corner. The most important thing is tackling in the open after the catch. There are times when I saw him struggle.

Todd McShay on Justin Gilbert: "Gives up lot of separation in covg. Not that physical & not that good at tackling. Missed a lot of tackles."

When the Browns selected Gilbert, McShay appeared to soften his stance:

In that video, McShay called Gilbert “an intriguing prospect” and “a big-time ballhawk,” and is generally pretty high on him as a player (if perhaps not at the slot he was taken at), especially saying he “fits well” in Cleveland.

Others thought the Browns did reasonably well with the selection.

RantSports’ Greg Sulik also graded the pick as a B+, saying “He has the potential to become a shut down cover corner at the next level. Gilbert should also make an immediate impact for the Browns as a kick returner.” And SB Nation’s Matthew Fairburn gave the Browns a B-, criticizing Gilbert’s inconsistency and technique, but saying the pick gave Cleveland another good outside corner to go with Joe Haden.

There were plenty of people who figured the Browns were wrong at the time. Their takes look much better than the pro-Gilbert ones today.

Justin Gilbert: I liked two other CBs better, but Browns need corner help. Why not a QB? GRADE: C http://t.co/KPxAyHqyNs

Such a Browns thing to do, jumping up for no apparent reason to grab Oklahoma State CB Justin Gilbert.

It’s worth pointing out that Gilbert’s failures may not have been due to his talent and raw ability.  Here’s an interesting tweet about Gilbert by former teammate and current Browns OL Joe Thomas…

If you don't like football, it doesn't matter how talented you are, your star will burn out quick. https://t.co/r7PfDSTljL

Some things are harder to evaluate than others. Just another reason why drafting players is no cakewalk.