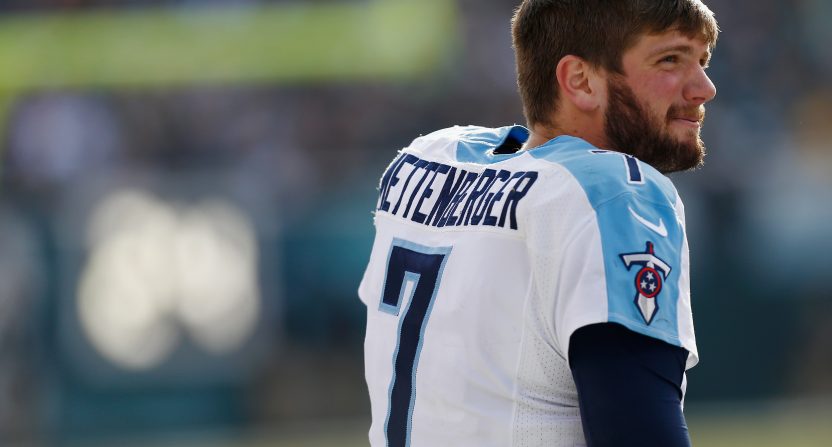 The NFL Draft is the yearly tradition in which hundreds of new players enter the league with high hopes of earning big contracts, making big plays, and becoming stars. Unfortunately, in order to make room for all this fresh talent, spaces needed to be opened up. That’s the case in Pittsburgh where Zach Mettenberger was cut to make room for the Steelers’ fourth round pick Josh Dobbs.

After being picked in the sixth round in 2014 by the Tennessee Titans, Mettenberger was claimed off waivers by the San Diego Chargers last May. They in turn cut him in August and he was claimed by Pittsburgh. He didn’t play in any regular-season games for the Steelers and the writing was on the wall before Dobbs was even selected.

In his two seasons with the Titans, Mettenberger started ten games but failed to deliver on any promise he showed before he made it to the NFL. And boy did he show promise. Just look at all the people who were falling all over themselves to be the first one to let you know that Zach was going to be a big star one day.

Long before the 2014 NFL Draft, Clay Travis was first in line on #TeamMettenberger.

“If I’m wrong, you can ridicule me to no end.” Done and done!

When the 2014 Draft was finally here and Zach went in the sixth round (news of a diluted drug sample breaking a few days before the draft did not help his cause), the praise heaped on him and the Titans was solid.

I like the #Titans pick of Mettenberger here. They could have landed their future starter here in the 6th round.

Tenn. Titans get a bargain on Mettenberger in 6th round,

Great fit for Mettenberger with Whisenhunt in Tennessee.

I think @TennesseeTitans DRAFT PICKS look GREAT! Mettenberger LSU QB is a real sleeper! Lots of help it seems on both the sides of the ball

@wilpetty No, I'd say it was a GREAT choice. I'm sold on Mettenberger being a better pro than he was a collegian.

Zach Mettenberger joins Blake Bortles as the only other A+ grade so far pic.twitter.com/S9TaTXelgy

You know what they say. There’s more to life than good grades.

NFL reporter Gregg Rosenthal thought all of the pieces were in place for Mettenberger to make some noise.

Mettenberger believed that he matured plenty in college, but NFL teams were ultimately scared away. With that said, he’s in a good position for a sixth-round pick. Jake Locker’s contract ends in 2014 and the Titans are unsure if Locker is their guy long-term. Charlie Whitehurst is in place, but he’s a career backup. New coach Ken Whisenhunt does well coaching up quarterbacks of all shapes and sizes, and Whiz now has an investment in Mettenberger.

It’s not about where you are drafted; it’s often about the opportunity when you get there. Mettenberger is at least in a spot to make some noise.

People who doubted Jake Locker’s longterm viability as the Titans’ starter were right about that. Locker was out of a job and retired a year later. But Mettenberger wasn’t the guy to replace him.

Even a year later, the takes were still coming in hot. Perhaps none hotter than NFL Films executive producer Greg Cosell, who told Nashville radio station 104.5 The Zone that  if the Tennessee Titans had the No. 1 pick in 2015, he’d ride with Mettenberger rather than taking presumptive No. 1 overall pick, Florida State’s Jameis Winston.

“You look for traits. When you do that with Jameis Winston … he’s a pocket quarterback for the most part. His strengths are anticipation. Zach Mettenberger, by the way, is a pocket quarterback who is very good at making anticipatory throws, arguably better than Jameis Winston at making anticipatory throws. Zach Mettenberger actually has a bigger arm than Jameis Winston. They’re both a little bit slow-twitch in the pocket. They’re both a little bit heavy-footed, which of course are negatives, but they’re very similar in that regard. In many of the traits, and I’m just scratching the surface by the way, but in many of the traits that you look for, you would say that they’re similar and that Mettenberger is a little bit better.

“… They’re not that different. When Zach Mettenberger came out of LSU and Jameis Winston’s coming out of Florida State, there’s not a whole lot (of) difference when you just look at traits and attributes.”

Winston was indeed taken No. 1 overall that year by the Tampa Bay Buccaneers. All he did in his rookie season was pass for over 4,000 yards in a season and become the first Bucs rookie QB to be selected for the Pro Bowl. Mettenberger, meanwhile, would end the year with 935 yards, five touchdowns, and seven interceptions in seven games. The Titans would cut him soon after.

Zach may still catch on someplace else for another shot, but, the chances that he’ll ever live to all of the above hype are extremely slim.