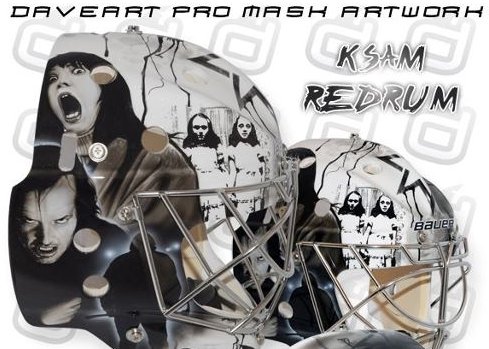 Goaltenders are a strange breed. It's assumed one has to be in order to willingly stand in front a frozen piece of vulcanized rubber hurtling at over 100 miles per hour. However, like any eccentric group of people there are some goaltenders that redefine the meaning of bizarre.

Meet Richard Bachman, goaltender for the Dallas Stars. Unless you follow the Dallas Stars closely you're probably not very familiar with Bachman, a goaltender that has only appeared in 19 career NHL games. Bachman might be a face you'll forget but it's safe to say he will sport a mask this season you won't be able to erase from your memory anytime soon.

You might be wondering why Bachman would want to wear a mask depicting one of the most iconic horror films in history, The Shining. The answer is actually quite simple. Stephen King, the legendary author, occasionally would write under the pen name of Richard Bachman. Due to this similarity of names with arguably the master of horror literature, Bachman decided to use his mask as a tribute (Source – DAVEART).

The mask is yet another incredible design to emerge from DAVEART. On their Facebook page they revealed that King was Bachman's inspiration, so the group attempted to think outside the box and come up with a mask that was sure to get the hockey community buzzing.

You almost expect Bachman's mask to come alive thanks to the realisitc depictions of The Shining's main characters on the mask's right side. From a screaming Wendy Torrance to Jack Torrance complete with ax, the references to The Shining are numerous. Keener eyes will even notice the classic scene of Danny Torrance riding around the Overlook Hotel on his tricycle near the bottom of Bachman's mask. The scene ends with Danny running into two creepy twins, also depicted on Bachman's new headgear.

Goaltender masks have a cult following, with droves of fans waiting to see what a goaltender might choose to display next. From Casey Jones of the Teenage Mutant Ninja Turtles on Brian Elliott's mask to Donkey Kong on Jason Missiaen's, you never know what you'll find staring back at you during a hockey game. At the very least we know Bachman has the horror genre of goaltending masks covered.