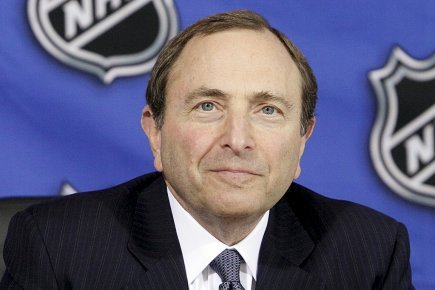 If an NHL lockout delays or consumes the 2012-13 season, who should we blame? This was the question I posed on Twitter in an attempt to measure the general pulse of the fans. The sample size was admittedly small but the idea was to get an idea of what the average fan thinks of the impending lockout.

Would you blame the owners or the players? Would you blame both sides equally? Find out what other fans said and voice your opinion in the comments section.

The responses I received were all over the place. Some blamed the players, more blamed the owners. A significant number of fans blamed both sides but were quick to point out that they slightly leaned on the owners being more at fault. As you'd expect, I also received a few creative responses which didn't assing blame to either side (more on this later).

It's maddening that both sides seem to think this negotiating process should be a long one without any sense of urgency. Donald Fehr, executive director of the NHLPA, has been slow in presenting a counteroffer to the league. It's safe to assume this is a negotiation tactic but it is one that is drawing us ever closer to the September 15th date that could begin an NHL lockout in 2012-13.

Let's make a counteroffer and actually get this ball rolling. Both sides should be working feverishly in getting a new CBA agreed to. Now is not the time to delay.

The 2004-05 lockout really wasn't that long ago. The last CBA really should have done a better job of putting us in a better position than we currently are in some eight years later. The 2004-05 agreement was successful in getting hockey back for 2005-06 but it failed to set the league up for success as we currently see in CBA negotiations less than 10 years later. However, that fact aside, you can see that here one fan is blaming the owners more than the players – a common theme found on Twitter.

Here another fan blames the owners and mentions that crazy contracts that we have seen handed out in recent months and years have placed the owners at fault. It's frustrating that the owners aren't hesitant to hand out a bloated X-year contract for $100 million or more only to then cry foul and demand to have a larger percentage of the revenue because they are short on cash. Unless I'm mistaken, no one was forcing any of these owners to award players massive contracts.

The owners are responsible to improve their team but they shouldn't have tried to improve based on the idea that they could award hugely flawed contracts only to then demand more money during the CBA negotiations. A player is only worth what someone is willing to pay for him. If the owners as a whole had some sense we wouldn't be facing a situation where two players, Ryan Suter and Zach Parise, could both get nearly $100 million a piece only to later have the owners as a whole say they are broke.

The issue here appears to be more between owners and other owners as opposed to owners versus players.

Here one fan points out that the real issue appears to be owners vs. owners and not so much owners vs. players. Certain owners (the haves) have put tremendous pressure on other owners (the have nots). While one owner is in no position financially to hand out a contract any larger than $4 or $5 million a year, another might be in a position to give out multiple contracts worth $8 million or more a year.

Some teams and owners are genuinely struggling financially and would benefit from additional money under a new CBA. However, some teams are doing perfectly fine as evidenced by the insane contracts we have seen awarded this summer and over the past couple seasons. Where certain teams need help, others do not. The ones that are doing just fine, awarding mammoth deals, have cast the owners as a group under an extremely negative light.

Fellow Puck Drunk Love writer J.P. Quayle voiced his opinion, placing the blame on the current system as opposed to assigning blame to the owners or players. He believes the current system isn't set up to help a franchise that's struggling. He labels it as a league issue and an issue at the club level.

In my opinion, the NHL needs to focus on coming up with some solutions so that we never have to see a city lose their NHL franchise. The Atlanta Thrashers might be currently excelling as the Winnipeg Jets but the fact remains that the situation should have never been allowed to get to a point where the NHL needs to relocate. That being said, perhaps this issue is one about the NHL being a bit more selective in where they choose to open a new team. Winnipeg is a success currently but we will have to wait and see how that situation unfolds over the coming years.

Finally, we'll conclude on one of the most interesting and unique responses I received. This fan places the blame on the media and the current broadcast deal the NHL has. I'm not sure I follow this fan's thinking as the media will only pay X amount of dollars for X amount of viewers. If an NHL game brings in five million viewers you won't find multiple companies trying to bid millions above the estimated value of five million viewers. However, I tend to agree that the media is partially to blame in the NHL's growth as we have seen countless examples of how major media in hockey cities fail to deliver adequate hockey coverage. It's almost a Catch-22 situation – if the NHL was bigger it would require more media coverage. It there was more media coverage the NHL might be bigger.

As you can see the responses I received were all over the map. Without getting overly scientific, it's clear that the fans that responded generally blame the owners but also believe that both sides are responsible due to the fact this sort of issue could have been avoided. I did find it interesting that none of the responses I received singled out Gary Bettman, though I imagine that the opinion that the owners are to blame includes Bettman as a representative of the owners. Still, I expected to find a plethora of "Fire Bettman" comments only to find my Twitter feed lacking such a response.

Which side do you think is to blame? Voice your opinion below. Also be sure to follow me on Twitter (@FrozenNotes) as I'll be running more of these informal polls in the future.