If you read the Puck Drunk Love staff predictions from earlier this week you will have noticed that all of us selected the Pittsburgh Penguins and Vancouver Canucks to advance past the first round. After two games in each series, both the Canucks and Penguins find themselves in a surprising 0-2 hole despite enjoying home ice advantage.

To be fair, both of these series have a lot of hockey left and we shouldn’t crown a champion after just two games. However, the statement made by both the Los Angeles Kings and the Philadelphia Flyers by stealing away two games on the road as the series prepares to come back to their respected rinks is a huge story. 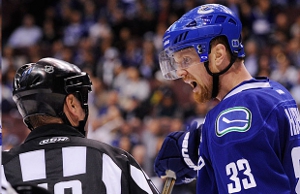 Flipping over to the Eastern Conference, it’s safe to say that if Philadelphia is able to hold on and top Pittsburgh that it shouldn’t be considered an upset. Most analysts selected this series as the “one to watch” of the first round as it featured two strong Cup contenders squaring off early in the playoffs. This battle between a 4th seed and a 5th seed has no clear favorite and has no clear underdog. Most experts selected the Penguins but I doubt any of them would be too surprised if the Flyers emerged the victor.

The Canucks might not be so lucky. They’ve been forced to play without an important piece of their offense, Daniel Sedin, and have had their defense and goaltending exposed numerous times. The Canucks have also looked dreadful on special teams, allowing LA’s power-play to convert once while conceding two critical short-handed goals to the Kings in Game 2.

In net, plenty of questions were asked before the series even started. Is Roberto Luongo dependable enough in net? Can he put his mental lapses and soft goals behind him, or should the Canucks look to Cory Schneider? Unlike the Pittsburgh / Philadelphia series, LA besting Vancouver would be an enormous upset. An eighth seed that barely squeaked into the playoffs knocking off the Presidents’ Trophy winner would be quite the surprise.

Personally, I think Vancouver is in a much worse spot than the Penguins despite both series sitting at 0-2. The Penguins have shown brilliance during their first two games but have seen the Flyers play at an even more impressive level to take the first two games. The first two games in this LA / Vancouver series have seen the Kings play some great hockey but more importantly, seen the Canucks play potentially their worst hockey of the season. Where Pittsburgh should eventually find a positive result based on the play we have seen from them, Vancouver needs to make big changes if they hope to extend this series.