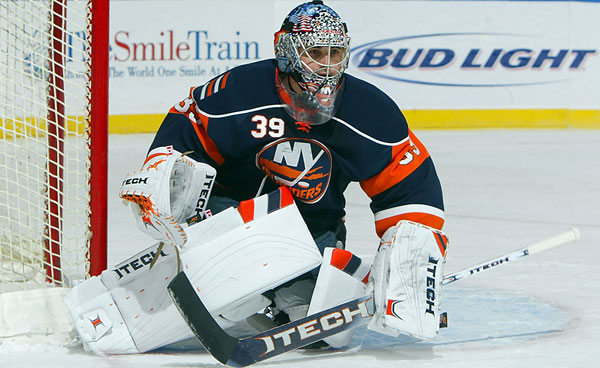 If you’re a hockey fan that even occasionally uses the Internet, you’re well aware of the punchline that is Rick DiPietro’s health. However, sometimes the joke just isn’t funny anymore when it just continually keeps repeating itself.

Today, we learned that the 2011-12 season is likely over for Rick DiPietro due to a sports hernia, as seen on Puck Daddy. DiPietro was already listed on the IR with a groin injury dating back to December 4th, but now a new injury has emerged that will all but end his work for the current year. DiPietro could make an appearance in April but it’s hard to picture the club using the fragile goaltender for a handful of games before the year concludes instead of giving him a sizable amount of time off.

DiPietro has appeared in eight games this season, compiling a 3-2-3 record with a 3.73 GAA and a save percentage of .876%. The numbers themselves aren’t very impressive but then again the real story here has nothing to do with DiPietro’s actual play between the pipes – the story is he is rarely there.

In case you’re unfamiliar, DiPietro signed a massive 15-year contract with the New York Islanders back in 2006. The deal, one that was heavily scrutinized at the time for its considerable length, has looked worse and worse each season due to DiPietro’s inability to keep a clean bill of health.

Just how bad is his history with injuries? Bad. Extremely bad.

Starting with the 2008-09 season, DiPietro has appeared in only 47 games. During that time he is 14-24-7, but again, the statistics themselves are lost behind the volume of play.

Just what has kept DiPietro out of the lineup? Take your pick – he’s had just about everything.

Add in the occasional flu and “personal reasons” absence and you’ve got just about every possibility in the book covered.

The bright side? Unfortunately for the Isles there really isn’t one. Once the 2011-12 season wraps, DiPietro still has nine years left on his contract worth an estimated $40.5 million. He also carries an annual $4.5 cap hit on the Isles payroll.

If you’re the Isles, the odds of you being able to trade or move DiPietro’s bloated deal is basically non-existent. No one is about to take on that big/long of a deal involving a player that rarely, if ever, plays.

If you’re Rick DiPietro, what else can you do besides try to stay healthy and play? Fans have questioned whether or not DiPietro should just hang it up, but that doesn’t appear to be a thought in the goaltender’s mind at this time. Given how much money he is owed and how little he has proved, you can’t blame him for trying to gut it out despite his body continually saying no.

Now we wait, watch and hope for the best from a situation that just keeps on getting more and more depressing for Islander fans. We can hope that eventually this long streak of bad luck will end for DiPietro and that we might finally see him in regular action for more than just a few weeks at a time. If you’re really reaching for a bright spot, at the very least, while DiPietro is out of action we won’t witness him on the losing end of any one-sided fights, like the one above against Brent Johnson.