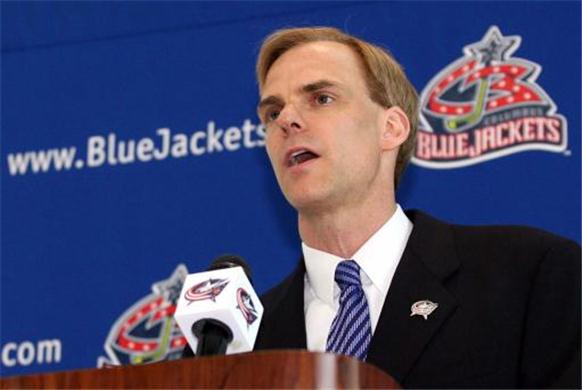 A disclaimer: I was an Atlanta Thrashers fan. After watching eleven years of Don Waddell do God knows what (the Hossa trade? The Kovalchuk trade? come on now) with a hockey team has me paranoid regarding other teams’ general managers. When teams in markets that aren’t the biggest in the NHL do stupid stuff, it worries me. Columbus GM Scott Howson has had me on the edge of my seat all summer long in regards as to what he was planning on with the trade of Blue Jackets captain Rick Nash. I was hoping he wouldn’t botch the deal, because I know how it feels to have your team’s captain traded. Regardless of if the situation’s become a distraction or not, there’s still something sad about seeing the face of your franchise leave for admittedly sunnier pastures.

Howson did not bungle the trade. Sure, he didn’t get what he wanted for at the trade deadline or even the NHL draft, but he also didn’t get cogs. He wound up with two forwards in Brandon Dubinsky and Artem Anisimov who combined could replicate Nash’s scoring. He wasn’t going to get top youth from other teams like Jeff Skinner or Logan Couture. That just wasn’t happening, and I think everyone knew it.

Columbus fans are ok with the deal in general, but Howson had to write a letter explaining his and his team’s decision to their fans. That’s a noble idea — Waddell did that to explain the Kovalchuk situation. His letter, however, shows how out of touch he is in between all of the platitudes.

There is no denying that the Jackets are now focused on the future — they have no choice. But the future of Cup contention that Howson references in his letter is years off. It might be farther off than that if Howson’s allowed to remain at his post. Says Howson:

We are also very excited about the other moves we’ve made over the past several months. A solid defense and good goaltending give teams the opportunity to win consistently in the NHL and we believe the additions to our blue line of Jack Johnson, Adrian Aucoin and 2012 first round pick Ryan Murray, along with newly acquired goaltender Sergei Bobrovsky, will result in our club being much-improved defensively. We also have assembled the most experienced coaching staff we’ve ever had.

We are committed to building a team that plays an exciting brand of hockey, competes every night and ultimately achieves the goal of winning a Stanley Cup. Anything less is unacceptable, and we will do whatever it takes to build a winner. Columbus is a great hockey market. Our fans know the game and the level of passion, enthusiasm and loyalty you have exhibited over the past 12 years is nothing short of remarkable. Today we have a clear vision of the future and are working every day to give you the type of team you deserve.

I understand that spin is a necessity, and the players that they added aren’t un-talented. Not in the least. But you can polish a turd, and all you really have is a shiny turd.

No one in their fanbase believes that Steve Mason and Sergei Bobrovsky will win a Cup, let alone get deep into the playoffs. Jack Johnson and Adrian Aucion are both good defensemen, but that’s about as far as you go unless you pin your hopes on a kid whose first year will be a trial by fire season.

The most experienced coaching staff you’ve ever had? Scott, Todd Richards is not more experienced than Ken Hitchcock. In no world is that true. Craig Hartsburg and Keith Acton will be responsible for holding stuff together. I’m sure they’re thrilled.

The Blue Jackets fans deserve a hell of a team. Howson isn’t working towards that — he’s maintaining the status quo, and that’s dangerous. The Jackets need to be competitive — I WANT them to be competitive — because it’s no fun if they’re sub-par. If fans of other teams realize this, why is it taking Howson so long?