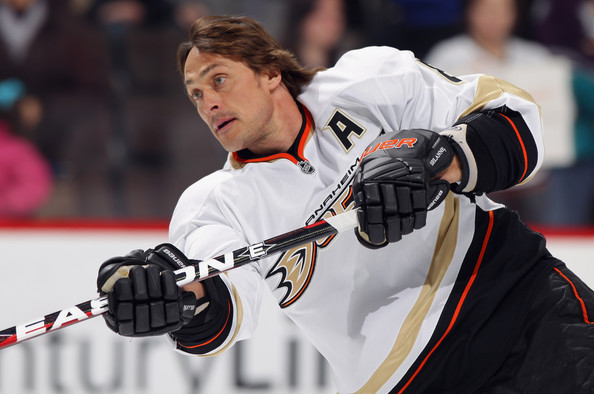 Breathe easy, hockey fans. Those of you who want to cling to your youth (such as yours truly) have dodged a bullet today. Teemu Selanne, the 42 year old forward who plays like a man half of his age, agreed to one more year with the Anaheim Ducks. According to Lisa Dillman his contract is worth $4.5 million, which is a half-million more than he made last season.

Does someone of his age deserve a raise? Well, when you consider that Selanne scored 26 goals and 66 points last season, it’s hard to argue against it. He’s older, yes. Is this his last season? Chances are good… but he’s playing better than most of the forwards in the league ten years younger than he is. I’m not sure if it’s training, conditioning, or genetics, but Selanne always strikes me as someone who could continue to play until he’s 50 and still contribute to a team. His age isn’t a joke and it’s not a reference point — it’s a point of wonder. He’s been playing for twenty seasons, and he still played all 82 games last season. If you can’t marvel at that, then you can’t marvel at anything.

Lifetime Selanne has 663 goals and 1406 points in 1341 games. He holds six franchise records and three single season records for the Ducks, and two single-season records for goals (76) and points (132) for the Jets/Coyotes franchise. As if you needed reminding, he put up those totals his rookie season which also set a record league wide for rookie scoring that may never be broken.