We've talked a lot about the NHL lockout lately. We've covered various sides of the topic, including the face behind it – Gary Bettman – as well as the fans suffering through it. One area we haven't covered is the veterans near the end of their careers. This group of players will arguably be hurt by an extended lockout the most as they prepare to hang up their skates.

With that we discuss which NHL veterans might be hurt the most if the current lockout lasts a full season.

It's a requirement in every lockout article that we note this whole post could become obsolete if the owners and players come to their senses. Make it happen, guys. It's also worth noting that this list is an admittedly brief one. Let us know who we missed in the comments.

This is the most obvious one. Selanne is one of those rare players that you're forced to respect regardless of which team you pull for. The Anaheim Ducks left wing transcends rivalries and is one of the most liked players currently in the NHL. For the past several seasons we've speculated that Selanne might be preparing to finally call it quits, but he has continually signed one-year extensions, prolonging our love affair.

Will the current lockout signal the end of the Teemu Selanne era? It's certainly possible.

At 42, Selanne doesn't have much time left. When he signed a new $4.5 million contract prior to 2012-13, it was apparent that this would be his final year. If the lockout destroys this season, it's unclear if Selanne would attempt to keep going after a year off or if he would call it a career.

Selanne might be the worst on-ice casualty of a prolonged lockout. His career deserves to end on a more positive note. Still, we imagine he'd find a way to skate one more year even if the lockout lasts a full season. This might mean a short-term deal or some sort of cameo, we'd just hate to see an entire season of Teemu wasted.

Brodeur has a two-year contract that will last through the 2013-14 season. This means that barring a lockout that lasts more than one full season, we haven't seen the last of Martin Brodeur – on paper. More realistically, a lost 2012-13 season may indeed spell the end of Brodeur being the undisputed No. 1 in net for New Jersey, even though he led his team to the 2012 Stanley Cup Final.

If 2012-13 was to go off without a hitch, there would be plenty of questions asking what Brodeur is capable of in net at the age of 40. His 2011-12 was mostly solid but he looked shaky at times, causing people to ask just how much he had left in him. If Brodeur misses an entire season, it's tough to imagine him being his old self in net at the age of 41 with a year's worth of rust built up on his body.

Brodeur will still be around after the lockout, but the old Brodeur we know may have played his last game if the work stoppage is significant.

Alfredsson's situation is similar to Teemu Selanne's. The Ottawa Senators captain may not have the following that Selanne has, but most would agree he plays his game with class. He has proven that he can still be extremely productive on the ice, scoring 27 goals in 75 games during the 2011-12 season.

Like many others, Alfredsson's contract expires after the 2012-13 season. The forward has stated that he still has a bit of gas left in the tank but Alfredsson, set to turn 40 in December, has got to be near the end of his career.

We'd expect Alfredsson to return after a lockout but it'd be a shame if a lengthy lockout robbed him of his final productive year(s). 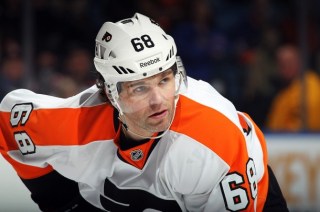 Again, this is a pretty obvious one. Love him or hate him, Jagr is an NHL legend. He might be lacking his iconic mullet these days, but Jagr still has a bit of talent left in him.

He returned to the NHL last season, controversially signing with the Philadelphia Flyers. Jagr was a step slower and his hands weren't quite as good as they used to be, but he proved he still has what it takes to compete in the NHL by scoring 54 points in 73 games.

This summer, Jagr's future became unclear once again. Some suggested he might retire, others suggested a new deal with Philadelphia was looming. Others even speculated Jagr might head to a different Eastern Conference team. Jagr went out and surprised everyone by signing with … Dallas? It still feels a bit strange writing that.

A lengthy lockout could cost us the joy of watching the Jagr experiment in Dallas, though we imagine it'll take a lot more than a lockout to close the book on our favorite mullet.

Whitney is another player that is signed beyond 2012-13. His deal won't expire until after the 2013-14 season meaning we'll still see plenty of this left winger unless the lockout takes on the shape of a monster and destroys every season in front of it.

That being said, Whitney is in the final stages of his career and it'd be disappointing to see one of those years wasted. Like Jagr, Whitney also took his talents to Big D, signing a two-year deal with the Stars after helping the Coyotes to an appearance in the Western Conference Finals. Who doesn't want to see Whitney, 40, skating in the same lineup as Jagr?

Rolston entered the lockout after a dismal 2011-12 season that he split between the Boston Bruins and the New York Islanders. In 70 games, Rolston tallied just seven goals and a total of 24 points. Questions emerged about whether Rolston could be productive for much longer in the NHL.

The lockout started without a new contract for Rolston, placing doubt over whether he will skate again in the NHL. His pace has slowed and his nose for offense has taken quite the tumble. If the league started on time, we imagine Rolston would have eventually been offered a one-year contract by a team needing veteran experience. Unfortunately, as we know, the year is in jeopardy and so too might be Rolston's career.

It's only fitting that we end this list with a player whose nickname holds no meaning for young hockey fans. The Bulin Wall's contract with the Edmonton Oilers expires at the end of the 2012-13 season and it's tough to envision a scenario where he receives a new multi-year deal.

Khabibulin will turn the ripe age of 40 in January and it's clear that his skills have been on a steady path downward the past few seasons. Considering Khabibulin's personality, it's safe to assume that he won't leave the NHL quietly. Given his experience, it's also safe to assume that some team out there would offer him a one-year deal to serve as the team's No. 2 in net.

We're not ready to see The Bulin Wall come down quite yet.