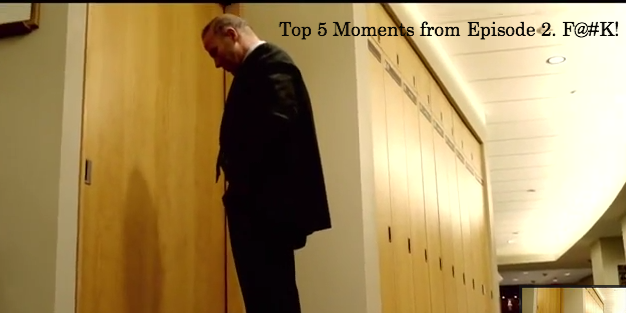 There is no question the first episode of 24/7 between the Wings/Leafs left us a little disappointed. After knocking it out of the park with the two previous installments, we thought maybe HBO lost its touch.

Oh boy were we wrong.

Episode two of this years installment was not just not better than last weeks it may be one of the best of the series all time. Maybe in episode 1 there was a feeling out process taking place, because in episode two we got to see what we've seen in previous years – and just a little bit more.

Check, this episode had an unofficial 41 F bombs floating around.

Almost too many good quotes to handle. This one was pretty awesome:

There is a different narrative to this 24/7 and HBO did a terrific job of spelling it out, especially in the final scene. Both teams are losing, struggling to find their game. These are two franchises with enormous expectations, and equally enormous pressure. You could cut the pressure with a chainsaw in this episode. It was heavy.

When we watched the movie Apollo 13, we were on the edge as we waited for the crew to return to earth. Even though we KNEW they had survived. That is the mark of a movie that is based off of a true story and that is also the mark of a documentary like this. We knew the Leafs and Wings both suffered bad loses last week, but somehow we were left wanting them to comeback as HBO documented two bad loses on the same night in a stunning final scene.

This was a four out of of five episode, and here are our five favorite moments

One thing about hockey players, they know how to drive in the snow. That's why it was so funny to watch Abdelkader and Smith react when a driver spins out during a storm in Detroit.

Abdelkader told Smith," looks like you on the ice."

You knew it was going to be a good episode when this was one of the first scenes. Kind of felt bad for Abdelkader though, he got knock out by a headshot during the game. Smith had to find a ride home.

Credit card roulette happens when NHL players go out to eat. They all put their credit cards in a hat. The last card in the hat pays the bill.

On this night, the Leafs are at a steakhouse in Pittsburgh. The bill is only $735 bucks. The loser in this game is Jerry D'Amico, one of the lower paid players on the team. Sucks even more that D'amico went on to get hurt in the next game.

In on of the best segments we got a look at the Leafs visiting the Penguins. The quotes were flowing.

We don't know what was better. Mike Leggo, the head official, telling both Dion Phaneuf and a Penguins player ," [ expletive) both you guys you're out," when giving them penalties or the great exchange between Phanuef and Crosby. Puck Daddy broke it down:

SID: “A guy runnin’ an elbow up through my head, that’s OK too, right?”

SID: “Kadri. [Expletive] dummy. Then he acts like he got shot.”

DION: “You [expletive] hit me from behind, Sid!”

SID: “I did not. C’mon, I don’t even hit anybody. I haven’t hit anybody [expletive] this year.”

SID: “Probably not, but you’d do it all night anyway.”

SID: “Yeah well Kadri is a [expletive] joke. You tell’em.”

The Leafs listen to Miley Cyrus after a big win

The Leafs defeated the Blackhawks, so they were celebrating. As Joffery Lupul says, " You really can't imagine 22 guys listening to Miley Cyrus."

Before the show aired, HNIC reported that HBO cameras had been kicked out of both locker rooms. Turned out it wasn't as bad as it sounded. In fact, it only added to the masterpiece of a final segment. In the last ten minutes we saw both teams getting crushed at home ( Wings lost 5-2, Leafs lost 3-1)

Mike Babcock stormed into the locker room during intermission and looked like a celebrity chasing the paparazzi away:

Not sure what Babcock said, but it made it look worse by kicking the cameras out.

Caryle apparently kicked the cameras out too, but we heard his rants and it was brutal. Overall, like we said, the final ten minutes may have been the best ever of the entire series.

— A scene that may capture some attention in Toronto James Reimer didn't exactly seemed to be thrilled that he wasn't playing in Pittsburgh. Instead Jonathan Bernier got the start. While both goalies said there is no issue, seems there is some tension. Over dinner Peter Holland was making small talk with Reimer, and said something about Reimer starting and playing well. Reimer commented that he'll be "watching well." Holland tried to back out of the convo. Check out the look on his face:

— Good scenes with Mike Babcock in this one too. Can really see what makes him a good coach.