These are the five coaches we think deserve consideration for the Jack Adams award.  Coaching is important, whether some people like to admit it or not, and these coaches have done a really good job steering their ships this season.

If the Red Wings make the playoffs, the Jack Adams Award has to go to Babcock.  The Red Wings have been devastated by injuries all season long and are still in a position to make the playoffs.  Their two best players, Zetterberg and Datsyuk, have both missed half the season. Babcock has been able to get a lot out of a team with a ton of young players, especially Danny DeKeyser and Gustav Nyquist.  It’s hard to say this is Babcock’s finest coaching job given that he has had so much success in the NHL, plus the Olympics.  But this has to rank right up there. 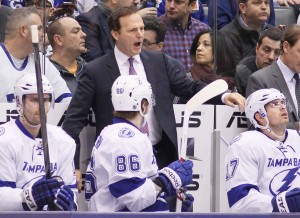 Cooper had a ton of success in the AHL before being hired as the replacement to Guy Boucher in Tampa Bay.  His young group has developed with him and the results have been a team that is going to be a tough out in the playoffs.  Losing Steven Stamkos early in the season was Cooper’s first real test and he passed with a 22-18-5 record while he was out.  The Lightning also lost Captain Martin St. Louis after he asked for a trade.  The Lightning keep moving on regardless of who’s there and Cooper deserves the credit for that. 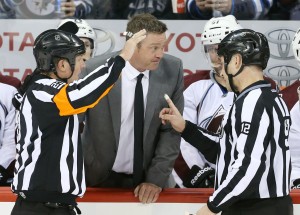 Nothing set the tone for the NHL season this year quite like Patrick Roy going ballistic on the bench in his opening game against Bruce Boudreau and the Ducks.  It could’ve been read as Roy being a psycho but after looking at what has happened this season, Roy was just showing he meant business.  Roy’s first season is reminiscent of Michel Therrien’s first full season with the Penguins.  Going from one of the worst teams in the league, to one of the best.  He walked into a pretty good situation with so much young talent in Colorado, including first overall pick, Nathan Mackinnon.  He helped Semyon Varlamov move forward after a subpar season last year and an early season controversy.  It should be no surprise that Roy has been a success in the NHL.  He, unlike many star players who want to coach, paid his dues before coaching an NHL team. 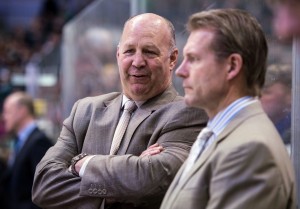 After losing in sickening fashion to the Blackhawks in the Stanley Cup Finals, the Bruins have bounced back and have been arguably the best team in the league.  They haven’t had to deal with massive injuries like some other teams but they have been consistent for most of the season.  The Bruins have an identity and that starts with the coach of this team.  They are tough to play against and stifling defensively.  They are also best in the league 5-on-5.  Expectations and pressure can sometimes cause teams to wilt but Julien has been a steady hand since he’s been with the Bruins. 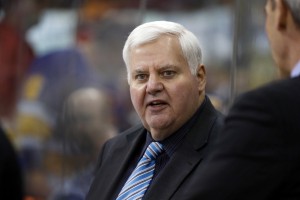 Along with Doug Armstrong, Hitchcock has created a team that is similar to the championship team that he coached in Dallas.  They are gritty and put preference on defending over scoring goals.  That hasn’t stopped them from being one of the top goal scoring teams in the league.  Like Julien and Boston, St. Louis has an identity and know the way they want to play.  The way this team plays defense is something to watch.  With the acquisition of Ryan Miller, the Blues are that much closer to realizing their dream of delivering St. Louis its first Stanley Cup.  Hitchcock is a big reason why if that happens.

Double B has the Ducks in a prime playoff spot, and a franchise record 49 wins.

Ruff has the Stars hanging around a playoff spot. He has turned Tyler Seguin’s career around