Just when you thought Target made the biggest merchandise blunder by naming the LA Kings the champions of the Eastern Conference, Reebok leaves a rather important name off of this LA Kings Stanley Cup Final t-shirt.

Via Reddit, Justin Williams is missing from this roster: 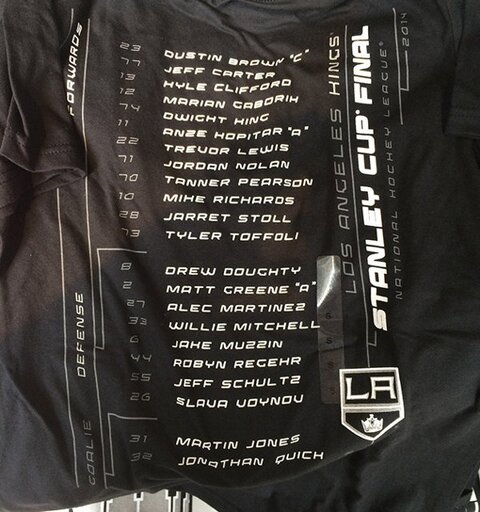 It looks like someone forgot to double check the group of forwards. That job is pretty easy considering they could have just counted LA’s forwards here and realized someone was missing.

Williams’ exclusion is hilariously bad. Williams, or Mr. Game 7, was one of the main reasons the Kings made it to the Cup Final. He has 24 points in 24 games (eight goals and 16 assists) heading into Game 4 against the Rangers. He’s second on the team in points in the playoffs, trailing Anze Kopitar by two. He’s a clear MVP candidate for the Kings in their quest for the Cup.

Of course, this blunder may not be that big of a deal. How many people do you know would actually buy a shirt recognizing their team making the final? Probably not many. The Kings should be rolling out some new Stanley Cup Champions gear in the near future, so this flawed piece of gear will be quickly forgotten.