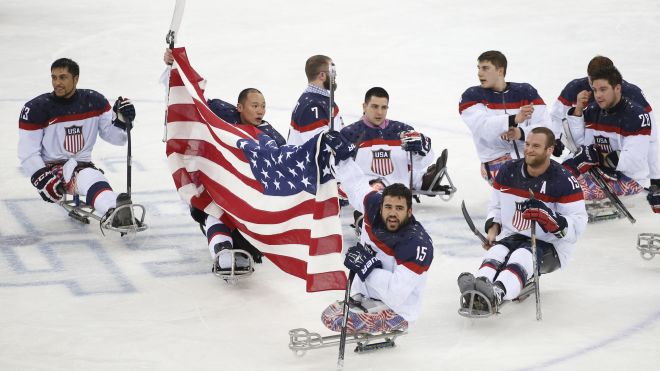 For the better part of February, hockey fans across America were glued to their televisions as NHL players came together in pursuit of a gold medal at the 2014 Winter Olympics in Sochi, Russia.

In many respects, they were lauded as heroes. None more than T.J. Oshie after his memorable shootout performance in Team USA's preliminary round win over Russia. Oshie famously declined the hero moniker, reminding everyone that he was merely a hockey player. "The real heroes wear camo," he said.

Just a few weeks later, the very same ice on which Oshie starred became the place where some of those heroes traded in their camoflague for the red, white and blue.

The Paralympic games, always a source of incredible inspiration, were punctuated today by the sled hockey gold medal game between host nation Russia and the United States. Russia, who hardly had a sled hockey program at all just a few years ago, upset the defending gold-medalists in the preliminary round. In the sled hockey community, it was as big an upset as you could imagine. I'll spare you the indirect Miracle on Ice reference. You get it.

However, it was the Americans who got the last laugh, earning their second straight gold with a 1-0 victory. It was a victory both on the ice and off for the sport, as the tournament was broadcast by NBC to a national audience for the very first time.

Many of those hockey fans who were enamored with Team USA a month ago tuned in, myself included. While watching and learning more about the roster, which has players ranging in age from 15 to 35 and includes a number of former and current military members, hockey became less and less of the reason we watched.

I could've changed the channel to check out an NHL game. I stuck with NBC's coverage. I was fixated on these heroes. These people have faced more adversity than most of us could ever comprehend. Instead of letting it define them, they've risen above it. They've conquered it.

The stories of American players like Rico Roman, Josh Sweeney and many others were portrayed in a heart-wrenching documentary released late in February, affording fans a rare insight into what this game means to these players. Sweeney, the only goal scorer in the gold-medal game, is one of 18 American military members competing at the Paralympic Games. He earned the Purple Heart in 2009 after an injury suffered from an improvised explosive device cost him his legs.

But Sweeney, who grew up playing hockey, pressed on. Now he's a gold medalist. Roman, like Sweeney, was also injured by an IED while serving in the military. Here's his story:

Sled hockey is not a sport that many people are aware of. In fact, NBC play-by-play man Dave Strader even admitted the first two games he'd seen in full were in the semifinal round of this tournament, where Russia defeated Norway and the US got past Canada. Nonetheless, it's a sport that's growing both in participants and awareness. Today's game was a great vehicle for that.

Very few people deserve the recognition more. Besides, that gold around their necks is a much better look for these guys than camoflague anyway.