In our weekly NHL Analytics Power Rankings at Puck Drunk Love, we see which teams are the best based on puck possession, zone time, goal differential and luck.

However some teams like the Toronto Maple Leafs and Anaheim Ducks defy these rankings and despite poor analytics they continue to win games. How are they able to have success in today’s NHL despite not having the puck as much and spending more time in their own zone?

Which numbers should I look for?

If teams are able to consistently keep the for or against in the top five or so in the NHL, they generally can sustain success for a limited amount of time. Perhaps even over the course of an entire NHL season.

How does this make a team more susceptible to prolonged slumps?

If a team is able to have a lower amount of shots against, even if they are consistently being out shot, they generally will allow fewer goals simply based on percentages. The same theory works for a team that ranks near the top of the league in shots for per game.

The poster child for riding shooting percentage has become the Toronto Maple Leafs. Their average ranking in the analytics power rankings has been 24th this season and it was 28th during 2013-14. However they currently rank 11th overall in the NHL standings. 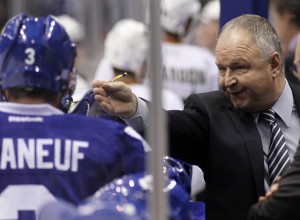 Since the Leafs are consistently being out shot by five shots per game, they must have a much higher shooting percentage and receive good goaltending in order to win. When their snipers fail them the whole team fails.

While a better analytic team like Detroit can go through prolonged scoring slumps with lower shooting percentages and still come away with wins, the Leafs cannot. The Red Wings win because they consistently control 53% of the play and out shoot their opponents by three shots per game, so their shooting and save percentage have a margin for error.

Which teams rely the most on their offensive percentages as opposed to a solid puck possession game?

This is determined by adding goals for and shots for per 60 minutes along with shooting percentage. Once we rank the teams accordingly to this metric we then compare that to their analytic ranking. The higher a team is ranked based on their offense instead of their analytics means they would be very susceptible to having long streaks at random.

The teams most dependent on their offense are the Toronto Maple Leafs, Dallas Stars, Minnesota Wild, Vancouver Canucks and Colorado Avalanche.

Keep in mind that just because a team does not rely on offensive percentage it does not make them a better team. The Devils and Coyotes are simply bad teams.

What does this help me with moving forward?

Essentially, look for the Leafs, Stars, Wild, Canucks and Avalanche to all go through longer hot streaks and cold streaks throughout the season. If any of them are hot at the right time they may make the post season. However, if you are a betting person, I would stay away from these types of teams.

While you can expect the Red Wings, Jets and Capitals to maintain a consistent level of play and they should be good bets to make the post season in light of their current standings.

Unfortunately for Devils and Coyotes fans you can expect a long second half of the season and to be in the McDavid/Eichel sweepstakes.