While the California based teams have dominated the headlines in this division in years past, multiple teams are trying to dethrone them. The first team on the list is no stranger to the depths of the Pacific Division and are looking to improve immensely.

5. Will the Oilers challenge the other contenders within the division? 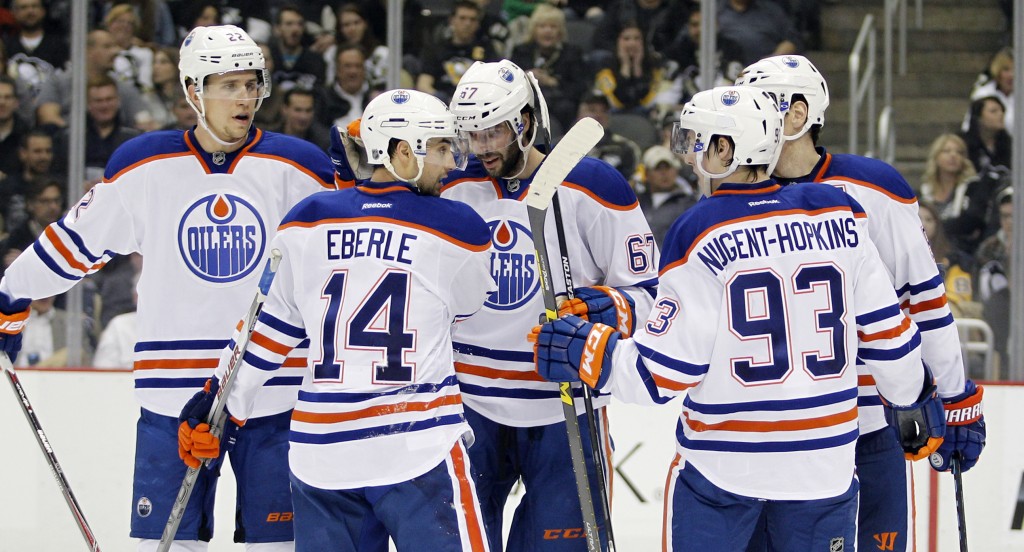 PITTSBURGH, PA – MARCH 12: Jordan Eberle #14 of the Edmonton Oilers celebrates his second period goal against the Pittsburgh Penguins during the game at Consol Energy Center on March 12, 2015 in Pittsburgh, Pennsylvania. (Photo by Justin K. Aller/Getty Images)

When you add a generational player such as Connor McDavid to your lineup you will undoubtedly get better. That is a fact. It is especially helpful when it places a lot of the team in their proper spots. Ryan Nugent-Hopkins playing as a second line center is a scary proposition. Allowing each player to assume a natural role will do wonders. It will be much needed relief to a team that has continued going through the motions but didn’t know how to progress after years in the basement of the division. Who other than RNH stands to grow the most this year? Nail Yakupov and Taylor Hall look to be the two players that will benefit the most as Hall will be playing with a world class player and Yakupov will be able to play on either the second or third line without too much pressure.

The defense continues to be a sore spot but with the addition of Andrej Sekera they should be able to play a steady game after looking for a genuine number one defensemen for many seasons. The depth is much improved and that will provide much needed relief. Names like Letestu and Klinkhammer will become unsung heroes in short order. It will all center around goaltending – where Ben Scrivens and Cam Talbot go, so will the Oilers.

4. Do the Flames have the best defense in hockey? 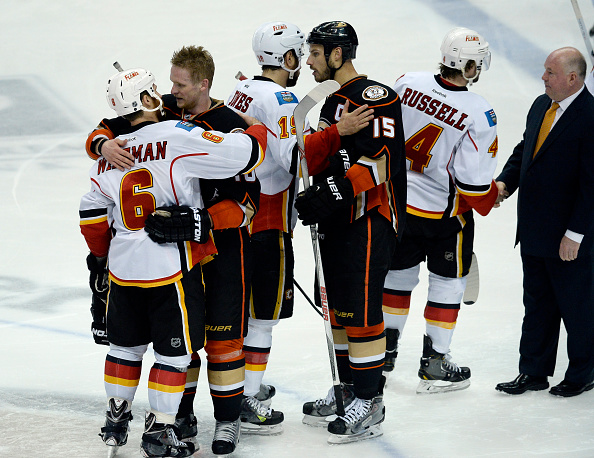 ANAHEIM, CA – MAY 10: Corey Perry #10 of the Anaheim Ducks, who scored the game-winning goal in overtime, hugs Dennis Wideman #6 of the Calgary Flames as David Jones #19 and Kris Russell #4 of the Flames shake hands with Ryan Getzlaf #5 and head coach Bruce Boudreau of the Ducks after Game Five of the Western Conference Semifinals during the 2015 Stanley Cup Playoffs at Honda Center on May 10, 2015 in Anaheim, California. The Flames were eliminated in overtime, 3-2. (Photo by Kevork Djansezian/Getty Images)

No, but it’s pretty damn close.

They may have the best top-three defensemen in the league when you break down what they have in TJ Brodie, Dougie Hamilton and Mark Giordano. Giordano was well on his way to winning the Norris last year before injuries stood in his way. He was rewarded with a shiny new contract that will last until he is 38. While Giordano is the Corvette of the bunch, you have Brodie who is more of the Camaro. He is great in his own right but only slightly behind Giordano. After another stellar season and the contract he was just awarded, Brodie will soon become a household name as he grows into his game. Hamilton meanwhile had a bunch of drama around him this offseason as he was embroiled in a contract dispute with the Bruins who ended up trading him for picks – a puzzling move to say the least. This doesn’t even begin to mention the likes of Kris Russell, Dennis Wideman and Ladislav Smid, a core that should help them return to the playoffs.

3. What the hell are the Vancouver Canucks doing? 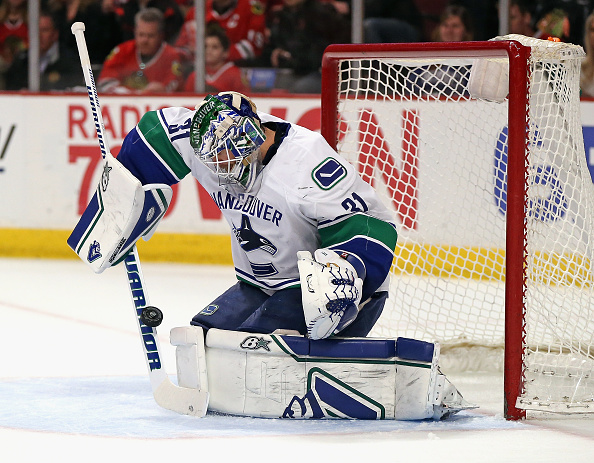 CHICAGO, IL – APRIL 02: Eddie Lack #31 of the Vancouver Canucks makes a save against the Chicago Blackhawks at the United Center on April 2, 2015 in Chicago, Illinois. The Blackhawks defeated the Canucks 3-1. (Photo by Jonathan Daniel/Getty Images)

It has been an odd time in British Columbia as Canucks fans have seen their team make perplexing move after perplexing move. It all began with multi-year deals with Derek Dorsett and Lucas Sbisa, a pair of replacement level players that were given deals that were nowhere near fair value. Then the trade for Brandon Sutter took place as the team dealt away multiple players for a player who at best is a third line center. Earlier in the offseason as well during a meeting with fans Jim Benning spoke about the Eddie Lack trade which drew the ire of many fans, who loved Lack and viewed him as the goalie of the future.

So what can they do to improve?

Well the first move would be to hold their breath and hope that the Sedin’s will carry them back to the postseason as the team hasn’t demonstrably improved in anyway this offseason. The Pacific division arms race is tough but it looks like the Canucks are caught between being a contender and a pretender.

2. How long is the Anaheim Ducks’ championship window? 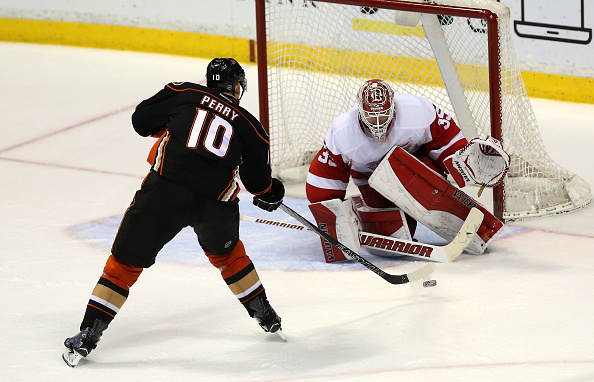 ANAHEIM, CA – FEBRUARY 23: Corey Perry #10 of the Anaheim Ducks shoots and scores in the shootout against goalie Jimmy Howard #35 of the Detroit Red Wings at Honda Center on February 23, 2015 in Anaheim, California. The Ducks won 4-3 in a shootout. (Photo by Stephen Dunn/Getty Images)

The Ducks have been one of the most consistent teams in the NHL the past 10 or so years. Why? Mostly due to stability but it is also due to great managing on the part of Bob Murray and others. Recently Murray has known when to move players on their decline and fetch in return solid, young players that he can plug into the lineup. Extending core players like Ryan Getzlaf and Corey Perry were musts but the continuous goalie carousel has been a boon for the team. Smart spending has allowed the team to be beneath the salary cap and allowed the team to pick up rentals on short notice. Theoretically if they keep it up, their championship window doesn’t have to end but the real key is whether or not they will get the same steady management year in and year out.

1. Will the Los Angeles Kings return to the hockey elite? 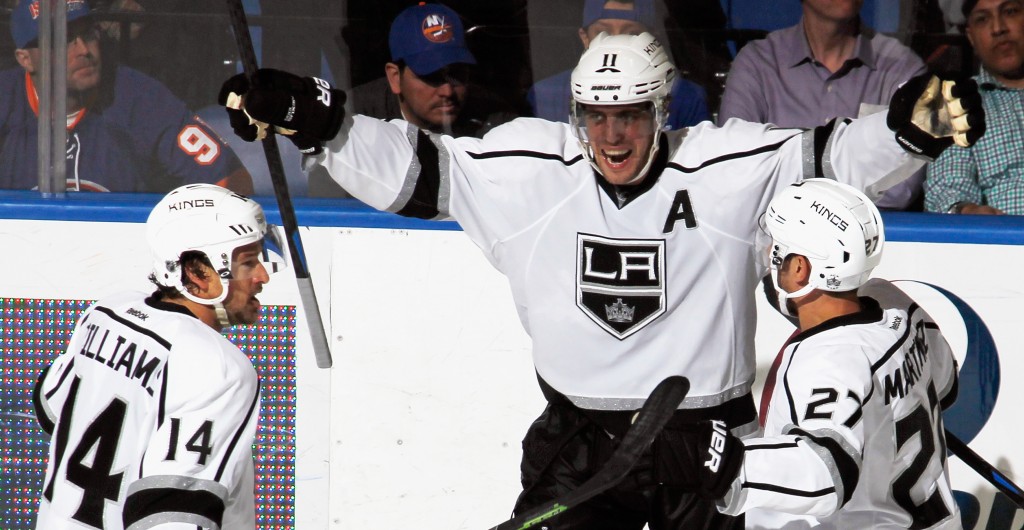 UNIONDALE, NY – MARCH 26: Anze Kopitar #11 of the Los Angeles Kings celebrates his game winning goal at 15:37 of the third period against the New York Islanders at the Nassau Veterans Memorial Coliseum on March 26, 2015 in Uniondale, New York. The Kings defeated the Islanders 3-2. (Photo by Bruce Bennett/Getty Images)

Elite. The word gets tossed around an awful lot but do the Kings of young and old even fit under that description?

They won the Stanley Cup when they were the eighth seed and won another not even being the champion of the division. So, the term elite may not fit but they also have won two Stanley Cups within the past four years. They sure as hell didn’t want to stand pat this time around as they picked up Milan Lucic via trade from the Bruins and recently signed Christian Ehrhoff on a one-year contract. The team is caught in the middle as they want to still contend but they also don’t want to hand the team off to the young players just yet. The Tanner Pearson’s and Tyler Toffoli’s of the world won’t get the opportunity to take over the team but that shouldn’t be a problem as Jeff Carter and Marian Gaborik, their aging stars, continue to perform. That is a very big IF to consider. The Kings believe it is a risk worth taking.