In the realm of hockey statistics CORSI (shot attempts) has become akin to an old coat that is comfortable but beginning to wear down to the point of replacement. This method of measuring possession has been around for quite some time and is becoming somewhat dated. It is great that we have a way to tell which players have better possession ratings, but what creates possession? Isn’t knowing that answer the true value of measuring shot attempts? The player that gets the puck for their team consistently more than they give it away would have a big individual contribution to CORSI or shot attempts.

How do we measure this? If we simply look at giveaway to takeaway differentials per 60 minutes at the individual player level we can make some assumptions. Granted giveaways and takeaways can be subjective based on the rink they are counted in so their is a margin of error involved in using these statistics.

Pictured below are the top 20 players (minimum of 100 games played) since the 2011-12 NHL season in terms of takeaway differential per 60 minutes. These players are valuable as they create possession for their teams. Looking at this list I can spot six “top six” forwards in Ryan O’Reilly, Marian Hossa, Pavel Datsyuk, Jaden Schwartz, Patric Hornqvist and Michael Grabner. 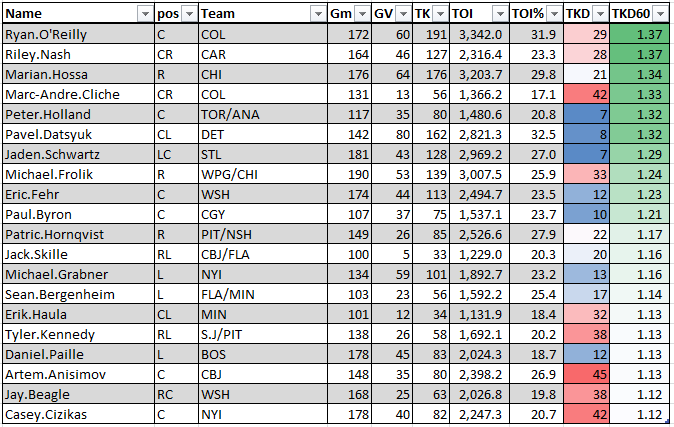 It is interesting to note that no defenders are in the top 20. The closest a defender with more than 100 games played to the top was Andrej Sekera at a 0.25 takeaway differential per 60 minutes. By nature of the position, defenders are not aggressively pursuing the puck carrier all the way up the ice. They are generally limited to aggressive attacking in the defensive and neutral zones. This just shows another reason why Ryan O’Reilly is so valued around the league and why the Colorado Avalanche are trying to patch up their relationship to keep him in their jersey.

Both Marian Hossa and Pavel Datsyuk have long been known to be elite possession players, however two young players of note on this list are Jaden Schwartz of the St. Louis Blues and Casey Cizikas of the New York Islanders. Both are becoming integral components of their teams’ success. Looks for both to play big role in the post season this year.