The Carolina Hurricanes have solidified their goaltending situation for the next few years, announcing they’ve signed Eddie Lack to a two-year extension worth $5.5 million. Lack, who was set to become a free agent at the end of the 2015-16 season, will now be controlled by the Hurricanes until 2018.

The Hurricanes scored one of the best deals this offseason, bringing Lack to Carolina from Vancouver at such a minuscule cost of a 3rd and 7th round pick, and I’ve previously proclaimed he’s got the talent to handle being a starter in the NHL. The Hurricanes are taking a reasonable gamble on Lack, and if it doesn’t work out, the deal isn’t crippling.

Cam Ward will be the starting goaltender when the season opens up, as head coach Bill Peters announced, but there’s no doubt Lack will be the 1B goalie who will eventually push Ward into a new role or team.

He’s dealt with injuries that were partly due to being overplayed earlier in his career, and over the last three seasons (2012-15) he’s had poor results for a starting goalie, with a 91.50 even strength save percentage and a 2.39 goals against per sixty minutes to match. Compare that to the three seasons before that, from 2008-2011, and it’s a different story. Ward’s got a 92.77 5v5 Sv% and a 2.24 GA/60. Obviously there are variables, like age, but he’s been declining for three seasons now and isn’t the same goalie he once was. 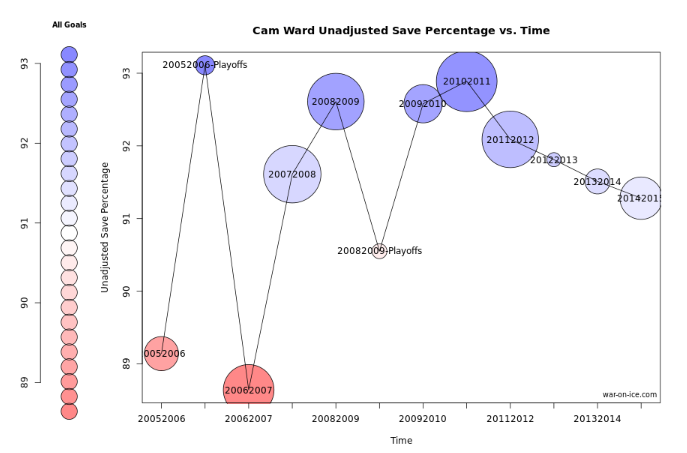 By starting Ward, what Carolina might be doing is trying to rebuild his value. He is a UFA at the end of the year, and trading him would be much easier midseason than it would be this time last year. Let’s say he has a bounce back first half and posts average-to-above-average numbers? With his playoff experience (even though that was so long ago) a team might bite at the chance to acquire him. It’s not a bad proposition should the Hurricanes have a down season and start a fire sale.

The Hurricanes might feel they owe Ward the chance to start, he’s been their goalie for so long and brought the team their first Stanley Cup, but being realistic, he’s not the goalie he once was and shouldn’t be owed anything.

Lack, 27, on the otherhand, is still relatively young and coming off the best season of his career. He played with a similar goalie in Vancouver, as Ryan Miller was in the midst of a decline and showed he can handle full-time duty in 2014-15.

Either way, the Hurricanes have a tough decision on their hands. Ward has been one of the faces of the franchise for about a decade, so giving him a decreased role won’t be easy. What’s clear is Carolina has made its choice, seemingly the right one about Lack, who should give the Hurricanes the number one goalie they desperately need even if he doesn’t start right get-go.