A relatively new area that we have statistics to analyze is Scoring Chances as provided by WAR on Ice. How do they define a scoring chance? I will let their own blog speak 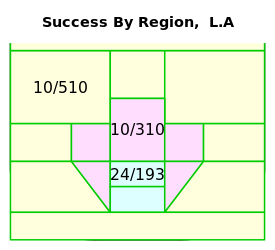 for itself on this subject. At a high level the definition of a Scoring Chance depends on the location and type of shot. WAR on Ice has developed the following danger zones with varying degrees of success for NHL shooters.

In the green area the shooting percentage is roughly 12.4%, then it moves to 3.2% in the red zone and 1.9% in the yellow zone. Clearly there is a direct correlation to goal scoring ability and these danger zones. When these zones are further combined with the WAR on Ice definition of a scoring chance you get a very clear picture of which teams are getting the ever elusive higher quality shots.

This data is available at the team level as well as the individual player level and it is broken down in a number of ways. But which players are contributing the most to scoring chances for their teams? The iSC statistic provides the amount of scoring  chances that individual player has had. While the SCF%Rel shows how the players overall scoring chances for as opposed to against while they are on the ice rank among their teammates.

For a single number to show how valuable a player is to their teams scoring chance generation I have crudely combined these two statistics to create SCc (Scoring Chance Contribution). The first team we will look at based on this metric is the Boston Bruins. I have split the comparisons separately for defense and forwards due to the different nature of the positions.

Here is another metric that shows just how valuable Patrice Bergeron is to the Boston Bruins. In just 18 games this season David Pastrnak is showing that he not only belongs in the NHL but he deserves more playing time. Both Milan Lucic and David Krejci score lower by this number and the fact that their team has a higher percentage of scoring chances for when they are not on the ice largely plays into this.

The Bruins can take solace in the fact that a couple of their younger defenders in Zach Trotman and Matt Bartowski are leading their blue line in Scoring Chance Contribution. More so with defenders than forwards the quality of competition will naturally affect their ability to create scoring chances. Once a stalwart of the Bruins defense core it appears that age may have finally caught up to Dennis Seidenberg. It may be time for Boston to move on from him and reinvest the cap money elsewhere.

Why are Scoring Chances an important statistic?

Based on investigation done by WAR on Ice it has been shown that Scoring Chances better predict future Goals For percentages than shot attempts (otherwise known as Corsi). Goals naturally lead to wins so the best statistics are always the ones that can give us the most insight into goal scoring. At the end of the day the only number that matters is the final score. Any modern hockey statistic that can help predict this is of great value.