Largest change in power ranking from last week: The Columbus Blue Jackets showed some life this past week and surged up four spots, while the Colorado Avalanche fell back to earth dropping five spots. The battle at the top of the rankings is still among the Lightning, Predators, Blackhawks, Red Wings and Islanders.

Teams currently outside the playoffs based on points but in the top 16 in the rankings: Los Angeles Kings, Florida Panthers, Minnesota Wild and Dallas Stars. The most likely of these two to grab a playoff spot would be the Kings and Stars based on he number of Western Conference teams in the playoffs but outside the top 16 in the analytics rankings. 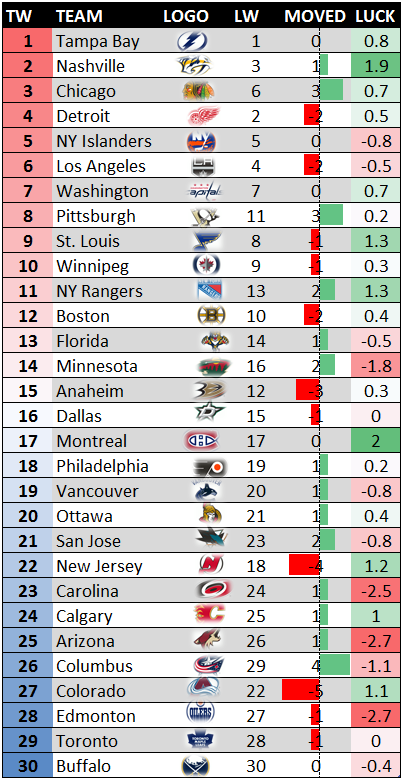 Teams currently in the playoffs based on points but outside of the top 16 in the rankings: Montreal Canadiens, San Jose Sharks, Vancouver Canucks and Calgary Flames. With Vancouver and Calgary barely holding onto their playoff positions I cannot see them lasting to the end of the season in those spots.

Both the Canucks (48.6%) and Flames (45.8%) rely on their goaltending heavily as they are both under 50% scoring chances for. While the Stars (51.8%) and Kings (52.1%) are both getting the majority of the scoring chances for in front of their goaltenders. At some point if the Canucks and Flames have their goalies go through a slump they will slide back out of a playoff spot and create an opening for Los Angeles and Dallas.

Not all teams ranked lower in analytics are there because of puck luck. As discussed here, it can have a great deal to do with the quality of possession they have for or against. Of the teams much lower in analytics than the standings it appears the Ducks, Flames, Canadiens  and Sharks are all ranked near the top of the league in terms of limiting quality scoring chances against.
However Calgary and Montreal are both in the bottom  half of the league in terms of their quality of possession for. If both hold on to their current playoff positions I would expect them to be less of a threat once the post season rolls around.