We have made a change to these rankings starting this week. Moving forward instead of basing the rankings on the entire season we will base them solely on the last week. This will show which teams are trending up and down based on the past weeks’ play.

The Pittsburgh Penguins are riding their top guns in Evgeni Malkin and Sidney Crosby to first place on the rankings this week. Much has been made about the Penguins not fitting the part of a Stanley Cup contender this season. I would expect that despite a solid showing last week General Manager Jim Rutherford will be out looking for help at the trade deadline to improve his depth even after his trade for Daniel Winnik.

The Los Angeles Kings, Florida Panthers and Philadelphia Flyers are all in the thick of the race for third in their divisions or looking to grab a wild card spot. All three suffered from poor on ice shooting and save percentages this week. This could not come at a worse time of the season. 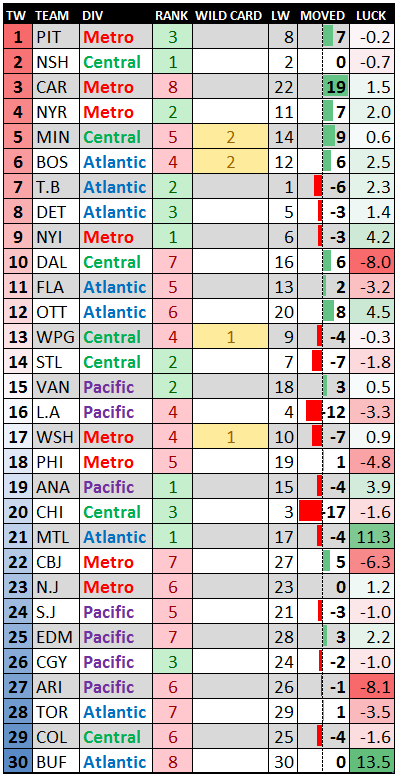 On the other end of the spectrum the Boston Bruins were happy to have favorable percentages over the course of the week. The largest contributor to this was their goaltending stopping 94.9 percent of the shots against last week. This helped them to leap into the second wild card spot in the Eastern Conference.

In an interesting turn of events the Buffalo Sabres and the Montreal Canadiens lead the NHL in puck luck (on ice shooting and save percentage) last week. The Sabres shot at a 20% clip and had tremendous goaltending leading to a 93.5 save percentage. While the Canadiens continued to count on Carey Price’s stellar season with a 94.6 save percentage to go along with a 16.7 shooting percentage.

One can see why the Chicago Blackhawks have been so active on the trade market thus far. They are trending downwards in 20th spot based on their performance last week. However the acquisition of Kimmo Timonen, assuming he is healthy enough to play lion’s share of the games going forward, should help to boost them back up to where we expect to see them.

The San Jose Sharks continue to muddle in the later section of the rankings and are in great danger of missing the playoffs for the first time in many years.

Thanks to WAR On Ice for these statistics.