We have made a change to these rankings starting this week. Moving forward instead of basing the rankings on the entire season we will base them solely on the last week. This will show which teams are trending up and down based on the past weeks’ play.

In terms of large swings from last week among playoff teams the Tampa Bay Lightning, Winnipeg Jets and New York Rangers all moved over 20 spots. For the Jets and Lightning these were positive moves, while the Rangers had a week to forget.

The Winnipeg Jets had a great week controlling play with 57% shot attempts for, 57% offensive zone starts and 56% scoring chances for. Unfortunately for the Jets their low shooting percentage of 6% and 0.917 save percentage did not help them make up ground and they are currently sitting in the second wild card spot in the Western Conference. 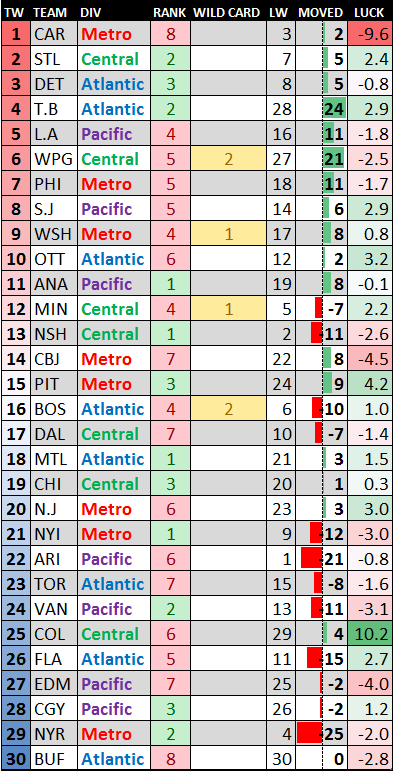 For the Tampa Bay Lightning they had 53% shot attempts for to go along with 59% offensive zone starts. Their 8.5 shooting percentage and 0.944 save percentage was near the tops in the league which kept them in a fight with the Montreal Canadiens for first place in the Atlantic Division.

The Boston Bruins are in a dog fight to hold onto a wild card spot in the Eastern Conference playoff race. They have been very much relying on their goaltending to push them into the playoffs. With a 0.949 save percentage last week they did not disappoint. The Bruins need to find a way to spark their offense and take some pressure off their goaltenders. If not they may not have enough left in the tank to get past the first round of the post season.

The Western Conference has long feared the awakening of the Los Angeles Kings and during their three games this past week we saw the beginnings of that. They controlled 54% of the shot attempts, 53% of the offensive zone faceoffs and 58% of the scoring chances. The Kings are starting to ramp up for the post season and look to knock one of the Minnesota Wild or the Winnipeg Jets out of the post season wild card spots. If I were the Anaheim Ducks or Nashville Predators I would not want to face the Kings in the first round.

Thanks to WAR On Ice for these statistics.