There will be thousands of NHL Trade Deadline Day recaps to read today, so why should you read this one? Without bias, based on the numbers we will show you which teams won each trade based on Scoring Chance Contribution and the chances of a draft pick turning into an NHL player. The Scoring Chance Contribution statistic was introduced recently at Puck Drunk Love and is calculated based on data from WAR On Ice. In order to determine the likelihood of a draft pick becoming an NHL player we have used Travis Yost of TSN.ca’s research to assign values.

The end result is an easy to understand winner of each trade based on the net scoring chances contributed and the likelihood of the draft picks swapped turning into NHL players. We will start by breaking down each trade and showing who won and lost the trade. For the purposes of this article we have gone back to February 24, 2015 as this is when the trades started to pick up prior to the deadline.

The numbers are unbiased and some of the players that are thought traditionally to be good deadline pick ups such as Antoine Vermette and Max Talbot do not stack up well in terms of Scoring Chance Contribution. Here are the individual deal winners from the trade deadline this year. 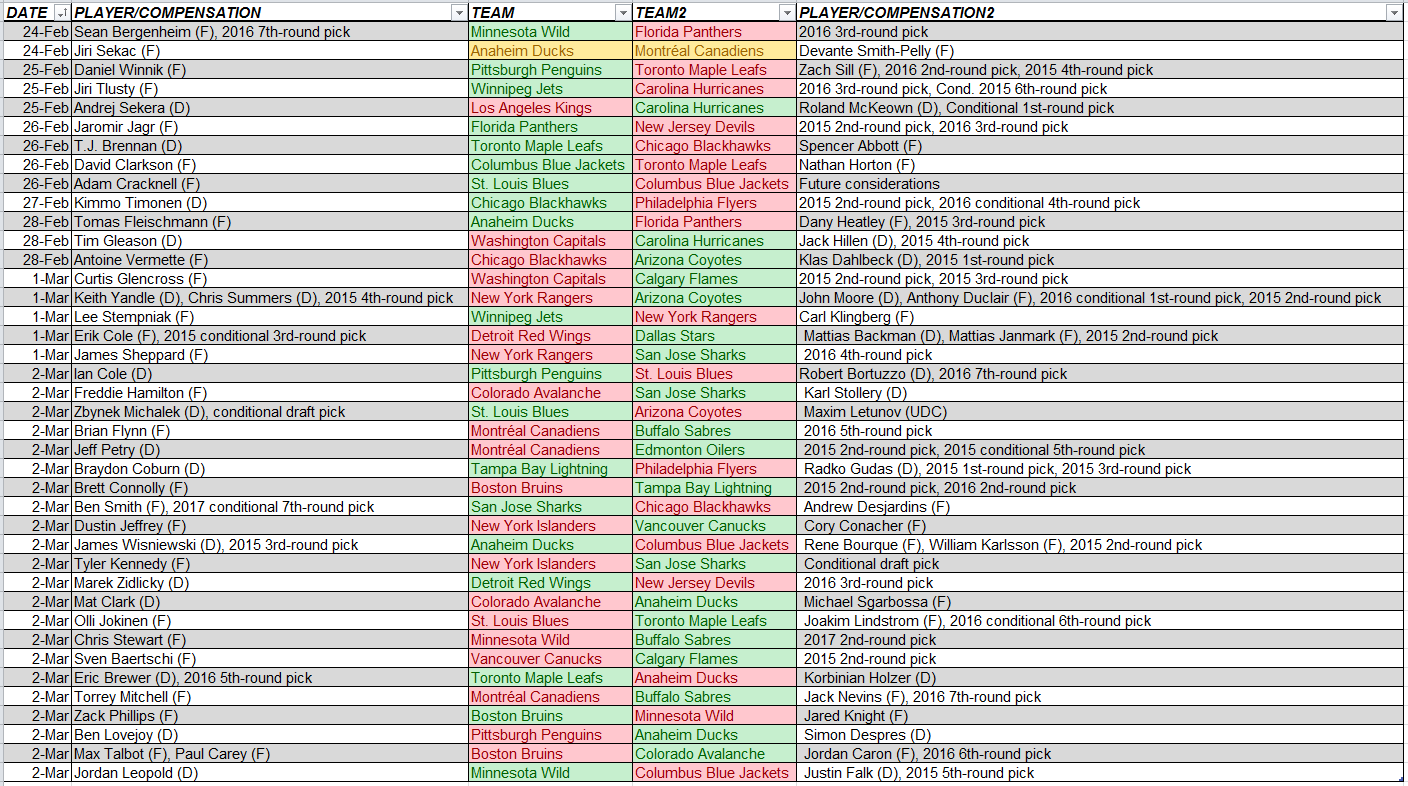 Teams in green won the trade, red lost and yellow indicates a trade of equal value to both teams. Now we know which teams won each individual trade, but what about overall. Which team won the 2015 NHL Trade Deadline? Let’s take a look at the chart below which details the net result of a teams trades based on Scoring Chance Contribution and the draft picks received.

Now we know which teams won each individual trade, but what about overall. Which team won the 2015 NHL Trade Deadline? Let’s take a look at the chart below which details the net result of a teams trades based on Scoring Chance Contribution and the draft picks received. 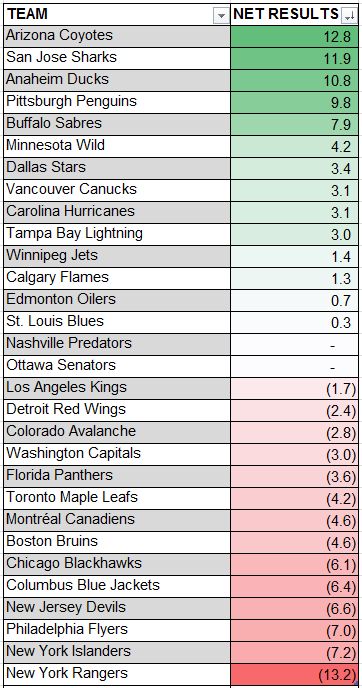 The clear winners of the deadline in terms of teams destined for the playoffs are the Anaheim Ducks and Pittsburgh Penguins. While the team fighting for the playoffs that helped themselves the most was the San Jose Sharks. Let’s take a look at each of these teams individually and what they brought in versus what they shipped out.

Notes: The Ducks best acquisitions were Wisniewski and Simon Despres. There are many out there that do not believe Wisniewski is a good NHL defender, however he has a positive scoring chance contribution and provides value in that way.

Notes: The Penguins best deal was acquiring Daniel Winnik with Zach Sill going the other way. This was also the most impactful deal of the entire trade deadline this season. It just goes to show that even the smallest of moves can have a huge impact.

Notes: Believe it or not the acquisitions of Smith and Stollery greatly improved their overall scoring chance contribution. Both Kennedy and Sheppard were a drain on the Sharks scoring chances.

The absolute winner of the 2015 NHL Trade Deadline were the Arizona Coyotes who gave themselves a great head start on their rebuild.

Notes: Once again, contrary to popular belief the Coyotes may have actually gotten better when they traded Yandle and Vermette. With the combination of prospects and draft picks coming the other way general manager Don Maloney has set them up well moving forward.

A couple playoff bound teams that did not do themselves any favors were the Chicago Blackhawks and the New York Islanders. Let’s take a look at their deadline moves.

Notes: The Blackhawks did very well in acquiring Timonen, but it was their other moves that brought them down. The acquisition of Timonen was the only trade they won.

Notes: While the Islanders really didn’t do much, the two players they brought in are both well in the negatives in terms of scoring chance contribution.

The team with the worst trade deadline this season was the New York Rangers, let’s take a look at what they did.

Notes: Based on the combination of scoring chance contributions and draft picks the Rangers lost every trade they made. Granted Yandle may perform better on a team headed to the playoffs, but overall the Rangers gave up a lot of futures for not much immediate help.

Below is the full chart of each trade and their net affects for Scoring Chances Contributed and the likelihood that the team will get an NHL player out of the draft picks acquired. 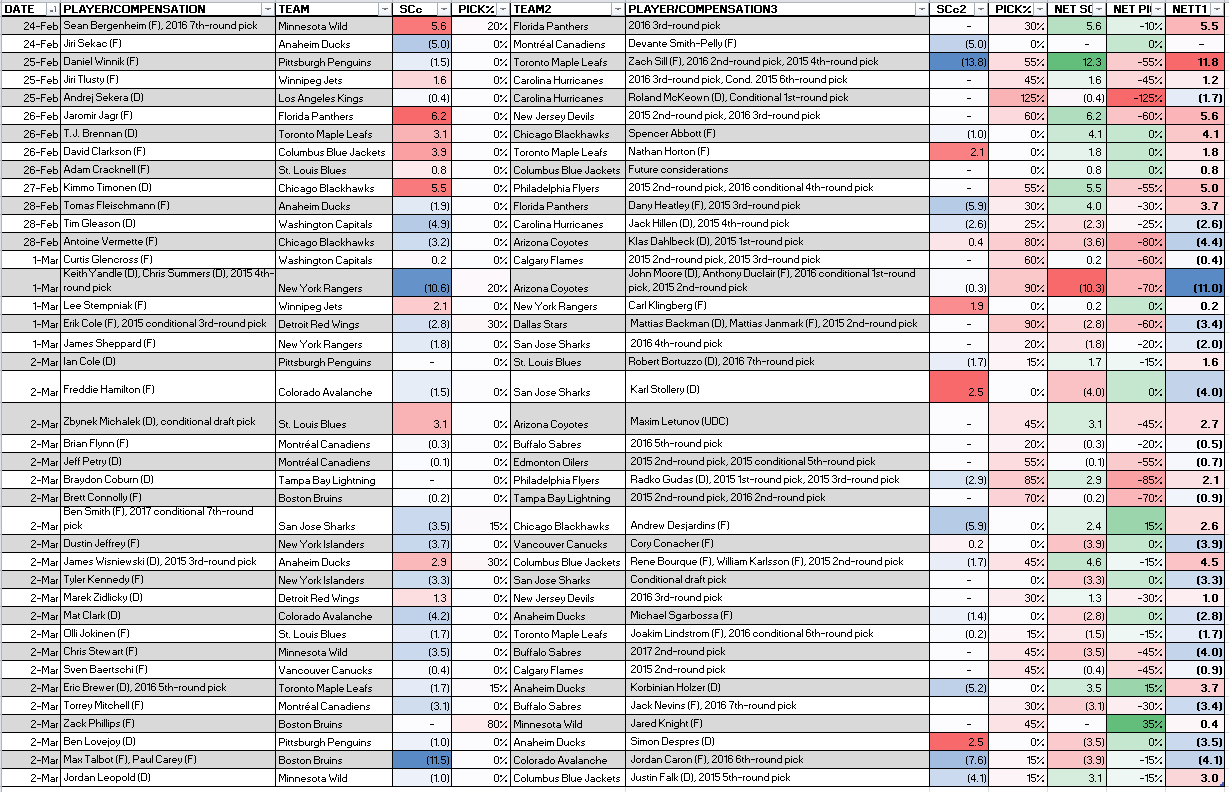